Ten years after Philly introduced Petplan, is pet insurance at its tipping point?

Following that episode, even after successful treatment for hip dysplasia, Lily's health was never the same: She was diagnosed with diabetes, then inflammatory bowel disease and, later in life, arthritis and a hemorrhaging that landed her in the vet's office for a week. Insulin treatments, glucose monitoring, laser therapy for her arthritis — those costs, for a dog, could bury anyone in debt or, in worst-case scenarios, in guilt. But it didn't bury her: Countless procedures and clinic overnighters later, Wallace shelled out only $12,000 out of pocket for Lily, out of $61,000 of total expenses since that first vet visit in Spring 2010.

Truly, the insurance rescued her from one of the heaviest decisions a pet owner can be faced with.

"It’s one of those things you can’t plan for. One day she’s bleeding out of her nose and you're faced with those decisions, and to be able to make them based on quality of life, as opposed to ‘Can I afford this?’ is a real blessing," Wallace, of Bala Cynwyd, told PhillyVoice. "I would think, for people who love their pets like family, there’s an enormous amount of guilt if you can’t pay for treatment that could save your dog or give them a better quality of life.

"I certainly did not have any of that guilt."

While pet insurance has literally been around since Lassie, it's still a relatively foreign concept to most Americans. 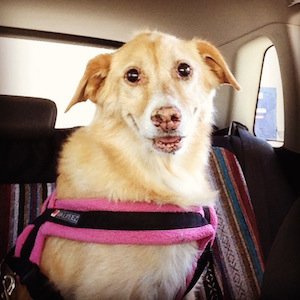 Lily, Kelly Wallace's dog, lived to be 11 years old. She credits the peace of mind pet insurance afforded her for the extended years Lily had to live, undergoing expensive treatments at veterinary clinics.

As of the end of 2015, 1.4 million pets are insured in the United States; while an impressive number on its own, that's less than 1 percent of the approximately 169 million pets that exist in the U.S., and a stark contrast to the United Kingdom, where nearly a quarter of all pets are insured. Moreover, the $689 million Americans spent last year on pet insurance premiums happens to be a sliver of the $15.73 billion American pet owners spent on veterinary care in 2015.

So why aren't more Americans lining up for pet insurance? Don't blame it on premium costs, say Newtown Square-based Petplan founders Natasha and Chris Ashton, who first brought the simple-as-pie U.K. model of pet insurance to the U.S. in 2006.  (The U.K. version of Petplan is the world's leading pet insurer.)

“We offer a range of prices, so you can choose the premium for your pet that makes your budget," Natasha Ashton told PhillyVoice. "We have people who pay $20 per month, all the way up to $100 per month. It depends on the pet and the coverage you choose. But it means offering people choices so they choose the plan that works for them.”

Indeed, nationally, the average monthly premium is about $39, according to June 2016 data from the North American Pet Health Insurance Association — hardly highway robbery, given that a third of all pets are likely to suffer from an unexpected accident or illness in any given year. There's also the matter that costs depend on variables like age, breed, what kind of animal it is and what zip code they live in (because vet costs vary by region).

The simpler truth, the Ashtons explained, is that people are still unaware pet insurance even exists.

“It takes people having a positive experience with the product, and multiple things need to happen: You have to buy a policy, the pet has to get sick, then you have to go to the vet, you have to have a good experience through the insurance company — happening more and more with Petplan — and then you tell your friends and your vet," Chris Ashton explained. "It’s that cycle. But it takes a while.”

But the future is bright for pet insurance, they insist, even if the enrollment is still modest, with an annual growth rate of 12 percent between 2014 and 2015.

Wallace: One day [my dog’s] bleeding out of her nose and you're faced with those decisions, and to be able to make them based on quality of life, as opposed to ‘Can I afford this?’ is a real blessing.

“We have seen new companies come to the marketplace, and what's really exciting, that speaks to the shift in the industry, and that [indicates] we’re at the tipping point now, is the big insurers are coming in a big way," Natasha Ashton said. "Nationwide is promoting aggressively, and Liberty Mutual has put in a new filing. So, we’re seeing the big insurers now taking an interest, and that speaks volumes as to where the industry is headed.”

Nationwide Insurance acquired VPI — the oldest U.S. pet insurer — in Fall 2014. Beyond that major shake-up in the relatively small industry (there are only about 11 American insurers), employers have also hopped on board the pet insurance bandwagon, offering pet insurance as a benefit to employees. Locally, the Children's Hospital of Philadelphia and the Philadelphia Zoo both offer pet insurance in some benefits packages.

As for why people aren't individually seeking out insurance policies, Dr. Grace Mengel, staff veterinarian at Penn Vet, speculated that a larger culture of complicated health care — especially when compared with an established single-payer system in the U.K. — and a general lack of awareness are what keep the pet insurance industry back.

"It’s often not until people are faced with the reality and they deal with that cost that they think about it," she said. "I think awareness is important. And I think, in the vet world, [it's important that] when people get a new pet, a new adopted pet or a new puppy, that we make them aware of pet insurance. That it exists."

Particularly because veterinary care is advancing at a rapid rate — meaning it's getting awfully expensive to send in Little Fido for a multi-thousand-dollar MRI or stem cell treatment. Not to mention most plans, including those offered by PetPlan, do not cover preexisting conditions; in that case, it's better to insure a pet when they're younger, and is likely why many shelters offer trial pet insurance plans upon adoption.

Regardless, the potential for pet insurance to permeate the masses is there: Projections estimate that annual pet spending will tick up to nearly $63 billion in 2016. The point being that owners are willing to spend the money on their pets. And, in truth, imagining a do-or-die scenario in the emergency room with a pet who feels like a family member may be enough to usher in a new wave of pet insurance adoptees.

"Knowing treatment is available and you can’t afford it, that’s heartbreaking," Wallace said. "I’d love to save people that heartbreak.”