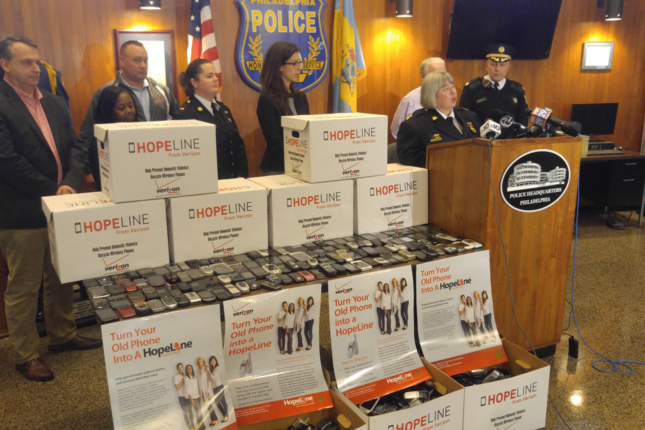 There are plenty of old cell phones and accessories collecting dust in homes throughout Philadelphia, but they could soon be a life-saving tool for local victims of domestic violence.

The Philadelphia Police Department the Fraternal Order of Police Lodge 5 announced Wednesday they have partnered with Verizon and Women Against Abuse again to collect used cell phones that will be refurbished and eventually given to abuse victims.

The PPD, @Verizon & @WomenAgnstAbuse have teamed up for the #HopeLine program. Drop your old, unused phone in the bin at any PPD district! pic.twitter.com/v7UTMcTtbY

The program is called HopeLine, which Verizon started in 2001. The company has collected more than 12 million phones, including more than 700,000 last year alone.

Boxes have been placed in each police district in the city to collect used phones, batteries and other accessories.

Verizon will collect the goods, erase the phone's contents and donate them to Women Against Abuse, a local nonprofit agency that serves nearly 15,000 annually.

“Our city’s officers see the impact domestic violence makes firsthand as they respond to more than 100,000 emergency 9-1-1 calls that are domestic in nature each year," said Jeannine L. Lisitski, the organization's executive director and president. "Programs like HopeLine from Verizon creates safety for women, men and children who are seeking to break free from the cycle of abuse and rebuild lives of peace and hope.”

Women Against Abuse will distribute the phones to victims of abuse to make free calls to 9-1-1 when needed.