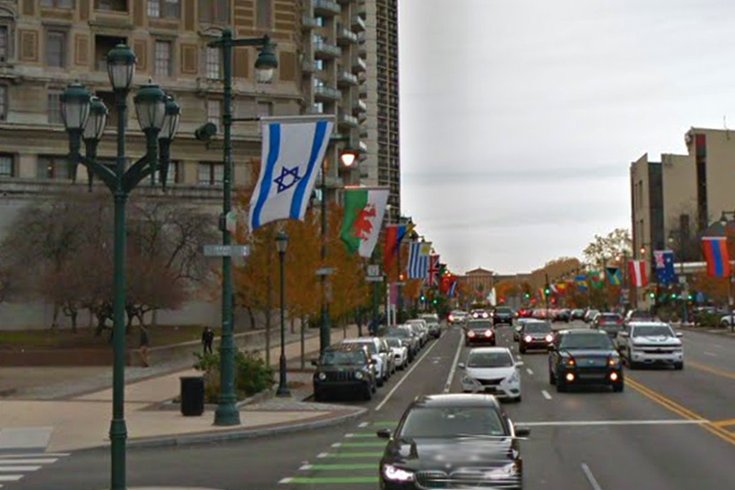 The Israeli flag flies at 16th Street and the Benjamin Franklin Parkway in Center City.

The Philadelphia District Attorney's Office announced Friday afternoon that it will seek to re-arrest a man suspected of vandalizing the Israeli flag that hangs along the Benjamin Franklin Parkway.

Prosecutors initially declined to bring criminal charges against Antione Guyton, because additional investigation revealed at least one additional suspect, according to the D.A.'s Office.

Authorities also are looking looking to identify another suspect involved in the vandalism. That individual allegedly was the first person to spray the flag with red dye or paint, doing so with a water gun, the D.A.'s Office said.

But the additional investigation allegedly further implicated Guyton in the vandalism. The D.A.'s Office declined to offer details.

"We have no further comment at this time due to the ongoing nature of the investigation," a press release stated.

Anyone who can identify the additional suspect, shown in the video below, is asked to contact Central Detectives at 215-686-3093.

The flag near 16th Street and the Parkway, where hundreds of other nations' banners hang, was defaced on Tuesday afternoon.

Members of the Jewish Federation of Greater Philadelphia discovered the vandalism around 3:30 p.m. They reported it to police before going outside to confront Guyton, who allegedly dropped the gun and ran away.

Guyton later returned to the scene and police arrested him after he told them he painted the flag. The flag was replaced later Tuesday night.

The incident occurred just one day after 60 Palestinians reportedly were killed by Israeli forces near the Gaza-Isreal border during protests against the United States for moving its embassy from Tel Aviv and recognizing Jerusalem as Israel's capital.