Philly women descend on Washington to push back against new president

By Staff and wire reports 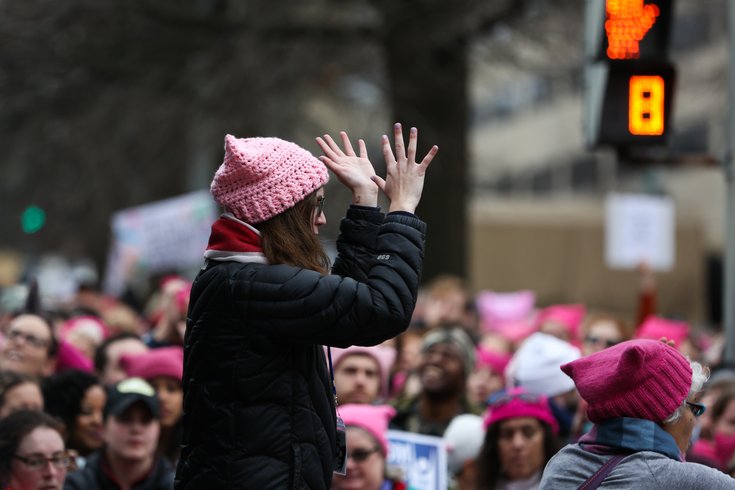 Protesters march in Washington D.C. for the National Women's March on Saturday, Jan. 21, 2017. Groups from Philadelphia and across the country traveled to the nation's capital to rally for women's rights and in defiance of newly-inaugurated President Donald Trump.

Determined to push back against the new president, thousands of women — from Philadelphia and across the country — descended on the capital Saturday for a march aimed at showing Donald Trump they won't be silent over the next four years.

Organizers of the Women's March on Washington expected more than 200,000 people to turn out for a more orderly show of force than the chaos created by self-described anarchists who took to the streets on Inauguration Day in a series of clashes that led to more than 200 arrests.

The scene on Saturday was much more peaceful, according to attendees. Eva Rivkin, 21, of Glenside, Montgomery County, said it was great to see so many women working together while standing along Independence Avenue.

"We want to stay together and make history, and it's absolutely incredible," said Rivkin, who works with students in the Philadelphia School District. She said it was great to see so many men joining the march as well.

"It's incredible to have men to support us, too," Rivkin said, adding that they'll likely need male allies to push back against the Trump administration. She attended the rally with sister Jordan and mother Lori.

Jordan Rivkin, 25, said seeing so many women join together was lifting her spirits after feeling "depressed" for the past two weeks leading up to Trump's inauguration Friday.

"It's very empowering here," she said. "We've got a lot of supportive women here."

Hundreds of anti-Trump marches were planned elsewhere across the country, including in Philadelphia, and around the world. 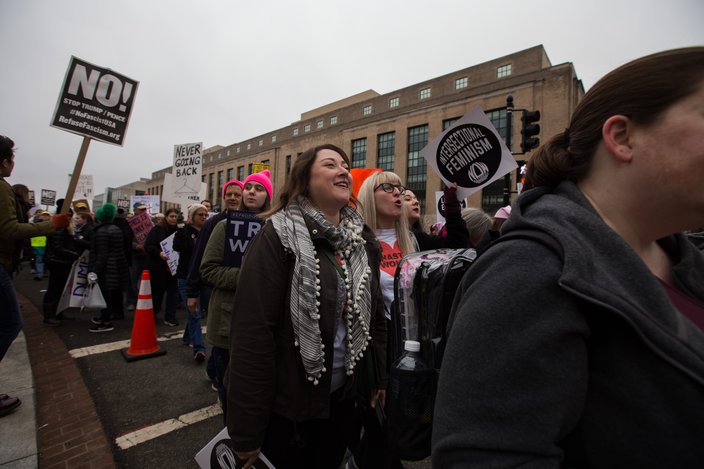 Protesters march in Washington D.C. for the National Women's March on Saturday, Jan. 21, 2017. Groups from Philadelphia and across the country traveled to the nation's capital to rally for women's rights and in defiance of newly-inaugurated President Donald Trump.

"This will let this administration know that the rhetoric that surrounded the campaign wont be tolerated over the next four years," Valtieri said.

Hours before the women's event in Washington began, people were streaming into the city, many wearing bright pink hats and wielding signs with messages such as "The future is female" and "Less fear more love."

Rena Wilson, of Charlotte, North Carolina, said she hopes the women can send Trump a message that they're "not going anywhere."

Joy Rodriguez, of Miami, arrived with her husband, William, and their two daughters, ages 12 and 10.

"I want to make sure their rights are not infringed on in these years coming up," Joy Rodriguez said.

March organizers said women are "hurting and scared" as the new president takes office and want a greater voice for women in political life.

"In the spirit of democracy and honoring the champions of human rights, dignity and justice who have come before us, we join in diversity to show our presence in numbers too great to ignore," their mission statement says.

Retired teacher Linda Lastella, 69, who came from Metuchen, New Jersey, said she had never marched before but felt the need to speak out when "many nations are experiencing this same kind of pullback and hateful, hateful attitudes."

"It just seemed like we needed to make a very firm stand of where we were," she said.

Rose Wurm, 64, a retired medical secretary from Bedford, Pennsylvania, boarded a Washington-bound bus in Hagerstown, Maryland, at 7 a.m. carrying two signs: one asking Trump to stop tweeting, and one asking him to fix, not trash, the Obamacare health law.

"There are parts of it that do need change. It's something new, something unique that's not going to be perfect right out of the gate," she said.

Women and other groups were demonstrating across the nation and as far abroad as Myanmar and Australia.

In Sydney, thousands of Australians marched in solidarity in Hyde Park. One organizer said hatred, bigotry and racism are not only America's problems.