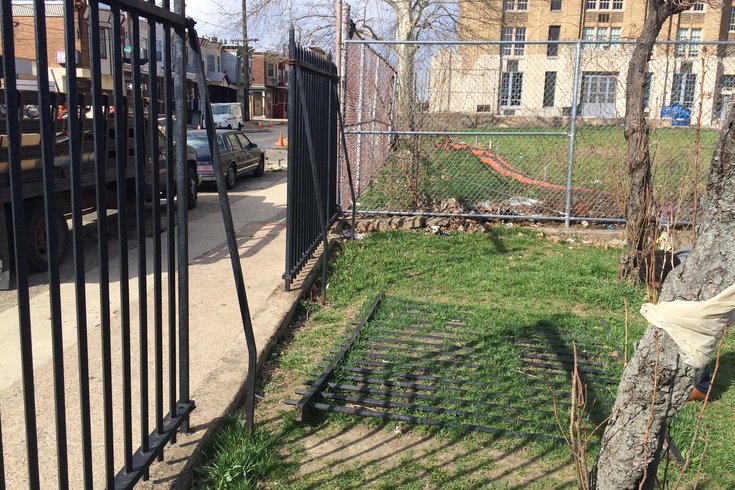 This file photo shows damaged fencing at the Cecil B. Moore Recreation Center in Philadelphia's Strawberry Mansion neighborhood. The city's plan to invest in its parks and recreation centers was featured in The New York Times on Sunday, along with plans other U.S. cities have to improve their respective public green spaces.

When Philadelphia Mayor Jim Kenney was elected to lead City Hall, the centerpiece of his vision for the city's future became a massive initiative to revitalize parks, recreation centers, playgrounds and libraries in neighborhoods across the city.

Behind the ambitious, $500 million proposal was the mayor's strong belief that inviting public spaces amount to more than decorative nice-to-haves for Philadelphia's families and visitors. They are instead the foundation of a pride of place that glues communities together, reinforcing to residents that their elected leaders are committed to upholding standards and delivering amenities that impact their lives.

To get there, of course, Kenney had to wage a heated battle to gain passage of a tax on sugary beverages — the first of its kind in a major American city — that has prompted opponents of the seven-year infrastructure plan to protest the administration and question whether parks and recreation investments are worth the hit to urban consumers.

In a comparative piece published Sunday, The New York Times looked at what's driving such heavy parks investments in cities like Philadelphia, Seattle and Chicago, which have have all focused on renovating local spaces using various sources of funding.

From Philadelphia to Seattle, other American cities are also banking on parks and public spaces to drive social and economic progress. Parks may not seem particularly urgent compared with the latest gangland murder epidemic; but the effort in Chicago to improve and expand them has, neighborhood by neighborhood, delivered long-term rewards ...

Changing demographics, new technologies and evolving demands by residents on parks and libraries to be complex community hubs require that these places receive more than just a fresh lick of paint or sod.

The Rebuilding Community Infrastructure initiative, nicknamed the Rebuild, will be financed with a $100 million donation from the William Penn Foundation and a $300 million municipal bond issue, with plans to obtain an additional $100 million in state and federal grants. It remains partially on hold until litigation surrounding the sugary drinks tax, still under review by the Pennsylvania Commonwealth Court, reaches a resolution.

“We want every Philadelphian to be able to walk to a place that says, ‘You are worth it,’” Philadelphia Department of Parks and Recreation Commissioner Kathryn Ott Lovell told the Times.