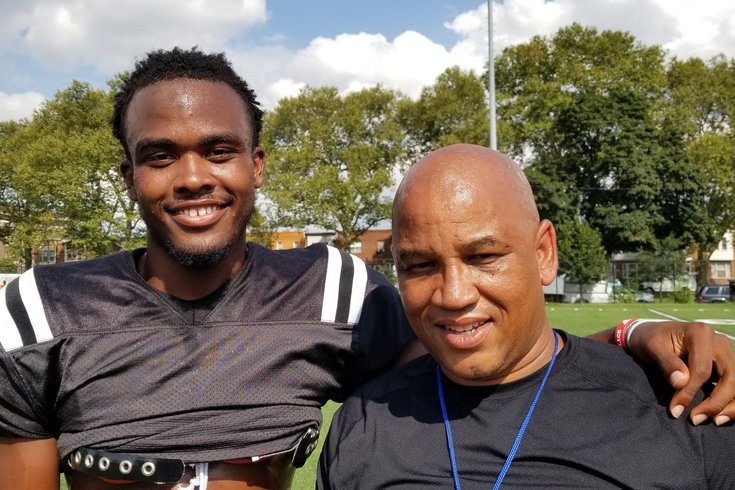 These things usually start out this way, on a nonchalant whim. Midway through last season, Tysheem Johnson, Neumann-Goretti’s lightning-fast junior tailback, was having his way with the defense during one practice. Bouncing on his toes, feeling good about himself, Johnson was having some fun with his teammates when he laughed and belted out to no one in particular, “Just call me Superman.”

The 5-foot-10, 190-pound “Superman” may arguably be the most exciting player in Pennsylvania. He’s certainly one of the most talented, garnering 20 scholarship offers from Penn State to Wisconsin, Ohio State to Michigan, and Florida to Stanford.

After rushing for 268 yards on 26 carries, averaging an astounding 10.3 yards a carry and scoring three touchdowns in Saints’ victories over Bloomsburg (22-7) and Archbishop Ryan (30-0), Johnson has Neumann-Goretti heading in a positive direction. A PIAA 3A team, the Saints have already equaled their victory total of 2018, after going 2-5 last year.

This season, Neumann-Goretti is a talented team that is capable of playing into December.

At the hub of the rejuvenated program is Johnson, who went both ways last season as a receiver and safety. This year, he’s been primarily used as a tailback who’s dangerous in space.

“Right now, I love it,” Johnson said. “I’ll be used in certain situations on defense, if we need an important stop. I feel great later in games.  We’re a more experienced team that has more depth this year. I feel stronger. We had a tough time last year, but we were a young team, a very young team.

“We expect to win every game this year. We have a lot of people back this year. Our guys our mentally stronger and we know the system. Last year, we were kind of learning the system as we were going along.”

Johnson’s goal is to score more than 40 touchdowns this season, and break the single-season city record for touchdowns (currently held by Imhotep Charter’s Mike Waters 45 scored in 2015). Johnson would also try and break his personal record of six TDs in a game, when he scored six touchdowns in the Saints’ season opener against Bonner-Prendergast.

Johnson doesn’t wear a Superman t-shirt under his pads or brand a Superman tattoo anywhere. But he likes that the nickname has stayed with him.

“I just remember just standing around in practice and I was having a good day, so I just said it joking, ‘Just call me Superman,’” said Johnson, who will commit to a college after his senior year.

By the way he’s playing, Johnson is sure to create more converts to Neumann-Goretti’s budding Superman.

“Tysheem reminds me of a Desmond Howard, Charles Woodson type, who we can use multiple ways, and can hurt you in so many different ways,” Saints’ esteemed coach Albie Crosby said. “I believe the sky is the limit for Tysheem. His teammates do a lot, which allows him to do the things he does.

“Tysheem still plays defense when needed, but we’re trying to keep him fresh. Every year I watch him, Tysheem gets better and better. He’s a great student of the game and he’s a big key to our success. But his teammates are bracing him and they’re helping him create that success.”

Games to watch this week

St. Joe’s Prep continue on their national schedule with another powerhouse, St. John’s College of Washington, D.C. The Cadets are 2-0 and are loaded, nationally ranked No. 4 by USA Today, featuring LSU-bound wide receiver Rakim Jarrett, BYU-committed quarterback Sol-Jay Maiava and Georgia-bound linebacker Mekhail Sherman. The Hawks, who are coming off a heartbreaking 21-17 loss to Marietta, Georgia, where Ohio State-bound junior quarterback Kyle McCord was 20-of-33 passing for 249 yards and two touchdowns, which included a go-ahead TD pass to Sahmir Hagans with 1:18 to play.

La Salle was supposed to be good this season, but not this good. The Explorers won with defense in a 15-12 season-opening victory over Imhotep Charter, then used defense and offense last Friday in a surprising 42-6 romp over North Penn, going mercy-rule mode (by PIAA rules, the mercy rule goes into effect in the second half when one team goes ahead by 35 points or more) over the perennial District 1 power. Junior quarterback Lonnie White, a Clemson commit for baseball, runs the offense. The Friars are looking to rebound from an opening 34-13 loss to McDonogh (Owings Mills, MD) last week.

This is the season opener for both teams. St. Joe’s features lightning-fast senior tailback Jada Byers, while Highland counters with junior Johnny Martin III, who rushed for 2,002 rushing yards and 19 TDs as a sophomore. Martin, who’s 5-foot-9, 210 pounds, has received offers from Temple, Syracuse, West Virginia, Rutgers and Baylor. Byers, who’s listed at 5-7, 160 pounds, is looking to catch the eye of a Division I program after scoring 35 touchdowns last season.