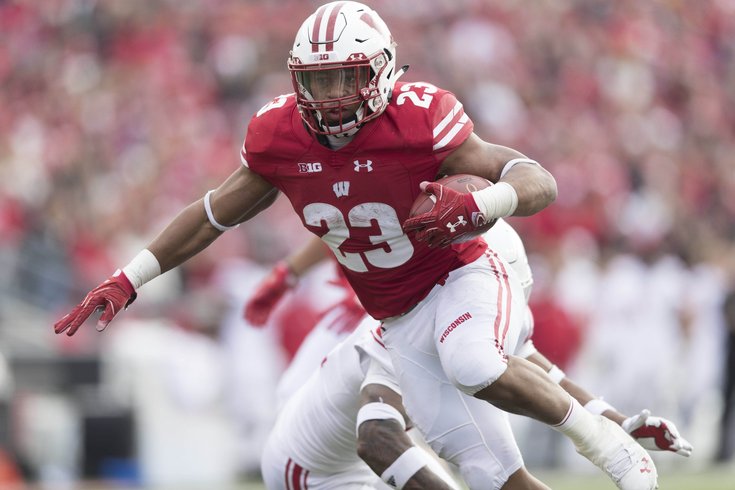 As much as he tries to ignore it, he can’t. Jonathan Taylor tends to be everywhere in Madison, Wisconsin, including highway billboards. The Badgers’ tailback, by way of Salem High School, in South Jersey, will glimpse at a few passing by, flash his mega-watt smile and continue looking ahead.

That could be Jon Taylor’s mantra: Smile and continue looking ahead.

The 5-foot-11, 220-pound junior tailback won the prestigious Doak Walker award last year as the finest running back in the nation, after rushing for 2,194 yards and 16 touchdowns, averaging a remarkable 7.1 yards per carry.

Taylor is on the brink of rare company this season, as only the third possible repeat winner of the Doak Walker, seeking to join Texas’ Ricky Williams (1997 and ’98) and Arkansas’ Darren McFadden (2006 and ’07).

What’s more, Taylor is on the short list of Heisman Trophy candidates this season.

To Taylor, though, none of that really matters.

He keeps smiling and looking ahead, refusing to get trapped by the hype.

“Because it doesn’t mean anything unless I perform,” Taylor, who carries a 3.5 GPA, told PhillyVoice last week in an exclusive one-on-one. “I think within the program, I’ve matured a lot as a player. Everything that goes on, coach may say, ‘Tomorrow, we’re going to do this.’ Now, being here, it’s allowed myself to get situated and I know what’s to come and it’s about executing.

“What’s helped me (in dealing with all of the hype) is not taking anything for granted, and appreciating each and every single thing that you do. It can all be taken away tomorrow, just like that. Nothing is given, everything is earned. It’s important that you understand the things that you’re doing is to become a better player and a better teammate.

“You don’t do these things to get looked up (on google). You do it to be the best player you can be.”

Taylor admitted it’s been “cool” to get the attention. Social media is everywhere. Advertising is everywhere. He’s the face of a major college football program that could be playing for a national championship.

Taylor played at 220 pounds last year, and stayed there throughout the summer. He said his body shape is different. These 220 pounds is far different than the 220 he played with last year. He’s leaner, able to undergo a more regimented diet.

He said he feels more “fit” and his nutrition is better. He feels more explosive, and more energetic—and faster, a scary thought for opposing Big Ten defenses.

He also says a big goal this coming season is to be more consistent.

“I know my freshman year, I was a first- and second-down back, and that was because I was young trying to learn everything, and the coaches didn’t want to put too much on my plate,” Taylor said. “Last year, I able to learn the third down realm and I was able to actually show flashes of that my sophomore season.

“This year, along with being consistent on first and second down, I want to be out there on third down and put great football on tape.”

Taylor had eight receptions both his freshman and sophomore years. Wisconsin is primarily a running team. But Taylor, as he proved in high school, as did former South Jersey and Wisconsin star Corey Clement proved, he can catch the ball out of the backfield.

There is a chance Taylor can be used in space this year.

“That’s definitely a goal, to put more good football on tape this year,” said Taylor, a Maxwell Club Jim Henry Award winner who is on time to graduate with a degree in philosophy from Wisconsin. “Our entire running back group has been working on.

“Personally, I’ve never been a champion. I didn’t win a state title in high school. One thing we’re doing here is taking each day as a new day in order to fix whatever we can. The goal is definitely a Big Ten championship.”

“I think Taylor is a diverse back who can do a lot of different things, and that’s what makes him pretty special,” Wolpert said. “He can beat you with speed and power. He runs inside of the box very well, able to get north-and-south into the second level very quickly. He’s an NFL-style running back who has the size and speed to be very productive at the next level.

“He also has the ability to bounce. There are only a few guys in college football who have the skill set that can do the things Jon does. Jon was a semifinalist for the Maxwell award last year. He’s a special talent and he’s someone we’ll be keeping a close eye on as the season unfolds.

“Jon is one of the rare guys who won the Jim Henry award and can come back to win a Maxwell Club college award. Dan Connor was the last player from this area to do that, winning the Bednarik award and the Henry award. If he stays healthy, and Wisconsin has success, Jon will be on the radar screen for a lot of different awards at the end of the year.”

For now, Taylor is thinking ahead and waiting for the season to arrive.

As for the Heisman talk and the other awards, Taylor’s main focus is a Big Ten championship.

“Everything you do on the field is to place the team in the best position possible to win, that’s my focus,” Taylor stressed. “The Heisman talk has been around. That stuff started coming around after my freshman year, but we didn’t accomplish what we wanted as a team. My sophomore year, we didn’t have the season we wanted.