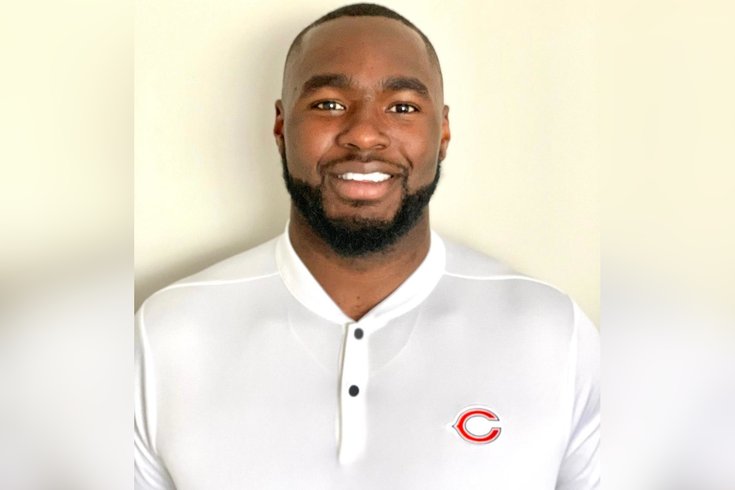 Ronell Williams was leaning on a pool table by himself in the rec area of Georgia Tech’s athletic complex, when he received a call on the afternoon of Wednesday, January 16. The 2010 Chester High graduate and Division II All-American West Chester linebacker squinted as he looked down at his phone.

Then Williams looked again, as if trying to convince himself the name on the other end was right.

It was Matt Nagy, the Chicago Bears head coach and the NFL’s 2018 Coach of the Year.

“Hey, Ronell,” Nagy said, “would you like to come up here to Chicago for an interview?”

A day later, Williams, 27, was a member of the Chicago Bears coaching staff, as the Bears’ new defensive quality control coach.

It’s been a whirlwind odyssey Williams has taken to this destination, from being a volunteer coach just three years ago to the NFL. With his unrelenting work ethic, intelligence and fearlessness when it comes to new endeavors, Williams’ nascent coaching journey will continue moving forward before it reaches its ultimate objection one day in becoming a defensive coordinator or head coach.

Williams was a standout linebacker at Chester, recruited by Villanova and Temple, before settling on West Chester, where he became the first sophomore and third defensive player in school history to earn first-team All-America honors by the American Football Coaches Association (AFCA) in 2012.

But coaching wasn’t a clear passion until he was a volunteer linebacker coach in 2016 at Widener under defensive coordinator Bill Shuey, a former Eagles’ linebacker coach and who coached and developed Williams at West Chester.

Before that, Williams was working two jobs, balancing 15-hour days between Elwyn and Glen Mills. On his days off, he would volunteer coach the linebackers at Widener.

“I didn’t know I had a passion for coaching until then,” said Williams, who graduated West Chester in 2014 with a degree in pre-occupational therapy and a graduate degree in higher education from Temple in 2018. “When I played, I always appreciated learning the details of the game and I always appreciated staying connected to the game after I was done playing.

“The cool thing was, my coach in college, Bill Shuey, was a former linebackers coach for the Eagles under Jim Johnson, and when he left, he volunteered as a linebacker coach at West Chester.

“Coach Shuey created a different passion in me besides being a physical force on the field. I started looking more at film and breaking every detail down. I found out I loved it. The other thing you gain is a passion for learning. You start to become as connected to preparing for the game as much as you love playing in the game. You know where the ball is going and that felt good.

“That’s what started it for me.”

Williams, an excellent communicator, then moved on Temple in 2017 under new Owls’ head coach Geoff Collins. At Temple, Williams served as a defensive analyst for two years, arriving at the Owls’ Edberg-Olson Football Complex on 10th and Diamond Street at 5:30 a.m.

He wouldn’t leave until 10 p.m. during the season.

I could never take the easy road or the shortcut to get anywhere. I can’t do it and I won’t do it. You have to learn and put your time in. That goes with anything you have a passion for.

And Collins was very demanding. Williams broke down film, studied opponent’s tendencies, made presentations to the assistant coaches.

“Coach Collins likes structure and that taught me structure,” Williams said. “But Geoff never lets you be satisfied. Everyone around him has to up their game. Once I mastered my job, I was able to help my players become better players and better young men.”

Under Collins, the Owls went 15-10 over two seasons, and in 2017, won the Gasparilla Bowl, the program's first bowl win since 2011 and just its third in school history.

“I started to think and see things from an offensive perspective,” Williams said. “Geoff Collins is a true mastermind. He taught me the importance of branding and the true importance of culture. I can’t speak highly enough about coach Collins and coach Shuey.

“They created a different passion in me to one day be a coordinator or a head coach in the future. Each stop, I’ve learned a different perspective. What I credit the most is my home foundation.”

Ronell’s work ethic comes from his parents, Ronald and Bernadette Williams, who raised six children in Chester. Bernadette recently opened Aunt Bee’s Country Kitchen, a lifetime passion of hers that took her a year to put together.

Collins liked Williams so much that when he got the job at Georgia Tech, he asked Williams to come with him in 2019, but not before he did a summer internship with the Bears. Williams got reacquainted with Shuey, and it presented him with the chance to thank him.

In early-January, a few weeks on the job at Georgia Tech, while living at the football complex looking for housing, Williams received the call from Nagy.

Nagy spent three years with the Eagles, two as the offensive quality control coach (2011-12), inheriting the position from Doug Pederson, who was promoted to the Eagles’ quarterback coach in 2011.

Many of today’s NFL head coach and coordinators started at the bottom.

“I could never take the easy road or the shortcut to get anywhere,” Williams said. “I can’t do it and I won’t do it. You have to learn and put your time in. That goes with anything you have a passion for.

“But when coach Nagy called, I had his phone on my cell. So, his name popped up and asked me if I would like to come to Chicago for an interview. Out of respect, I owed coach Collins a call to let him know. The man was so good to me. The problem was, he was in Japan and I couldn’t get a hold of him for two days.”

The biggest thing for me is the impact for the ones who come after me, at Chester, at West Chester, at Temple and I learned that hard work and dedication was there.

On Thursday, January 17, Nagy offered Williams a position and he accepted.

But he needed to reach Collins.

“I kept calling, and calling coach Collins, and the next thing you know, someone sent me a link that I was added to the Bears’ staff,” Williams said. “I tried a few people who might be able to reach him.

“I finally got a hold of coach Collins and he sent me off with his blessings. He let me know that he appreciated me and that he’s always believed in me.”

That gave Williams peace of mind. Then, he had to tell his family.

“I wanted to make sure my family knew that all of their sacrifices they had to make paid off,” Williams said. “That was my one time to say thank you to everyone around me. Every chance I get, I say thank you, and I mean that for everyone who’s touched my life.”

The Bears, who will be good again this year, visit the Eagles in Week 9, on Sunday, Nov. 3. Williams knows he’ll be getting a ton of ticket requests for the game.

Williams earned each step on this continuing path. The determination was always there.

“The biggest thing for me is the impact for the ones who come after me, at Chester, at West Chester, at Temple and I learned that hard work and dedication was there,” Williams said. “I know where I’m going and it’s a good thing. I finally got a chance to treat my parents, so I flew them out to Chicago and showed them the city for a week.

“They showed me the importance of education and what hard work can do. This is where I am and where we are. You can feel their joy and their pride. I can’t wait for training camp.”