The St. Joe's prep alum will have the Georgia backfield all to himself 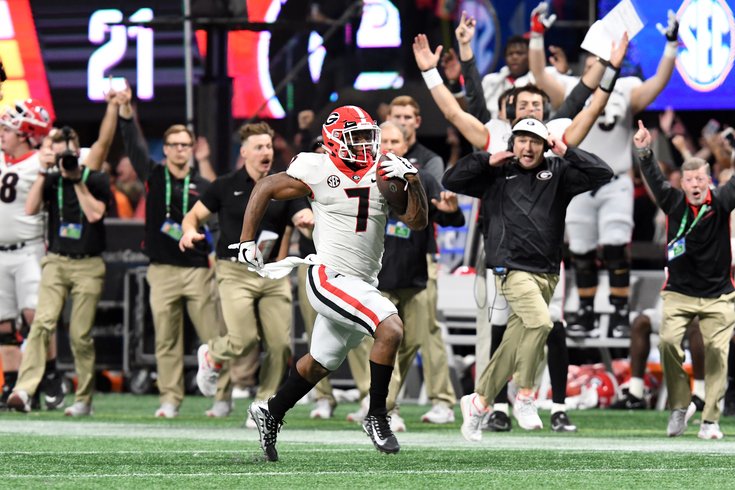 Photos courtesy of the University of Georgia Athletic Department/for PhillyVoice

D'Andre Swift is finally at 100 percent. Will he bring hardware to the Bulldogs?

The tolerance began early. D’Andre Swift never wanted to come off the field when he first played football, so he learned to hide the winces and gnashed his teeth. He was always the one who had the ball more than anyone else, and, consequently, got hit more — that is, the rare times when anyone was able to catch him.

The former St. Joseph’s Prep star tailback once ran for a 60-yard touchdown with a strained, tightening calf muscle. As soon as he crossed the goal line, he flopped on his back so trainers could massage the calf area — then argued he wanted to go back into the game.

There is something that’s about to explode on the nation’s college football landscape this season: A healthy D’Andre Swift running at 100 percent for the Georgia Bulldogs.

It’s a frightening prospect for the rest of the Southeastern Conference, the deepest, most talented bed of college football programs in the country.

Despite groin and ankle issues his sophomore year, Swift still led Georgia with 1,346 yards from scrimmage and 13 touchdowns. He rushed for a Bulldog-best 1,049 yards and 10 TDs, while catching 32 passes for 237 yards and 3 TDs. He averaged 6.4 yards a carry and 9.3 yards a reception. On 195 touches, he averaged 6.9 yards.

What’s more, he did it over the second half of the season, battling the groin and ankle problems the first seven games in 2018.

This season, Swift is high on many Heisman Trophy and Maxwell Club watch lists.

Nick Chubb is gone. Elijah Holyfield, the son of heavyweight great Evander Holyfield, left last year. This is now Swift’s team, and it couldn’t come at a better time. Georgia is considered in most top-25 polls among the nation’s top 5 teams, coming in mostly at No. 3, behind defending national champion Clemson and perennial power Alabama.

Over the last five years, counting back to his extraordinary career at The Prep, the Philadelphia-native has only played at about 70 percent of what he’s capable of doing.

Swift, the 5-foot-9, 211-pound future NFL first-round draft pick, had been combatting for years microtears on both sides of his groin, which the Georgia medical staff found and corrected through surgery in January 2018.

“I’m not really good with percentages, I just know last year that I wasn’t 100-percent; I wasn’t myself,” admitted Swift, who maintains a 3.45 GPA in communications and is on schedule to graduate early. “It was frustrating to know that I’m out there, people expect me to be 100 percent, regardless of what was going on.

“I tried my best to put on my best performances. But as the season got deeper, I was in better shape as far as injuries. Now, I’m good. This is one of the best off-seasons I’ve ever had.

Swift knows the offense. He’s a dual-threat back, able to both catch the ball swinging out of the backfield, and able to pop a long run.

“First and foremost, we have a great team and the main goal is to come out of the SEC East and have a healthy season,” Swift said. “With success, everything else comes with it. I know the (Heisman) talk. I mean it’s hard not to pay attention to it. I see it, but I try not to pay too much attention to it, because I still have to go out there and perform.

“None of that other stuff is going to happen if I don’t do my job. It would be great to be in the Heisman conversation. It’s every kid’s dream. But team goals come before anything. I have a voice now. I know the offense; I know the team.”

Georgia has won two national championships, one in 1942 and the Herschel Walker-led Bulldogs of 1980.

He also radiates a confidence both on and off the field. He hasn’t let the bright lights change him, which is a credit to his parents, Darren and Ayanna. They’ve kept him grounded and provided emotional support last year when he had to break through the threshold of adversity.

Georgia football is as religiously followed in Georgia as the Eagles are here, possibly even more so. Everything Swift does, every move he makes on the field is scrutinized. The eyes are about to increase to a national lens this year.

“For the most part, I think last year was D’Andre’s most challenging year, and the reason being is because of the adversity, which was something he never really had to deal with before then,” Darren said. “Even as a freshman, he was able to come in and play at a high level and be successful.

“Last year, all eyes were on him. He was supposed to be the back that was going to take over. By not being 100 percent, he had to deal with the groin and the ankle injuries. When you’re used to playing at a high level, and your output is expected to equal that high level running at top speed, it’s human nature to doubt yourself when it doesn’t happen.

“Once he was able to heal up (during the week of Oct. 20), he was fine. He was able to see who he was and what he was capable of doing. Still, he was playing through injuries.”

The last five years, and Darren said it would sound crazy, D’Andre was playing injured and wasn’t aware of it.

“When he was here, I jumped on his behind about not stretching, (former St. Joe’s Prep) Coach Gabe (Infante) was jumping on him about it,” Darren recalled. “I was taking him to yoga, to specialists, and we couldn’t figure it out, not knowing he had microtears on both sides of his groin. Luckily, and we thank God for Georgia. They found out something wasn’t right.”

So Swift played hurt going back to his freshman year at Georgia. He underwent surgery on January 12, 2018, four days after the Bulldogs lost to Alabama in the national championship, 26-23, in overtime, to address the microtears.

“This will be the first time D’Andre will actually be playing at close to 100 percent in about five or six years,” Darren said.

“When he had to sit out games his senior year at Prep, that prepared him for when he got to Georgia. When he came to the Prep, he was under Olamide Zaccheaus and John Reid. They were his mentors. His strength, work ethic and tenacity he learned quite a bit from them. That prepared him for Georgia. That was devastating news he received (about the microtears) and he dealt with it.”

Now it’s up to the SEC to deal with D’Andre Swift.

The previous two years, the country has only received a glimpse of him. This year, the nation will get a chance to finally see the “True” D’Andre Swift.

And quite possibly, it could translate into Swift holding up an iconic 25-pound, cast-bronze piece in New York City on Saturday, Dec. 14.