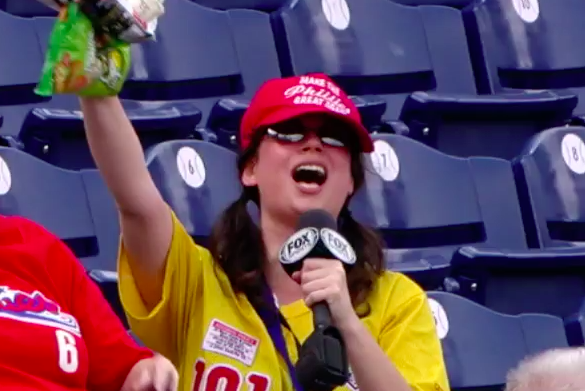 Phillies fans will no longer be wooed into buying concessions from the pigtailed woman whose siren song earned her the nickname Pistachio Girl at Citizens Bank Park.

Aramark, the food vendor for the Phillies ballpark, let her go last week in connection to the flood of publicity she's lately received for her affiliation with the oblique political movement known as the "alt-right."

Emily Youcis, an energetic fan favorite, took headlines by storm a few weeks ago after footage showed her feuding with protesters outside the National Policy Institute's Alt-Right Conference in Washington, D.C. Acting as a field correspondent, Youcis called the gathering of anti-fascist demonstrators "Commies" and was shouted down before getting sprayed with paint.

NPI widely has been characterized as a white supremacist organization that espouses anti-Semitic, racist and xenophobic views. A day after Youcis' news report in Washington, President-elect Donald Trump chose to publicly "condemn" and "disavow" NPI.

"A core Aramark value is treating everyone with integrity and respect always," Aramark said in a statement regarding Youcis. "That includes respecting our associates’ right to privacy and dealing with personnel matters confidentially. We can only confirm that the individual asked about is no longer employed after publicly connecting our company to views that contradict our values.”

Speaking on "alt-right" network Red Ice TV, Youcis, 26, told host Lana Lokteff that her firing came as a result of all the publicity she's been receiving. She says she is open to connecting with a civil rights attorney who will take on her case and get to the bottom of defining hate in the eyes of the law.

Based on her attire at Phillies games last season, Youcis' political views might have been guessed all along. During a segment for MLB.com, she sported a "Make the Phillies Great Again" ballcap and belted out a vibratoed ditty about peanuts.

Following the episode in D.C., video of which was tweeted by former Ku Klux Klan leader David Duke, Youcis told the Philadelphia Daily News that her "alt-right" advocacy is about reclaiming an identity for American white people. The anti-fascist protesters, she said, were the real purveyors of racism and violence.

But Youcis, a cult animator who has also been working on a feature-length film, could be said to embody what many critics feel is the Janus-faced nature of the "alt-right" persona.

In October, appearing on the radio show of controversial Canadian host Gavin McInnes, Youcis joked about the appeal of "white chauvinism" and agreed that Jewish people "got the ball rolling" on political correctness. With proud conviction, she stated the "alt-right" is about the preservation of the white race, although she never specified at what cost and by what means that should be accomplished.

What comes across to opponents of a movement that normalizes disrespect is an air of gloating sarcasm. It claims the vigilant mantle of anti-censorship while failing to coherently present a political culture that acknowledges difference — not as an ideal, not as a value, but as a fact.

Youcis may have felt she was "a God" at Citizens Bank Park, but she says she's relieved now to be free from the Pistachio Girl role. On her animation crowdfunding page, she griped that the "Phillies Ph------ suck now" and she was doubtful she would be able to sustain herself with dwindling crowds, anyway.

"I can devote myself full-time to the cause," Youcis said on Red Ice TV. "So I guess God willed it."