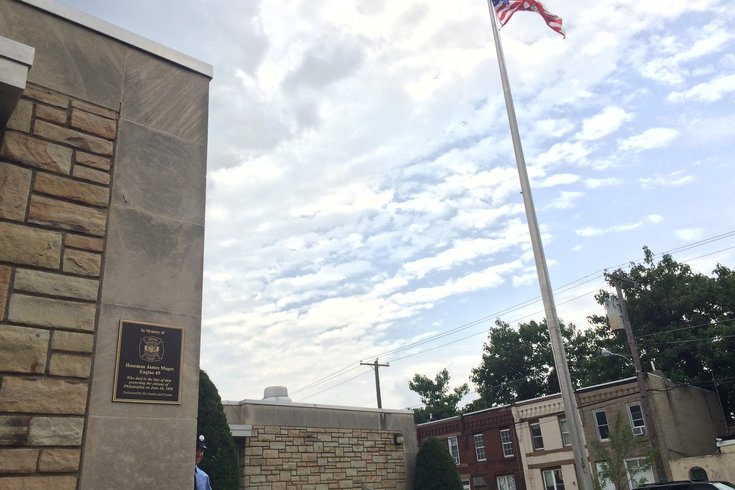 A replacement plaque - a memorial to firefighter James Magee, who died in a blaze on June 24, 1898 - was dedicated on Friday at Engine 45 in North Philadelphia. The original plaque was stolen in March.

In March, a plaque dedicated to fallen firefighter James Magee was stolen, ripped right out of the ground near the site where he died.

On Friday,  when a replacement plaque was installed at Engine 45  on the 2500 block of West York Street in North Philadelphia, Harry Magee, great-grandson of the fallen firefighter – himself a member of Philadelphia's Fire Department for nearly 40 years – said it was good to have the plaque back "home."

"I think that this, actually, it's not a sad day for me. James actually came home today," he said.

And with Friday's installation ceremony, the plaque was installed 118 years – to the day – of Magee's death. 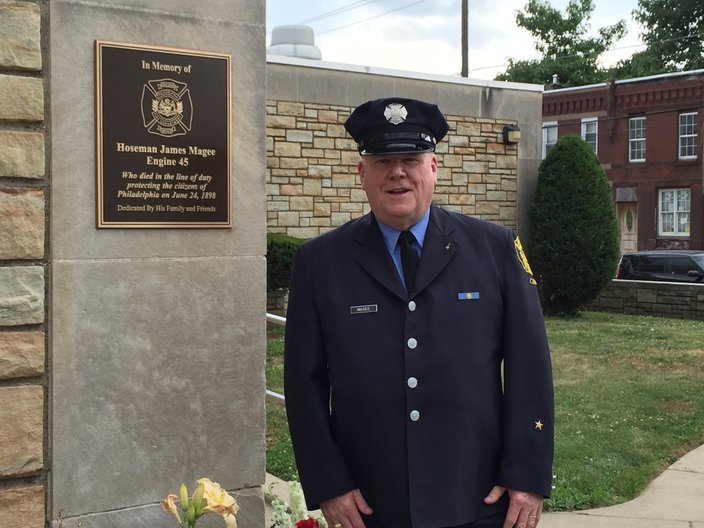 Retired firefighter Harry Magee, great-grandson of fallen firefighter James Magee, stands at the site of the new memorial dedicated to his great grandfather.

The plaque placed at the intersection of Second and Venango streets was stolen in March.

James Magee had been a horseman for Engine 45 and died on June 24, 1898, when a wall collapsed on him while fighting a fire at the Thomas Potter Oil Cloth Company. The blaze reportedly took two days to extinguish and injured 12 firefighters, though the 35-year-old Magee was its only fatality.

Capt. Andry Metellus, of Engine 45, said that he was disappointed when the plaque was stolen three months ago.

"This was such a lack of respect from the public," said Metellus, not hiding his disdain for whoever stole the original memorial. "Taking a plaque like that, that's just a sign of disrespect."

According to Harry Magee, the replacement plaque cost about $1,400 and was paid for by, Life Celebration by Givnish, a funeral home in North Wales.

Magee said his great-grandmother served for 39-and-a-half years, exactly as long as he served as a member of the fire department.

Also, now that his grandfather's plaque is at a new location, Magee said he feels it will teach and inspire firefighters at Engine 45 about the heroic acts of those who have come before them.

"It's right here on the side of the station," Magee said. "It's good to be here. It's good it will be at home."

Magee, who formerly served as curator of Philadelphia's Fireman's Hall Museum, 147 N. Second St. in Old City, said he's currently working with others in the fire department to move other memorial plaques throughout the city from their current sites to locations at firehouses.

He said in this way, firehouses throughout the city will have memorial plaques to teach and inspire new generations of firefighters.  Also, the locations will help protect further plaques from being tampered with.

Magee said he hopes to start this project sometime in the fall.