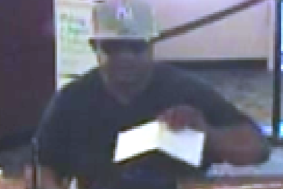 Philadelphia Police and the FBI are looking to identify this man, who allegedly robbed a Citizens Bank in Northeast Philly on Friday.

Philadelphia police and the FBI are looking to identify and locate a man suspected of robbing a bank Friday in Northeast Philadelphia.

The man entered the Citizens Bank branch at 7248 Rising Sun Ave. in Burholme around 9:47 a.m., the FBI said. He handed the teller a demand note and fled after receiving an undisclosed amount of cash.

The suspect, a mustachioed black male in his 30s, is about 5'6" and 200 pounds, the FBI said. He was wearing a dark blue V-neck T-shirt, gray cargo shorts, white sneakers, black sunglasses and a gray New York Yankees cap at the time of the robbery.

The FBI said the man is also a suspect in an Aug. 10 robbery at the PNC Bank branch at 1316 Bethlehem Pike in Flourtown, Montgomery County. During that robbery, the suspect wore a white T-shirt and a black Chicago Bulls cap.

The FBI says the suspect is considered armed and dangerous.

Anyone with information about either robbery or suspect is asked to call the FBI at 215-418-4000 or Philadelphia Police Department at 215-686-8477. Tipsters can remain anonymous.