In this photo made on Wednesday, July 27, 2011, a Pennsylvania worker stands on top of a storage bin as the dust of the powder used to make a mixture with water used in the hydraulic fracturing process billows above.

Read More
The politics of economic development and sustainability tend to create a catch-22 in terms of directing advocacy efforts and defining which practices are most likely to achieve goals. In the United States, few issues illustrate this effect more starkly than perceptions of oil and gas production.
A Gallup poll released on Friday revealed that overall, an even 40% of Americans support fracking and 40% percent oppose it. When broken down into categories of political identification, age, and support for the "environmental movement," the poll shows that Republicans are solidly in support of fracking while older Americans favor it more than young Americans. 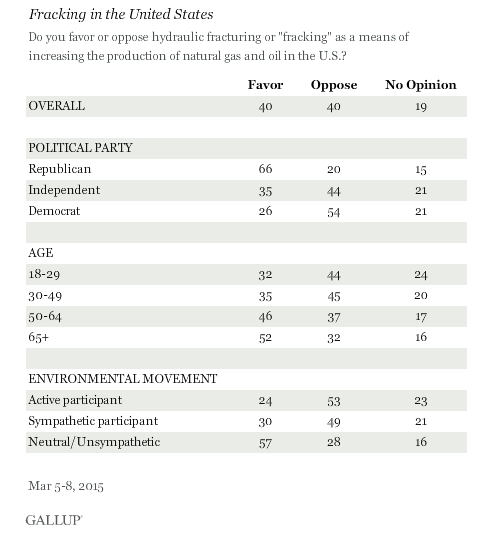 Fracking, or hydraulic fracturing, is considered an unconventional method of extracting oil and natural gas from underground shale rock formations. With over 63,000 shale gas and shale oil wells in the United States as of 2012, however, the term unconventional can be a misleading representation of the prevalence of fracking in the United States, pictured below using 2012 data from Di Desktop.

The Gallup poll comes at a particularly sensitive time, as changes in the industry outlook and U.S. regulatory system have pushed the controversial issue further to a head.
Despite U.S. crude production hitting a record 9.4 million barrels per day earlier this month, OPEC forecasts that U.S. production from fracking could sharply decline in 2015 as the effect of lower oil prices makes new drilling more of a break-even investment.
While the basic environmental and public health arguments against fracking pertain to potential water contamination, air pollution and increased seismic activity, the flip side of the argument has been that the fracking boom helped lift the U.S. out of its recession and increased national energy independence.

Divisiveness over fracking hits particularly close to home, with Pennsylvania sitting above the Marcellus Shale, the largest source of natural gas in the country.

While Governor Wolf has proposed a 5 percent severance tax on the natural gas extraction industry and reinstated a moratorium on new leases for oil and gas development on state forest and park land, Pennsylvania has undoubtedly been among the biggest beneficiaries of the shale boom.

In contrast, in December, New York Governor Andrew Cuomo banned fracking in the state, providing a snapshot of how views toward fracking may shift considerably from state to state.

A StateImpact poll from last September showed that Pennsylvania and New York residents had notably differing stances on fracking. Fifty-four percent of Pennsylvanians supported the "development of shale gas" compared to 29 percent of New Yorkers.

Some New Yorkers in the state's southern tier are livid over Cuomo's ban, however, going so far as to raise talk of secession to Pennsylvania.

As the Gallup poll suggests, an even split among Americans over fracking shows that the balance of pros and cons has thus far not been overwhelmingly clear. The possibility that fracking operations will lose profitability in the near-term could dim the boom enthusiasm and reveal what some have considered a bubble waiting to burst.
What does seem clear is that the controversy, now several years into the industry's expansion, stems from legitimate values and concerns tied to more fundamental issues still facing the American populace.