The proposals are in and the videos are being scrutinized as Amazon rakes through no less than 238 submissions from regions across the U.S. hoping to become Amazon’s second home.

Though Philadelphia Mayor Jim Kenney was quite confident when unveiling the proposal last week, Paddy Power, an Irish bookmaker that covers everything from sports to politics, doesn’t have quite as much faith in Philadelphia luring Amazon – but it’s getting there.

The site is most confident in Atlanta, which has odds listed at 2-to-1. Though previous reports showed Philadelphia falling at 20-to-1 odds, an updated chart now has Philly at 7-to-1 odds for nabbing the $5 billion headquarters, edging above that other Pennsylvania city, Pittsburgh, which is at 14-to-1 odds. 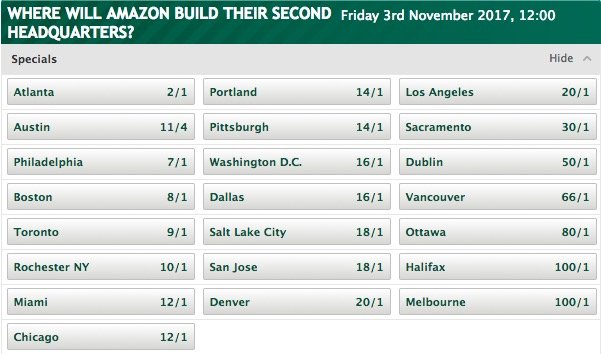 As the betting chart stands now, Philly’s biggest competition besides Atlanta would be Austin, Texas. Falling right behind Philly is Boston, with 8-to-1 odds. Toronto, with 9-to-1 odds, rounds out the top 5.

According to Fortune, Atlanta has been an early favorite for many analysts who say the city meets many of tenets outlined in Amazon’s request.

But remember... Paddy Power was famously wrong (like many others at the time) about the outcome of the 2016 U.S. presidential election.