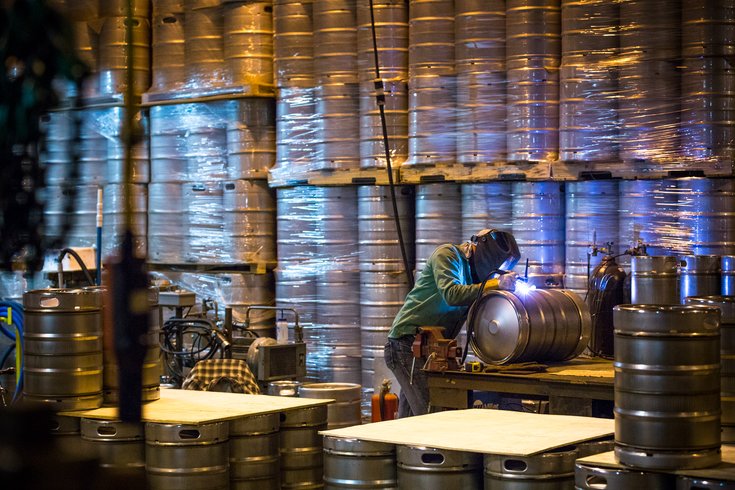 American Keg production manager Kellby Ochs repairs a weld made by one of the robotic welders at the Pottstown, Montgomery County factory.

American craft beer making – and drinking – is all about local.

So when you grow 64,000 pounds of barley on your own land, in northernmost Bucks County, on what had been a fallow farm, repurposing a goat barn which stood idle for two decades into a brewery, you’re kinda picky about how you barrel your inaugural brews.

GALLERY: Where 'American Kegs' come from.

When Ferguson's Great Barn Brewery in Kintnersville begins selling its American Pale ale and Kölsch within the next two weeks, the beer will be shipped in new stainless steel kegs manufactured by American Keg, the only U.S. company making metal kegs. 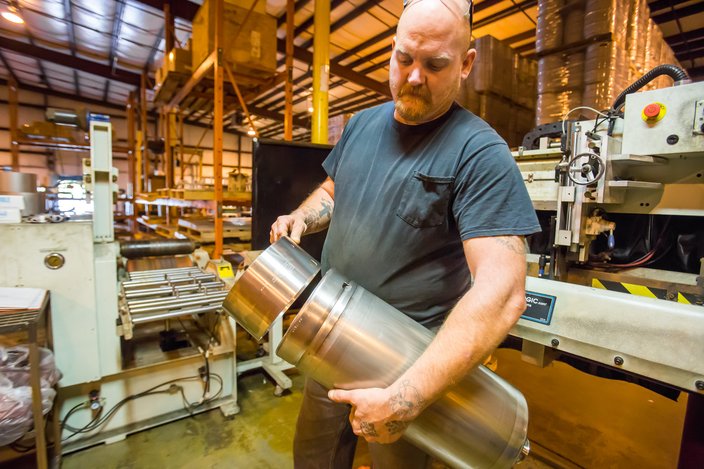 Keith 'Grizz' Gabel shows the chime – the top and bottom ring on the keg – before and after it is formed and attached to the body.

There are about 4,000 craft brewers in the country, and more coming online every week. Many of those local beers are barreled in kegs made overseas, primarily in Germany and China.

But for Ferguson, imported kegs were never an option, even though they can be had cheaper.

“We’re trying to promote quality. And also U.S.-made," he said of the need for a keg made in America. "That’s better for us and our country. It’s worth the extra cost.

American Keg is “22 miles away. We’re trying to promote local. It was natural for us to go with them,” said Ferguson.

In fact, Ferguson went all in. He had his brewery’s logo applied to each keg at an added cost, even though kegs are typically unseen by consumers.

“It means a lot to us. We have pride in our product,” he explained.

That’s a feeling shared by the 25 employees of American Keg, a relative newcomer that began as Geemacher and was renamed when sold last spring to Scott Bentley.

On top of the initial $4 million investment under a previous owner, Bentley put in another $1.5 million, added employees and started a second shift, explained Steve Rubeo, the company’s controller under both owners.

Now the manufacturer is at capacity and looking for additional space, said CEO Paul Czachor. 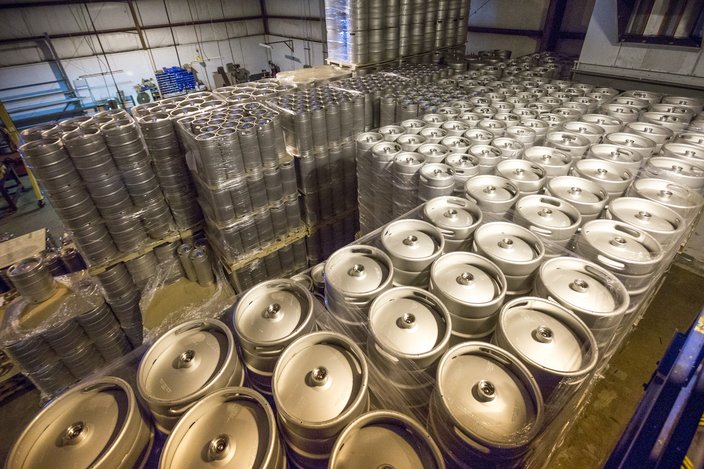 Hundreds of finished kegs are ready to be shipped from the Pottstown, Montgomery factory.

The company has even had talks with Yuengling of Pottsville, the oldest brewery in America and considered the largest craft beer maker in the country at just under 6 million barrels, said Brian Luzzi, director of sales and marketing. But American Keg does not yet have the capacity to make kegs for Yuengling and still maintain their current customers.

In fact, Yuengling favors a barrel size that American Keg doesn’t even make at the moment, added Luzzi. But they’d like to get there since Yuengling prefers to buy American.

Which is good news for American Keg employees such as Grizz.

At 6 feet and 6 inches, his muscular forearms heavily inked, it’s easy to see how Keith Gabel earned his nickname.

Now a lead supervisor who maintains the manufacturing machines and keeps production moving, the 35-year-old Gabel was an out-of-work cook when hired three years ago. 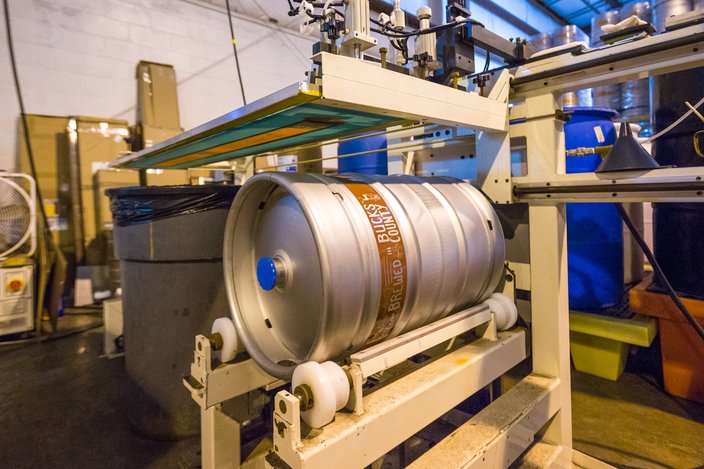 Luzzi said that for assembling a relatively simple container – just six pieces welded together – “it is surprising hard to make it well.”

Because they are small and still relatively new, lots of work at American Keg is done by hand, work that would be more automated in a more-established keg-making business.

The last previous keg maker in America stopped production in 2005.

There’s no playbook, no off-the-shelf machinery designed to make the half kegs, which hold 15.5 gallons, and quarter kegs – sixtels in the trade – which hold just over five gallons, he explained.

That meant adapting machines and machining parts, which took time and lots of trial-and-error attempts to get right, Luzzi said.

“Consistency is the goal,” he added. “We know everything from start to finish about this product.”

And while it is a low margin business, American Keg’s success is based on three things, according to Luzzi: quality of the product, proximity to brewers in the Mid-Atlantic to decrease transportation costs, and the sentiment of supporting American manufacturing and American workers.

Czachor said most of the employees are enthusiastic about their jobs because they are craft beer fans themselves.

“We’re all very proud of what we do. We have American workers, American brewers and brewpubs, an American product, bringing American jobs back,” he said.

And how appropriate that American Keg makes the vessels in Pottstown, a city that produced quality steel used in the construction of the Panama Canal and the Golden Gate Bridge.

Evan Fritz, the head brewer at Manayunk Brewing Company, said the cost difference doesn’t matter to him so much as the quality. “I know the difference,” he said. And he likes buying local.

“That’s the biggest reason. We save money by not paying shipping and customs,” on imported kegs. “And I can save time. I can drive there. I’ve met these guys, I know them, we’ve had beers together,” he said. 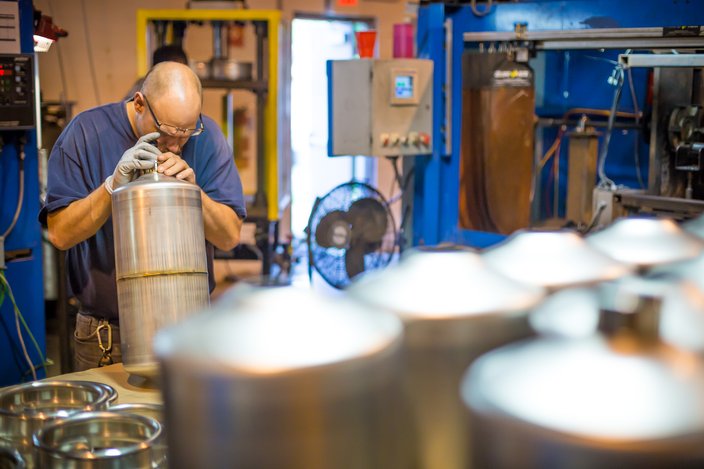 Once the two body pieces are welded together, the weld is inspected from the inside.

Brian O’Reilly, the brewmaster for Sly Fox in Pottstown, said he buys his kegs from around the corner for their quality and value.

"American Kegs delivers both for us," he said. "“I also think that it is important to have someone making kegs in America."

"There was a shortage of kegs in the market 14 years ago and we would often have to wait 6 months to get new kegs into the brewery," he added. "Foreign currencies can move up and down against the dollar, so not having a U.S .supplier could be a real disadvantage.”