Power of the pillowcase: How one local org is sewing for smiles and PTSD awareness 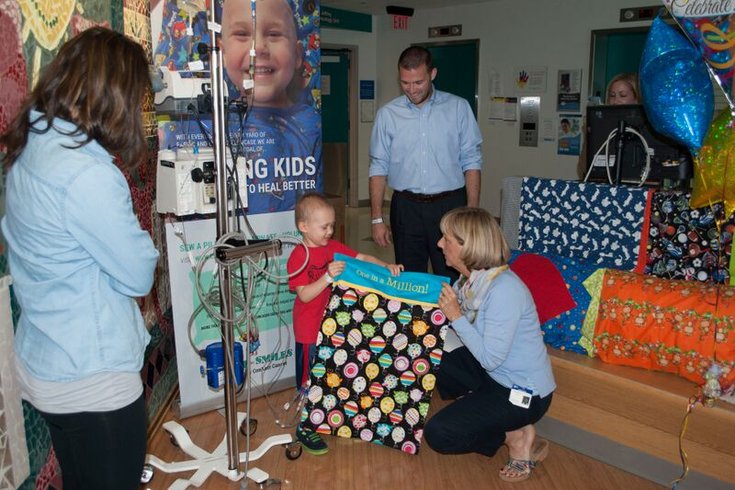 Cindy Kerr, Cases for Smiles founder and CEO, presents 4-year-old patient Max with ceremonial one-millionth pillowcase at CHOP on Sept. 17. His parents watch in the background.

When Cindy Kerr handed over her organization's millionth pillowcase for sick children at CHOP on Sept. 17, by her side was the first pillowcase she'd ever sewn, adorned with hamburgers and made for her son, Ryan, who passed away from bone cancer in February 2008.

"It wasn’t until I got home that it really hit me," Kerr told PhillyVoice of handing out the pillowcase last week. "Right there, was the first pillowcase delivered to CHOP, and there was that millionth. And you know, it brought back all these memories of Ryan, who we think about every day. But I think that’s when I fell apart."

The 58-year-old Wayne, Delaware County, resident has come a long way. When she learned in 2005 Ryan’s cancer had returned, her coping instinct was to sew. After her son's surgery one night, she arrived with 30 pillowcases for other patients in the CHOP oncology ward. Following Ryan’s death, she started the nonprofit Cases for Smiles (then "Conkerr Cancer").

The power of those pillowcases? Their ability to distract kids from diseases that tend to overwhelm their lives.

"It's about distraction, but also choice," Kerr said, explaining that she and volunteers sometimes sew with kids at the hospital. "They get to pick out what they want to sew in a world where they don’t have a lot of choice. And as a parent, it’s really cool to see your child smile; many times, parents will say it’s the first time they’ve seen their child smile since they got there.

Since first launching in Philadelphia, the organization has opened 120 volunteer-based chapters that deliver hand-sewn pillowcases to children in 330 hospitals across the U.S. and Canada. 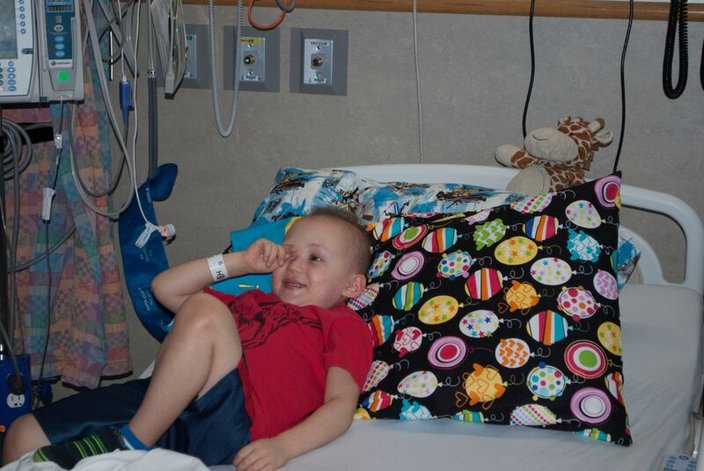 But now that Kerr has been able to get the pillowcases delivered on such a large scale, she hopes to advocate for what's less talked about with childhood cancer: stress disorders.

Research from 2002 indicates 80 percent of children and parents associated with the serious injury of a child experience at least one incidence of acute stress disorder, identified as a short-term form of distress that stretches as far as four weeks after an incident. A separate study, from 2003, indicates that one in five children will experience PTSD four months after an injury. A report from the Journal of Pediatric Psychology determined that families of teen cancer survivors were more likely to experience PTSD one year after treatment than the actual patient.

“One of the most striking things from research is that it really affects parents as much as kids," Nancy Kassam-Adams, director of the Center for Pediatric Traumatic Stress at CHOP, told PhillyVoice. "It’s terrifying to have your kid injured or in the hospital and have some threat to their life.”

It's a problem Kassam-Adams is trying to get on the radar through education efforts, aimed at both health care professionals and parents. Many, Kassam-Adams added, don't even know PTSD can affect them or their child.

"One misconception is that PTSD symptoms are about people who’ve been to war," she said. "It doesn’t mean every injured kid will get PTSD. But it’s pretty natural if, during some parts of the experience, it feels terrifying.”

To address the issue, Cases for Smiles recently partnered with CHOP to more seamlessly disseminate information to parents who may not be aware of PTSD -- sometimes referred to as pediatric medical traumatic stress -- or the resources available to them. They now tuck cards into every pillowcase handed out at CHOP that provide information on where to turn for help and point to a "Caregivers' Guide." 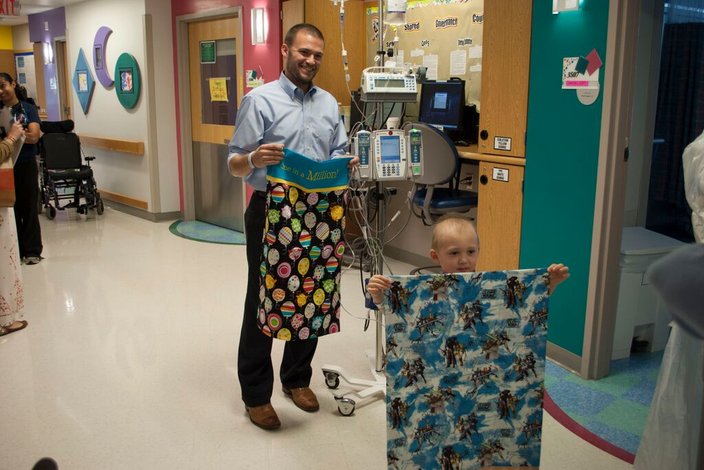 Max and his father show off two pillowcases while in the CHOP oncology ward. Cases for Smiles distributes 200,000 cases per year. (Handout Art / CHOP)

"It's important to get materials in the hands of parents when they need them," Kassam-Adams emphasized. "As a parent, you can be incredibly stressed out, and it's hard to look for resources on your own. ... When you don’t get the right kind of support, often times, these things can get worse."

Common symptoms of distress include avoiding discussion of the disease or injury, re-experiencing traumatic moments, and loss of appetite and sleep.

Kristy Cassano is the mother of 4-year-old Max, the leukemia patient who received the millionth pillow. She told PhillyVoice she and her husband have been conscious of the mental toll their son's leukemia can take, and have taken active steps toward not only easing the stress on him but on themselves as well.  The pillows from Cases for Smiles are among ways to ensure Max has something to which he can look forward. A smile on his face, by extension, eases his parents’ stress.

For Cassano, the magic of a pillowcase is its role as part of a larger effort to make cancer as normal a part of life as possible, in her words. A fan of superheroes, Max calls himself "Iron Max," and approaches his battle with leukemia as a fight against "Sneaky Lou." The lightened language, his mother said, is one way to ward off encroaching stress.

"It’s odd to say it, but it’s kind of been a fun ride," she explained to PhillyVoice. "As a family, you learn what’s important and prioritize life a little differently. You get closer than you could ever imagine, having to go through something that’s not expected at all, and tragic in the sense of a disease process that can really take over your lives ...

“You either fall apart from this, or you grow stronger. I think we’re on the other end of that, and it's a nice feeling to have."

For now, Kassam-Adams hopes to educate more parents to be as proactive as Cassano and her husband. She's also working on research that dissects how parents and children communicate with one another after an injury or illness.

Kerr, meanwhile, is raising funds -- the pillowcases have gotten a lot more expensive -- and still finding ways to make her son proud.

"Ryan was always very adamant that I did not give up on anything and did not stop our lives, and that we kept going," she stated.

"For me, that’s the driving force. Because I don’t want to let him down."