Brian Mineweaser, 49, of Honey Brook, said he will use the money to pay for his children's college education 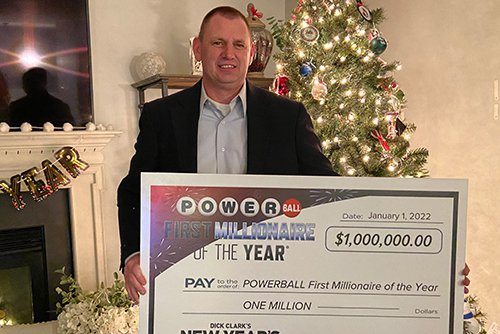 Brian Mineweaser, 49, of Honey Brook, Chester County was named the 'Powerball First Millionaire of the Year' on ABC just moments after the ball dropped in Times Square to ring in 2022.

One Chester County man and his family couldn't be off to a better start in 2022.

MORE: Philly schools will have students back in classrooms after winter break as omicron variant spreads

Mineweaser's No. 4 ball was randomly drawn from a pool of five finalists vying for the $1 million check. The news left Minewaser and his wife Dorothy stunned.

"Wait, us?" a shocked Dorothy said to her husband upon hearing they had been selected.

Mineweaser said he will use the prize money to pay for his children's college education.

"My heart's pounding right now, Ryan," Mineweaser told Seacrest. "This is unbelievable. To have this for my family is amazing. I don't think I'm gonna sleep for a while right now."

The moment we've all been waiting for. Brian from Pennsylvania just won $1 MILLION! Congrats to the new Powerball First Millionaire of the Year! #PowerballRockinEve pic.twitter.com/QLd6f6IVAA

The Mineweasers celebrated the new year from their Honey Brook home, where they were awarded a New Year's Eve party as part of the Powerball sweepstakes. The prize package included a $10,000 check, a new 70-inch television and karaoke system, food and drinks for eight people and party decorations.

Mineweaser earned his chance at $1 million by winning $2,022 in a special Pennsylvania Lottery Online Prize Drawing held in September.

"The Pennsylvania Lottery congratulates Brian on his $1 million Powerball prize," Pennsylvania Lottery Executive Director Drew Svitko said. "It was exciting to watch the winning moment live on television. We remind our players that it only takes one ticket to win a life-changing prize and playing the lottery in Pennsylvania helps the older residents of our commonwealth."

The third annual Powerball First Millionaire of the Year event drew from 29 lottery jurisdictions to determine a pool of semifinalists. Five finalists were randomly selected. Along with Mineweaser, the other four finalists came from Illinois, Louisiana and a pair from Iowa.

Last year, Sara Bosh of Beaver County, Pennsylvania, was one of five finalists for the $1 million prize.