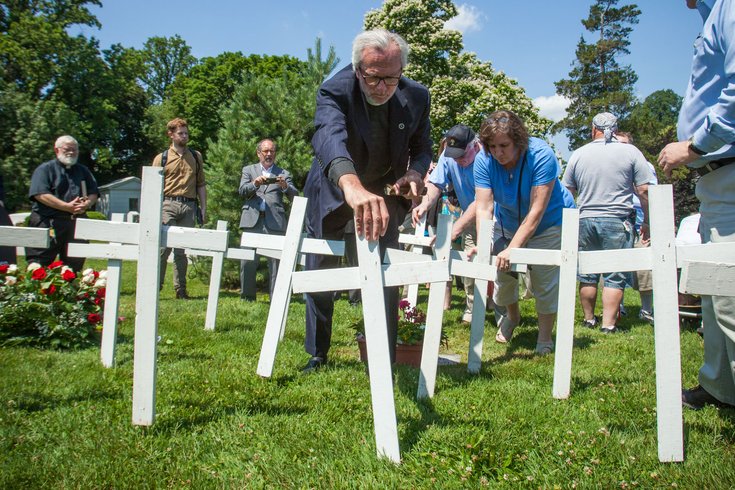 Wooden crosses were placed near the location where the remains of 47 fetuses from Kermit Gosnell’s abortion clinic were laid to rest.

Nearly three dozen anti-abortion and religious figures assembled at Laurel Hill Cemetery on Wednesday to speak out against legal abortions and memorialize the spot where the remains of 47 fetuses from Kermit Gosnell’s abortion clinic were buried.

“We know every innocent human life deserves to be protected,” said speaker Catherine Glenn Foster, a lawyer aligned with the anti-abortion cause. “We all saw the unspeakable conditions and practices of Kermit Gosnell’s clinic.

“Like with any pregnancy loss, memorials help women… grieve, heal and move forward," she said of the burial site.

Gosnell was convicted of murder in 2013 and given a life sentence for killing babies who survived botched abortions at his now-shuttered clinic. Anti-abortion leaders in the city have used his clinic as an example of the evils of abortion. His actions were condemned by both pro-life and pro-choice groups.

One speaker, pointing to data that showed black women have a higher rate of abortions than other groups, said that more needed to be done to stem abortions in the African-American community.

“Black lives matter,” said the Rev. Bill Devlin, pastor of New York City's Infinity Bible Church, using the slogan often associated with the protests against police misconduct that have sprouted up in cities all over the country. “Our call today is to the African-American church here in Philadelphia.”

Devlin, a Westminster Theological Seminary graduate who lives in Philadelphia when he is not ministering in Brooklyn, said he was disappointed that local pastors did not do more to combat abortion.

“Stand up for the lives of the unborn because black lives do matter,” Devlin said.

The gathering, organized by the Pro-Life Coalition of Philadelphia, opened with a press conference near the entrance to the East Falls cemetery where a series of speakers, including a number of religious figures, denounced abortion. After the speakers finished, the group of a few dozen made the five-minute walk through the cemetery to the site where they said the fetuses were buried.

The grave was unmarked but protesters said there would be something placed there by the time Pope Francis visited Philadelphia in late September. One man knelt down to place roses on the vacant spot of grass. Many also held white, three-foot-tall Christian crosses, which they stuck into the ground around the roses before gathering to hear more speeches and prayer.

“Let us exalt His name together,” said the Rev. Patrick J. Mahoney of the Church on the Hill, a nondenominational Christian organization in Washington D.C. “And [pray] that abortion will end up in the scrap heap of history.”

Demonstrators said they were pleased the city decided to bury the remains of the fetuses but they were unhappy with how it was handled.

The group wanted the city to hand over the unclaimed fetuses so they could be buried and memorialized. The city cremated them in 2013, instead, without a public announcement, and buried the remains.

“Our regular procedure is that remains that are unclaimed by families are cremated by the city,” said Jeff Moran, a spokesman with the city’s Public Health Department. “Cremated remains that stay unclaimed are eventually buried at Laurel Hill. We don’t issue public announcements when any city cremations or burials take place.”

That was not sufficient for some of the speakers.

“These children were not unclaimed, we came for months after months seeking these children in love,” said Mahoney. “It is deeply troubling.”