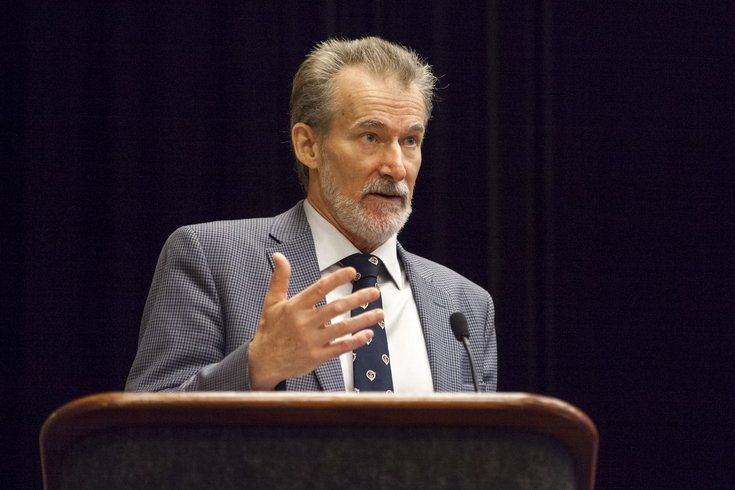 Dr. Douglas Farrow spoke on "Redifining Marriage: Is it really whatever we say it is?"

A Canadian professor broached the topic of marriage Friday at the World Meeting of Families, asking a crowd of more than 200 pilgrims whether marriage can be defined however society pleases.

Dr. Douglas Farrow, a professor of Christian thought at McGill University in Montreal, said the historic definition of marriage is predicated on the purpose of procreation, exclusive faithfulness between a man and a woman, and permanent bonding.

He argued the new definition simplifies marriage as a close relationship between any two adults – featuring various forms of sexual intimacy and some degree of exclusivity – recognized and supported by the state.

"It's driving a wedge between civil and religious marriage," Farrow said. "An impermanent, an unfruitful bond cannot be rendered sacramental. It can't be an image or an avenue of the grace of Christ with the church."

His remarks drew considerable applause from many who attended his seminar, but it also drew stern rebukes from a crowd of LGBT Catholics who listened at the breakout session on "Redefining marriage: Is it really whatever we say it is."

"I really believe that it was a hate speech," said Nicole Santamaria, one of about 25 members of All Blessed Families, an LGBT group. "It is a terrible message that you are not family to us – and we are Catholics."

All Blessed Families is trying to create bridges among Catholics, Santamaria said, encouraging them to "open their hearts and minds," as Jesus taught. An El Salvador resident, Santamaria said Farrow's message, which included a call to fight against changing moral norms, disheartened her.

"I am pretty sad for this particular speech and this particular experience," Santamaria said. "We have a journey to walk together. ... These kinds of speeches — that means killings in my country."

Farrow said resisting the redefinition of marriage should not mean Catholics fight homosexuals or people sympathetic to the LGBT community. Rather, Catholics must reveal to society its "misguided way of thinking about marriage and family and the body itself."

Farrow said the historic definition of marriage does not provide an opportunity for discrimination because it already was universal. The only way discrimination can occur, he said, is if the definition is changed.

"Some have homosexual leanings," Farrow said. "They, like everyone, have the right to marry. But they don't wish to (do so) using the definition as we always have had it. ... They demand that the state extend marriage by opening it to same-sex couples.

"Discrimination can only occur if we say, without good reason, that this man cannot marry this woman — because he's black and she's white — or if we change the definition of marriage."

One woman, a married lesbian with two adopted daughters, was among a handful of people who questioned or rebuked Farrow's assertions during the question-and-answer session that followed his message.

"Using those kinds of scare tactics divides families," the woman said. "It divides our churches. It divides our society. It is a very unjust, unChristian way to go. I don't hear any love, or attempt to create community, in your kind of talk."

Others questioned how they could reconcile the fact that many of their homosexual friends are more loving than some Catholics or how to tangibly resist the changing definition of marriage.

Jacques Cauchy, of France, said he appreciated the openness of the discussion.

"It is not that easy to have that open of a discussion, even among Christians," Cauchy said afterward. "He, at least, tries to listen to the others. It is an important event, that we are all together recognizing that Christ is here."

Patricia Kerwin, of Pottstown, Montgomery County, and a member of St. Thomas More Parish, called Farrow's seminar wonderful, saying she appreciated that he based his message on what happened in his native Canada, which legalized same-sex marriage a decade ago. But she left with an unanswered question.

"My question is, what's going to happen to the church and the community when the pastor says 'No, I can't marry you because you're of the same sex?'" Kerwin said. "Is the church going to lose its nonprofit status?

"The logic of same-sex marriage, because it abandons procreation as a defining feature, compels the state to replace the concept of natural kinship with a concept of legal kinship," Farrow said.

That argument also drew some criticism. One woman, with an adopted son, told Farrow he made her son sound like a "second-class citizen."

Farrow clarified his remarks, saying marriage functions as the ideal way to raise children under their natural parents.

"To maintain the standard that a child deserves to be raised by its own mother and father, all other things being considered, is fundamental," Farrow said. "That's what marriage is about."