Prospect Danick Martel may be small, but he could provide big boost to Flyers offense 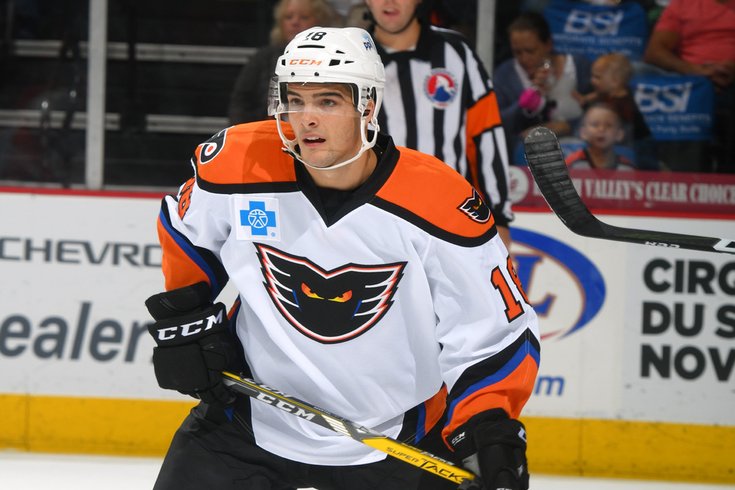 The looks were invariably the same. The quick-twitch eye dart would start up at Danick Martel’s head and work their way down to his skates, and then back up again. Nothing was ever uttered. No one ever had the guts to blurt it right out to him, though Martel knew what they were thinking with their judgmental head-to-toe gaze.

He knew what they were asking themselves – How is this runt scoring all of these goals?

"It still happens," Martel says, laughing. "I love proving people wrong. It’s why I went undrafted. It’s why I have a f*** you attitude! That started when I was younger. Not a lot of people trusted in the way I play and my size. I’m going to score anyway. That’s the way I think. It’s the way I play. I’m not small. I play big. You want to make a mistake. Judge me by my size."

So we’ll let his numbers do his talking: In 16 games this season, the stubby 5-foot-8, 180-pound Martel leads the Lehigh Valley Phantoms, the Flyers’ American Hockey League affiliate, with 14 goals and 5 assists. The 22-year-old left winger from Drummondville, Quebec, is second in scoring in the AHL with 19 points, behind Hershey’s Chris Bourque (23 points), the son of Hall of Famer Ray Bourque.

The Flyers right now are in the throes of a terrible scoring slump. The only line producing anything is the top line of Jakub Voracek, Sean Couturier and Claude Giroux.

Maybe Martel could provide a little boost in that area.

Martel, who jokes that’s he’s a slump right now after not scoring in the Phantoms’ last two games, is willing to be patient. All he asks for is an opportunity. He’s certainly proven he could score when he’s been given the chance. He was fifth on the Phantoms in scoring last year, ending the season with 40 points (20 goals, 20 assists) in 68 games. In his rookie season in the AHL (2015-16), he was tied for fourth in scoring for the Phantoms with 22 goals and 15 assists (37 points) in 67 games.

Of his 20 goals last year, 15 came below the circle near the crease.

Essentially, Martel is a Danny Briere avatar, a small, pesky, high-energy player who has a knack for finding openings in traffic around the net. Martel will be the first to admit most of his goals won’t fall under the aesthetically pleasing category. But the puck has a way of finding the net after it leaves his stick.

The Phantoms’ 6-1 loss to Hershey on Nov. 11 snapped Martel’s six-game goal-scoring streak. Just a little over two minutes into the season Martel scored his first goal. From there, he had a feeling some specials things could be ahead. He loves being the muck in front of the net. He loves getting into the head of opponents.

That aspect of his game is more like Kenny "The Rat" Linseman.

I’m not that guy to listen to anyone bitching about my size. I love pissing off the bigger players because they automatically assume that they’re better than me. It’s why I will never stop working.

"I was always able to score, but my goals aren’t always the prettiest ones," admits Martel, who started staking at two just after learning how to walk. "People think that I’m a skill guy, and I can be, but I’m more a hard worker and a grinder. A lot of my goals come off of tip-ins, or when my ass in the crease. I’ll get the garbage goal, but I learned that a goal is a goal.

"It doesn’t matter how you score, as long as you score. I remember the first game of the year scoring two minutes in. My first goal I was in the crease and I just got it past the goalie into the net. It was kind of a greasy goal. If I’m not in the crease, I wouldn’t have scored the goal. The goals may be lucky goals — but they’re goals. They count. I’m the kind of guy who likes bringing things to the net. I’ll put my face in the net. I don’t care."

Martel’s size does belie his style. He’s aggressive, an agitator to defensemen around the crease and he doesn’t mind taking nor giving hits.

"I’ve been in two fights in 16 games this year, but I’ll do whatever I can to help my team win at the end of the day," Martel said. "I don’t really have a timetable to get up with the Flyers. I’m undrafted and I try to play every game like it’s my last game. You can say that I do play with a chip on my shoulder because I’ve been doubted.

"I can’t think too far ahead, because the NHL level is a different game. Right now, my focus is becoming a better hockey player and let the Flyers determine when I’m ready to come up. I need to work on the defensive zone if I’m going to play in the NHL."

In the meantime, they’ll keep looking down on Martel and he will keep playing big.

"The way I see it is people have been saying that I’m too small (to play professional hockey) my whole life," Martel said. "Small people have always made it in hockey. Martin St. Louis proved small guys can play in the NHL, and he played for a lot of years. Why can’t I be that guy? To be that guy, you have to work harder than the others. If you’re not ready to do that, people will say he’s too small, he couldn’t make it.

"I’m not that guy to listen to anyone bitching about my size. I love pissing off the bigger players because they automatically assume that they’re better than me. It’s why I will never stop working."