Putting the hot back into Philly’s hotel scene 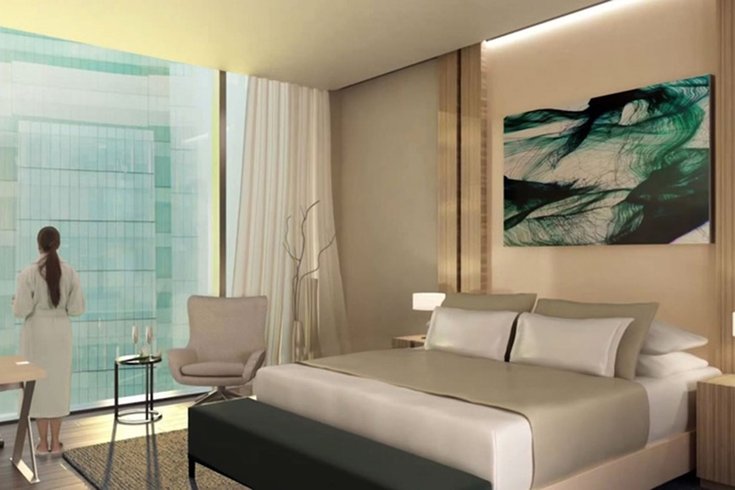 The Four Seasons Philadelphia Hotel will move into the top floors of the new Comcast tower.

Another funky Kimpton. An uber-luxe SLS. Even, at last, a W — the Starbucks of the boutique world.

All of a sudden, the world’s hottest hostelries want a piece of Philly’s hitherto blah hotel scene.

“The fact that they are choosing us shows how far we’ve come along,” said Ed Grose, executive director of the Greater Philadelphia Hotel Association. “We’ve made it as city worthy of the world stage.”

According to research from PFK Consulting, Philly’s hotel occupancy rate last year reached 76 percent, the highest in, wait for it, 65 years. It’s natural, then, that hipper and/or more luxurious names are finally interested in the city.

Further, a growing population of valued millennials and empty nesters ensures a steady stream of residents who remain on the lookout for cool new spots to troll, observes Grose.

The “rooftop bar at Old City’s Hotel Monaco is very popular at night with locals,” he said.

Pope Francis' visit here in the fall and the possibility of the Democratic National Convention being staged here in 2016, not to mention Philly’s recent designation by The New York Times as the top American city to visit in 2015, means things can only get hotter.

Most exciting is the entry of the relatively rare SLS, at Spruce and Broad streets (rendering at left). So far, there’s only three branded hotels in the world, with a few more scheduled to beat the 2016 Philly opening. Designed by Kohn Pedersen Fox, the 47-story building continues the colonization of South Broad by Dranoff Properties and will offer 150 guest rooms, along with 90 condos.

“Philadelphia has captured the attention of a global audience of business and leisure travelers, and working with Carl Dranoff gives us an opportunity to partner with one of the industry’s foremost developers,” said Arash Azarbarzin, president of sbe Hotel Group.  “We’re looking forward to sharing our approach to hospitality with a community as culturally vibrant and dynamic as Philadelphia’s.”

A third Kimpton will likely open in the former Family Court Building at 18th and Vine, developed by P&A Associates. According to a Kimpton spokesperson, the deal isn’t 100 percent official — but once the project receives a green light, it promises to be yet another signature transformation of a local landmark by the brand.

The arrival of a W in 2018 at 15th and Chestnut will seem anti-climatic, coming more than 15 years and some 60 hotels after Starwood first launched the brand. Developed by Brook Lenfest’s Chestlen, the project also includes an Element, Starwood’s extended stay option. Together, they’ll add 755 rooms to the city’s stock. Designed by Philly-based Cope Linder Architects, the building is seeking LEED-certification and will include an 8,600 square foot restaurant, and a 185-space, below-grade parking garage. (Rendering below.)

Increasingly, area developers — like Dranoff — are incorporating hotel projects into their mixed-use plans. PMC Property Group, for example, intends to condense the design trade aspect of the Marketplace Design Center at 24th and Market and to add floors holding retail, offices, apartments and, ultimately, a 150-key hotel.

And, the recently awarded casino license near the South Philly stadia includes a hotel component, as does developer Bart Blatstein’s just-announced plan to renovate a power plant on the Delaware River.

Liberty Property Trust’s new $1.2 billion, Norman Foster-designed Comcast tower, opening in 2018, will give over its top floors to a relocated and no doubt super-luxury Four Seasons Hotel.

Before it opens, the current Four Seasons will close in June. It will be renovated to open an as yet unnamed property under the management of Denver-based Sage Hospitality, which operates chains like Marriotts and Westins, as well as independent hotels. 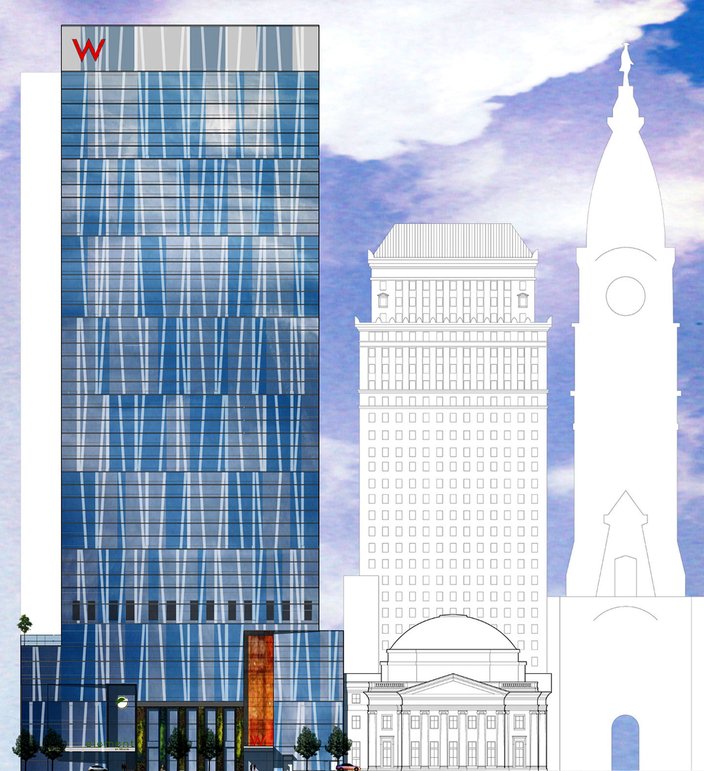 Meanwhile, a host of boutique properties are in the pipeline. They include:

— the 212-room Study at University City on land leased from Drexel, to be designed by Philly’s DIGSAU;

— an as yet unnamed concept involving the merger of a suite of beat-up buildings at 5th and Bainbridge in Queen Village; and

— the $125 million Hudson Hotel from the New York-based originator of the boutique hotel concept (Morgans Hotel Group), on the site of Little Pete’s diner at 17th and Chancellor streets. Design is by the local firm DAS Architects.

“Until there are shovels in the ground, I won’t consider any of these a done deal,” cautions Grose. By that criteria, only the Four Seasons atop the new Comcast tower is a certainty.