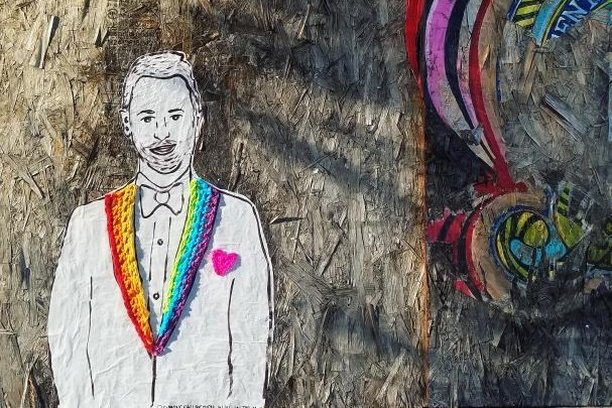 Two Philly artists, Nicole Nikolich and Symone Salib, created a "Queer Eye" scavenger hunt because the cast members of the Netflix show are in Philly shooting their fifth season.

In honor of Pride and "Queer Eye" visiting Philly, two local installation artists have set up a scavenger hunt across the city.

If you didn't know (how could you not?), the cast of the Netflix series is about to be in Philly to shoot the show's fifth season, which will premiere sometime in 2020.

The installations are wheat paste and yarnbomb collabs of "Queer Eye" cast members Bobby Berk, Antoni Porowski, Jonathan Van Ness, Karamo Brown, and Tan France. And on Instagram, Salib and Nikolich are giving clues for fans to find all five of the installations, which will be revealed by the end of day on Tuesday.

And apparently Bobby has already noticed and put it on his own social media (!).

The first clue was for Antoni's installment, who's hiding somewhere on South Street between Broad and 13th Streets. And on Monday, the artists revealed that Bobby is somewhere in West Philly.

@antoni !!!!!! last day of pride month but @symonesalibstudio and i are extending the celebration... the cast of Queer Eye is IN PHILLY so obviously we have created a Fab Five scavenger hunt!!! First up, @antoni !!!! Be on the lookout all week for clues about where the others are! #queereye #fabfive #fab5 #antoni #jvn #karamo #bobby #tan #pride #pridemonth #phillystreetart #yarnbomb #netflix #jonathanvanness #phillyart #lgbt