The actress and writer behind the Philly-based ABC sitcom urged viewers to instead push for political change. It's the correct move 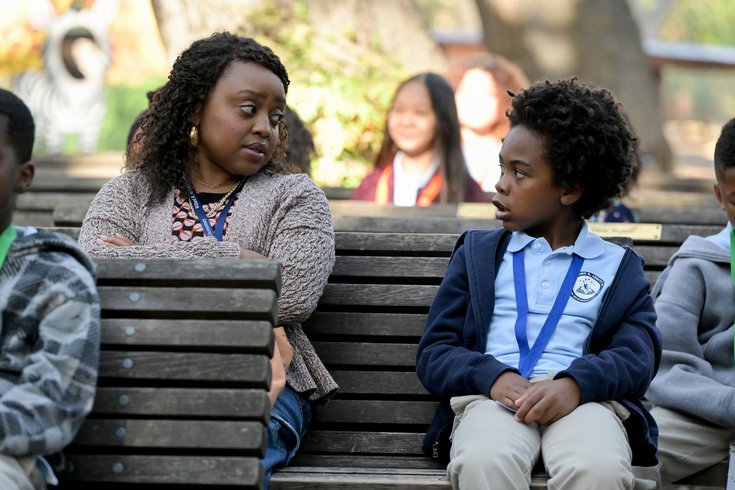 Quinta Brunson, star of the ABC comedy 'Abbott Elementary,' rejected calls from some fans to write an episode dealing with a school shooting in the wake of the deadly massacre at Robb Elementary School in Uvalde, Texas. The photo shows Brunson, left, in an episode of the show.

The mass shooting at Robb Elementary School in Uvalde, Texas renewed furious calls for gun laws that can better prevent senseless incidents of the kind that occurred in there Tuesday, when 19 children and two adults were killed by an 18-year-old gunman.

The chronic failure of this country's political leaders to address glaring deficiencies in firearm access has conditioned the populace to recognize these shootings as an expected fact of life and dysfunction in the United States. There have been impassioned pleas from some legislators, celebrities and the family members of victims in past school shootings, but all of the habitual deflections have likewise been voiced to scapegoat anything other than the irresponsible ease of obtaining guns with minimal safeguards.

In an irrational nation, it's disappointing, but unsurprising, that some people seem to view this subject matter as ripe for fictional adaptation on a popular TV sitcom.

On Wednesday, "Abbott Elementary" star and writer Quinta Brunson tweeted that some fans of the series, which is set at a Philadelphia public school, requested the show do an episode about a shooting. Brunson, a West Philly native, wrote that these people's priorities are misplaced. Brunson provided an example of one of the requests she received in a thread on Twitter.

wild how many people have asked for a school shooting episode of the show I write. people are that deeply removed from demanding more from the politicians they've elected and are instead demanding "entertainment." I can't ask "are yall ok" anymore because the answer is "no."

please use that energy to ask your elected official to get on Beto time and nothing less. I'm begging you.

I don't want to sound mean, but I want people to understand the flaw in asking for something like this. we're not okay. this country is rotting our brains. im sad about it.

Exhibit A: one of many. pic.twitter.com/mxcKWl3c17

Brunson, 32, also noted that she's been confronted with gun violence throughout her life in Philadelphia and Chicago, and that the only path forward is to mobilize in ways that demand more from the people we elect to positions of power.

I read about gun violence often. My city and family have been affected by it. Gun violence is a constant, day after day problem. Mass shootings are only part of it. Stop saying nothing can be done. Read this: https://t.co/ZblhYZQ5ir

In the hours after the shooting, CBS decided not to air an episode of "FBI" because it dealt with a potential school shooting. It was the right decision. It's important to create clear lines between reality and dramatization if this country is ever going to confront how abnormal and wrong it is for people to be randomly targeted and killed on account of unstable individuals having better access to guns than they do the help they need to improve their lives — and a social environment that effectively, unequivocally encourages this.

"Abbott Elementary" has been a hit in its first two seasons on ABC and has cultivated a platform to address real issues, albeit usually under a humorous lens.

The truth is, we don't need mass entertainment to see that young people are growing increasingly fed up with leaders — mostly Republican — who play into hatred and shamefully pivot incidents like Uvalde in order to preserve power in a cynical democracy. In March, Republican Texas Congressional candidate Jeff Younger was greeted at the University of Texas with student chants of, "F*** these fascists," specifically in response to Younger's vocal opposition to his own child's transition as a woman.

Is it any shock that in the aftermath of Tuesday's shooting, lies were spread that the shooter was a transgender woman? Republican Arizona Rep. Paul Gosar even shared a tweet blaming the shooting on a "transgender leftist illegal alien," before deleting it after the damage was done and he scored points with a hateful base. This is someone elected to represent and determine policy in the United States.

None of this is to say that "entertainment" can never be used to deal with the issue of school shootings, or other rips in the fabric of our society. Gus Van Sant's 2003 drama "Elephant," released four years after the Columbine shooting, is a case in point. The movie succeeded precisely by draining the event of a school shooting of any intrigue. It demonstrated the common root of empty cruelty and the carnage that guns in the wrong hands can inflict on completely innocent people, who had families and lives ahead of them cut short.

Brunson's point remains the same as it has always been to move this country forward in preventing mass shootings. Voters have the opportunity in primaries and in November to make politicians pay for their prevarication about common sense gun laws, their acceptance of campaign funds from a lobby that ties their hands, and their gutless indifference to human life.