Ramsey: Philly has made progress on officer-involved shootings 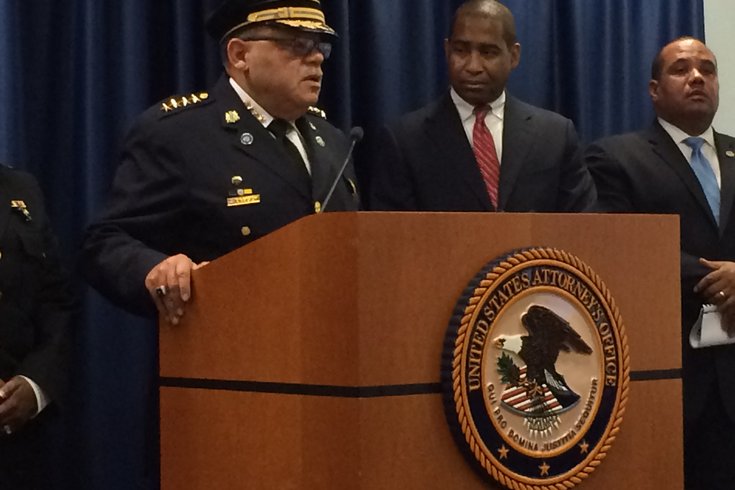 Philadelphia Police Commissioner Charles H. Ramsey discusses how the police have addressed recommendations to improve the department's handling of police-involved shootings and use of deadly force on Tuesday.

In stepping to a podium on Tuesday to discuss the progress that the city's police force has made since the U.S. Department of Justice began assessing how it handles police-involved shootings and the use of deadly force by the Philadelphia police, Commissioner Charles H. Ramsey had some interesting numbers to share.

The first year of the justice department's review in 2013 revealed that the Philadelphia police killed 11 people in officer-involved shootings, he said. Thus far this year, two individuals have been killed by police gunfire.

Last year, Ramsey said, there were 24 incidents of officer-involved shootings throughout the city and eight so far this year.

Ramsey told the media gathered for the release of a six-month progress report into the Philadelphia police's actions on 91 recommendations, compiled by the U.S. Department of Justice's Community Oriented Policing Services, intended to address the city's police force's use of deadly force and follow-up handling of investigations into officer-involved shootings, that eight officers have died under his watch – including Robert Wilson III, who was killed during a robbery in March.

"We are very proud of the work we have done," Ramsey said. "But, there is still work to do."

The reduction in police-involved shootings, he said, stem from a number of root causes – updated training procedures, use of force policy changes and changes to how the police handle investigations into officer-involved shootings. To date, the police department has completed 21 of the justice department's recommendations with another 60 in progress and one more nearly completed. That leaves nine recommendations yet to be addressed.

Tuesday's report on the justice department's recommendations – and the progress that has been made since Ramsey requested a review of the force's work in 2013 and the release, in March, of a report detailing issues that have been found – addresses police use of force practices, officer training procedures, the handling of investigations into police shootings, police accountability and external oversight and transparency of investigations into police-involved shootings.

Some of the issues have been completely addressed, like updates to police directives concerning the use of force, while others will take longer to complete.

Of the nine outstanding issues, Ramsey said, most relate to issues of crime scene investigations during police-involved shootings and how these types of shootings are investigated.

Ramsey said that he has been working with the Pennsylvania State Police to create procedures that would put state troopers in charge of investigations into police-involved shootings in Philadelphia. If this can be done, Ramsey said, it would "take care of these recommendations that are listed as 'no progress.'"

"The details are still being worked out," he said. "But, they would be the ones to write the report."

This step, Ramsey said, is crucial to helping restore confidence in a public that is critical of the police following any shooting that involves an officer. If the only body investigating a police shooting is the city's own internal affairs department, Ramsey said, the public's "perception of it is biased."

"This is a crucial step," he said.

Also, he said, other recommendations that would need to be addressed, like refining how officers are disciplined after a shooting would need to wait until the next round on negotiations with the Fraternal Order of Police in 2017.

Ramsey noted the changes to police training and the department's new award recognizing officers for tactical de-escalation for police who are able to diffuse potentially dangerous situations without violence.

"This is a new dimension," he said. "We are starting to really focus on that, as well."

"These are situations where the officers could have used deadly force, but they didn't," Ramsey said.

Richard Ross, who has been named as Ramsey's successor under Mayor-Elect Jim Kenney, said he would continue Ramsey's efforts to address the outstanding recommendations.

"We've got one of the best police commissioners in the country. Why would I want to do anything different?" Ross said. 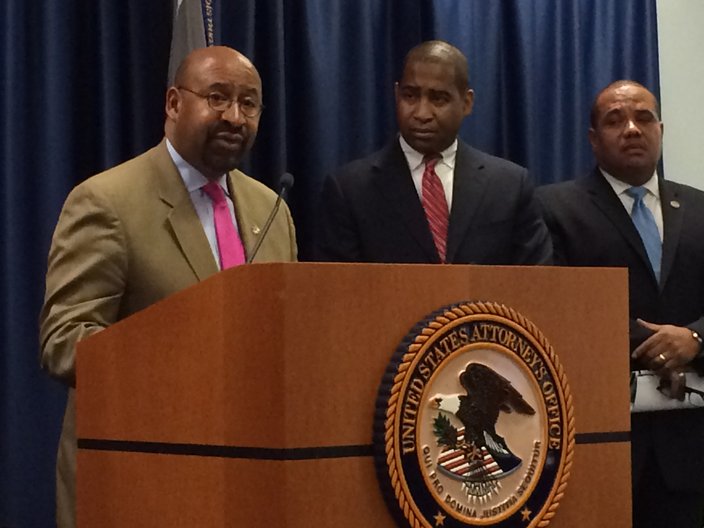 Mayor Michael Nutter addresses the Philadelphia Police Department's improvements in addressing issues in use of deadly force and police involved shootings that have been found by the U.S. Department of Justice. (Hayden Mitman/PhillyVoice)

In taking a moment to address the audience, Mayor Michael Nutter noted the city's police force's progress on these issues surrounding police involved shootings and reminded the crowd that while police have reduced the number of police-involved shootings significantly, homicides throughout the city have gone up this year.

Nutter said last year, 240 people were murdered in the city. So far this year, he said, there have been 270 murders in Philadelphia.

He also noted the officers that have died in the line of duty during his time in office and said that while journalists gathered for the press conference needed to report on incidents of officer-involved shootings, they need to remember that citizens are shooting at police.

A fact he said made all too real to him several times when he visited wounded officers in local emergency rooms.

"Please report on the fact that people keep shooting at officers," Nutter said. "I saw one of our officer's chest cut open ... because a doctor was holding his heart."

In a silent room, stunned by the mayor's discussion of wounded and dying officers he had visited, Nutter ended the day, taking some time to detail a long trail of blood he followed in a hospital hallway on his way to visit a wounded officer.