Random Eagles (and NFL) notes: The other side of the Dallas Goedert story, WASTEAM's name change 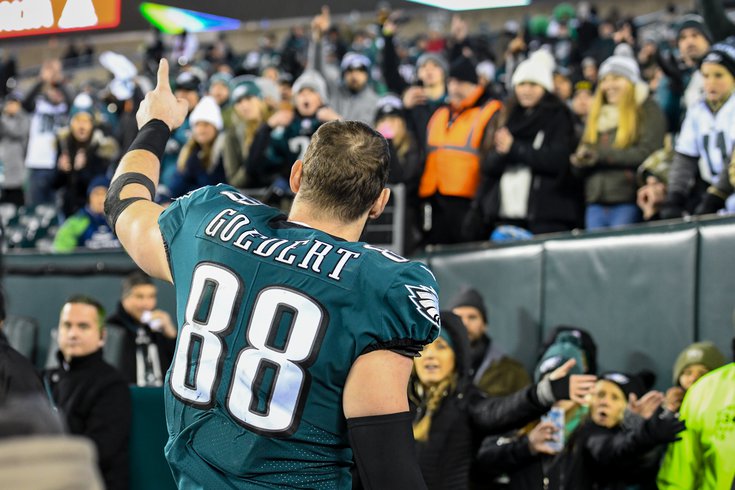 Dallas Goedert thanks fans after the Philadelphia Eagles wild card game against the Seattle Seahawks at Lincoln Financial Field in Philadelphia on January 5, 2020.

Yes, it's July 4th, and it's going to be a beautiful day in the Philadelphia area and nearby shore towns. There are burgers to eat, beverages to drink, and dogs to be terrified by inconsiderate clowns setting off fireworks.

The other side of the Dallas Goedert story

We're a little late on this, but the man who seemingly "sucker punched" Dallas Goedert, whose name is Kyle Hadala, has told his side of the story, via TMZ (h/t BGN), and is lawyering up. (He took some punishment too, as shown in pictures within the TMZ story.)

Hadala insists Goedert and his friends had been "harassing" them at a previous bar over the choice of music they were playing on the jukebox.

"They were extremely aggressive and disrespectful," Hadala says.

The group moved to a new spot -- the Zoo Bar -- but Hadala says Goedert and his crew followed them with bad intentions. Very soon, according to Hadala, the situation escalated.

"They picked out my smaller colleague from the group, got in his face, and made very threatening remarks toward his personal well-being," Hadala tells us.

Hadala says Dallas put his hand on his friend -- which you can see in the video ... and that's when Hadala decided to take action.

"At this point, I was in fear for both of my friends' well-being especially due to the fact there were 10 of them and we were not familiar with the area," Hadala says.

"I protected my friend and then was ambushed by 5 to 7 individuals that punched, kicked, threw beer bottles, etc., trying to cause me bodily harm which I received medical treatment at the hospital for my injuries the next day."

From the widely circulated video of the incident, it does indeed appear that Goedert put his hands on someone in an aggressive, unwanted way.

Would it be a little cliché for a sportswriter to suggest that Goedert just not be out at a bar in the wee hours of the night during one of the worst pandemics the planet has ever seen? Well, you know, he shouldn't, probably, right?

Over the last few days, there has been mounting pressure on Dan Snyder to change the Washington team's nickname, such as:

In response to the pressure, the Washington team put out a statement saying that they would "undergo a thorough review of the team's name," while somehow managing to print the word "redskin" in some form 10 times.

Snyder had previously stated, "We'll never change the name... It’s that simple. NEVER — you can use caps.” Welp. Outside influence finally put it in a way that Snyder understood. (Money, to be clear. I'm talking about money.)