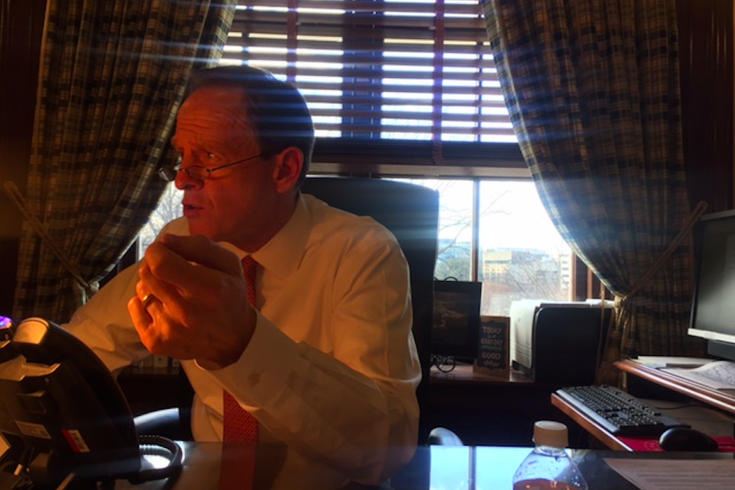 During Thursday afternoon’s “tele-townhall,” U.S. Sen. Pat Toomey fielded 10 questions ranging from “why don’t you answer your phones?” and “why do you insist on calling your constituents protesters?” to queries about his positions on gun control, Education Secretary Betsy DeVos and sanctuary cities.

The event – publicly announced about 90 minutes beforehand – lasted a shade under 45 minutes and featured interactions both supportive and critical of the senator’s stances.

It started with an 11-minute monologue.

Dialing in from his Washington, D.C. office, Toomey spoke about the overwhelming number of calls his offices have fielded lately from both “Pennsylvania citizens who have something on their minds” to “orchestrated efforts to block our phone systems.”

Much of those comments match public statements the Republican senator has already made.

When he jumped into questions submitted via social media, the TeleForm app and calls made to random constituents, things got a little less predictable.

Here is a quick recap of what you may have missed (and judging by the online reaction to the speedy nature of announcement to event, many of you did):

QUESTION 1 (no name shared): Why don’t you answer your phones?

Toomey explained he doesn't have a huge call center and that staffers get calls and voicemails as quickly as they can. “We never turn our phone off as some have foolishly claimed,” he said.

Toomey recapped the story as best he understood it and said that lying to Vice President Mike Pence about the contents of his conversations is “a fireable offense.”

He also called into question, however, the possibility that American intelligence agencies were “spying” on a citizen.

“There are laws that prohibit them from spying on Americans and Gen. Flynn is an American,” he said. “We need to understand what happened here. Why was he being spied on? Who was engaged in it? Were they in violation of the law? Did they have a warrant do to that? Why was it leaked, and who leaked it to the press? We have new questions that need we need answers to.”

QUESTION 3: Someone submitted a question about the Affordable Care Act repeal and wouldn't it be "irresponsible not to have a replacement ready.”

Toomey spoke about the need to stabilize the current market and “we need to end up with a lot of choices, a lot of competition.”

QUESTION 4: Margaret from Oxford, Chester County, said she was “concerned about Russia and the antics they’ve been up to lately with the missile launch and the ship offshore.”

Toomey assured her that he was also concerned.

“Putin is a dangerous man. He’s an authoritarian. He’s stolen tens of billions of dollars from the Russian people. The murders of Russian politicians. Journalists who challenge (him) end up dead,” he said. “And now, they are harassing Americans.”

He noted that he had faith that U.S. Secretary of Defense James Mattis and Secretary of State Rex Tillerson “are under no illusion” about the reality of the situation.

“I’m disappointed President Trump is not more openly critical of Vladimir Putin,” he said. “We need to push back aggressively.”

QUESTION 5: Jackie from Bucks County said she was disappointed with his vote for DeVos, particularly because she has worked with the Pennsbury school district and “we have to work really hard to make budget every year.” She questioned why he voted to confirm someone with no experience in public schools and who is “willing to tear them apart.”

Toomey said the vote was all about her “decades of life actively engaged supporting a cause I feel strongly about: school choice.”

“We can’t have an upwardly mobile society unless everyone has a shot at a good education,” he said. “I don’t believe Betsy DeVos intends to tear apart public education. Competition will elevate everybody’s game.”

QUESTION 6: Rick from Montgomery County said he thinks “you’re a good man even though I don’t agree with all your positions.” He also questioned an economy that doesn’t see much wealth trickle down to the working class.

Toomey noted the way to fix that is “reform the broken tax code, roll back regulations and end favoritism” that sees government help some industries and not others.

QUESTION 7: Linda from Pottstown, Montgomery County lauded his vote for DeVos and called out Philadelphia Mayor Jim Kenney's "sanctuary city" policies. "We're getting a lot of the not-so-nice population moving out into our town because it's nicer than the city," she said, noting new residents are "bringing their gunfights" with them. She wanted to know when that would get better.

Toomey laid out his opposition for sanctuary cities, most notably saying withholding federal funding from sanctuary cities like Philadelphia "is the reasonable thing to do."

QUESTION 8: A questioner named Margaret asked “why do you insist on calling your constituents protesters?”

Toomey responded that “the vast majority of my constituents aren’t protesters” but should someone pass by one of his district offices on, say, a Tuesday, they’d see many who are.

QUESTION 9: Katie wrote that this town hall was “not good enough” and “a cop-out.”

QUESTION 10: A constituent asked “if there’s anybody you don’t want to get guns at this point?”

Toomey hearkened back to background-check legislation that he and U.S. Sen. Joe Manchin introduced several years ago.

He said he was disappointed that it didn’t pass the legislature and hopes it, or something similar, will someday soon.

“We should not let people who are on a no-fly list to go down the street and buy an AR-15,” he said, before announcing the time was up for the town hall.