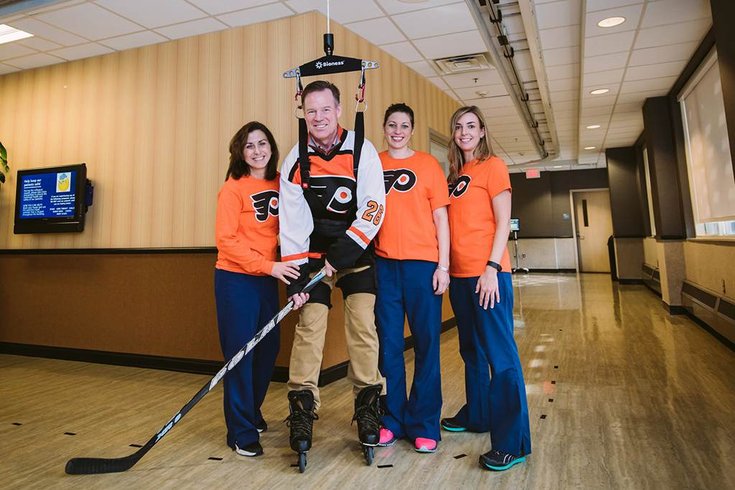 Former Flyers player Brian Propp recovered from a stroke at Magee Rehabilitation Hospital in Center City. Though the 'Helping Hands' scholarship program, he hopes to give back to those who face the challenges he faces during recovery.

When former Philadelphia Flyers star Brian Propp visited family in Annapolis, Md. last September, he was stricken by a “really bad headache” that rendered him unable to do anything but lay down and attempt to wait it out.

Little did he know at that moment that his headache was a precursor to a stroke.

“I stayed in and it wore off, kind of,” he recalled in a recent phone interview with PhillyVoice. Later that night, “I fell out of the bed, lost a couple teeth and my right side didn’t work.”

Relatives rushed him to a nearby hospital that night and, five days later, accompanied him north as he was transferred to Magee Rehabilitation Hospital in Center City.

During his month there – at a place where he visited patients during his playing days – he’d battle to relearn the basics of day-to-day life, using some innovative techniques that incorporated his former field of athletic employment.

Now, as he continues outpatient therapy a couple times each week, Propp has turned his attention to giving back to people who need a facility that helped him so much. That has taken the form of a personal mission launching Wednesday help stroke and brain-injury patients at Magee.

“Thankfully, I can still skate. I can’t shoot that well, so I’m turning into a checker.” – Brian Propp, Philadelphia Flyers, retired

Propp said his stroke was brought about by an atrial fibrillation, or irregular heartbeat with affects some 2.7 million Americans. That condition can send a clot to the brain, which triggers a stroke. He said he thinks that not getting a check-up for that existing condition meant, "I didn’t notice it that much. I probably needed to pay more attention.”

At Magee, therapists incorporated Propp’s playing days into his recovery process, which centers on physical, occupational and speech therapy.

Pondering how to get him back on skates, they brought a “robotic gait-training system” – described as a “robotic trolley on a conductive trail that senses patients’ movements and follows along” in Magee’s Can Do! newsletter – into the mix. 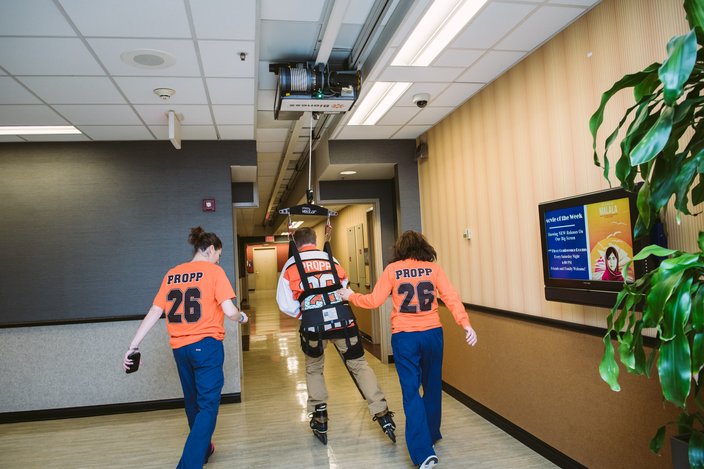 As part of the recovery process, Brian Propp's therapists at Magee Rehabilitation Hospital put him back on 'skates' to help rewire his brain to generate movement.

“We had [Propp’s wife] Kris bring in Brian’s rollerblades and a hockey stick. They both smiled at the idea and were excited to give it a try, and so were we,” said Magee occupational therapist Paula Bonsall. “I grew up watching the Flyers so I knew who Brian Propp was. We were really excited to see him skate again. We used his love of hockey to help the brain rewire to generate movement to increase function, and we were thrilled with the results.”

Propp acknowledged it was a challenge to get even to that point, let alone where he is today.

“It’s taken a long time to get back to where I need to be. I’m not working [full-time] right now. I just have to take time to keep busy with a couple things going on. It gets a little frustrating,” he said. “Right from the beginning, I couldn’t say much, and I’m getting a little more range back in the right shoulder. I just have to keep working at it.”

On the plus side, he’s gradually been able to get back to his day job at Wolf Commercial Real Estate in Marlton, a company that he’s been growing for a few years and expanding into Pennsylvania.

He’s been able to recover to the point of returning to his twice-weekly, invite-only pickup game with a group he’s played with for a quarter century now. A heartfelt Instagram post from his daughter Paige from the recent Flyers Carnival commemorated progress he's made since the stroke.

“Thankfully, I can still skate. I can’t shoot that well, so I’m turning into a checker,” he said. “Both feet, and my left side, work pretty well. With the right side, people won’t notice anything wrong. I’ve adapted to changing the way I do things. I look good, so that’s good, and my speech is getting better, even though I have trouble with certain words. If I slow down, I can get it.

“Things are getting a little better, but it’s still taking some time.”

Propp was asked for advice for people who have faced, or may face, similar medical predicaments.

“First of all, a lot of people have AFIb, so they should get checked at their doctor’s every year. You have to be aware of the dangers," Propp said. "Time is critical. People don’t realize they need to call 911 right away.”

He’s also working on giving back to the Center City hospital which helped with his recovery with the "Brian Propp Helping Hand Project,” to be announced Wednesday. It's already received a sizable donation from the Handen family, the amount of which wasn't released out of respect for the donor's humble nature.

Considering that the day hospital costs $1,000 a day, with patients attending for four to six weeks, the expense can add up quickly, particularly since insurance doesn’t cover everything that’s needed to help in the recovery process.

Through the scholarship program – which has a goal of raising $100,000 this year – donors could “sponsor a patient for a day, week or month.”

"We are delighted to be working with Brian, his family and friends to raise funds to help our patients continue their therapy," Chilutti said. "These funds will make a major impact in helping patients achieve goals while recovering from a stroke or brain injury."

Anyone interesting in donating can contact Mark Chiulutti at (215) 587-3226, visit mageerehab.org. or download a response form for sponsors (PDF).