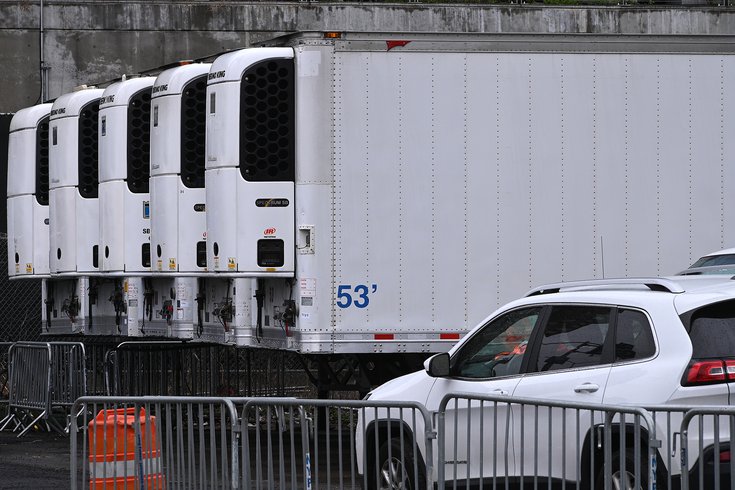 Refrigerated trucks being used for morgue overflow in NYC are pictured above. Philadelphia has secured refrigerated trucks for storing dead bodies if morgues become overcrowded due to coronavirus. City officials are clear to state that a possible sudden spike in deaths is not the only reason the trucks are needed. A decrease in funeral services, due to social distancing is also a factor.

The City of Philadelphia has secured refrigerated trucks for storing bodies if morgues become too overcrowded due to coronavirus, officials said.

Philly has trucks set aside for use if more storage of bodies is needed, City Managing Director Brian Abernathy said, the AP reported. Refrigerated trucks aren't necessarily needed just because of an increase in deaths, but also for a decrease in public burials due to social distancing measures.

"This isn’t because we expect a large influx of people succumbing to the illness," Abernathy told AP. "But rather it’s likely that there will be fewer funerals, which will cause backups in both our city morgues as well as the hospital morgues."

The city has around 25 deaths total as of Saturday. Pennsylvania's coroner association said as well that it is organizing resources, and helping with planning that will differ depending on the region. There are around 100 deaths in the state total, but most have occured in the Southeastern part of Pennsylvania.

Although cities across the country are scrambling to secure trucks of their own, Philly's trucks are already on the way, according to Billy Penn. NYC is already using trucks like these to store bodies.

The "makeshift morgues" are parked outside of hospitals and take in bodies of people that died due to coronavirus complications. Handling of coronavirus corpses also needs special attention, as there is no certainty of how long the disease can live inside of a dead body.

Since the disease is novel, funeral workers and coroners are taking extra precautions to isolate these bodies, to prevent risk of contracting the disease themselves.

Emergency alternatives for handling a sudden increase in death rate due to coronavirus have appeared in other countries as well. In places like Spain, which currently has the second most coronavirus cases after the U.S., an ice rink is being used as a morgue. In Ecuador, bodies are being left in the street due to failures in infrastructure.