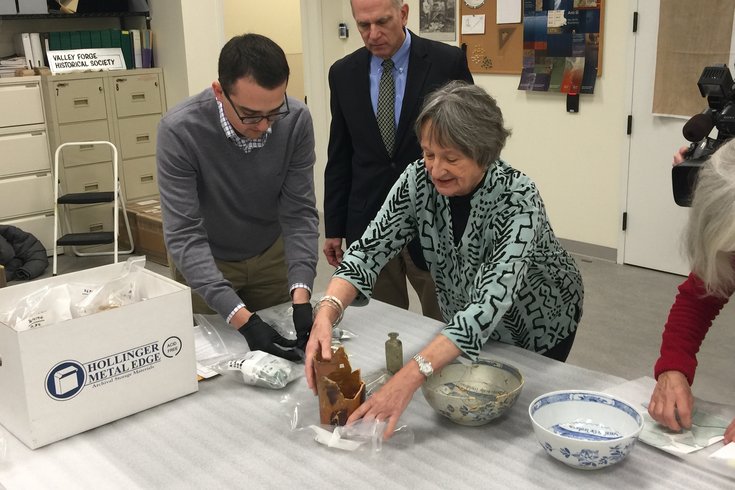 Rebecca Yamin, lead archaeologist at the Museum of American Revolution's Old City site, showcases one of the artifacts returned to Philadelphia on Tuesday, December 6, 2016.

Just before 11 a.m. Tuesday, a Ram 2500 pickup truck with Michigan plates pulled into a loading dock at the Museum of the American Revolution. It was packed with 75 boxes of archaeological artifacts that illuminate the historical legacy of the Old City site.

History and archaeology buffs (and staffers) awaiting the arrival of Juliette Gerhardt – driver and lab director at Commonwealth Heritage Group – couldn’t be more excited about what those artifacts represented for the museum, slated to open on April 19.

In those boxes were artifacts from Commonwealth’s archaeological fieldwork at the site over the past few years.

What makes them unique is the fact that many discoveries speak to what the corner of Third and Chestnut represented during the era that the museum will celebrate.

Specifically, the dig turned up relics from the site’s former life as an illegal tavern where many conversations related to the revolution took place.

Cups for pints and half pints.

Broken glass on which names and phrases were etched.

Handpainted punch bowls created to commemorate a ship that carried an anti-Stamp Act message from Philadelphia merchants to English manufacturers in 1765. 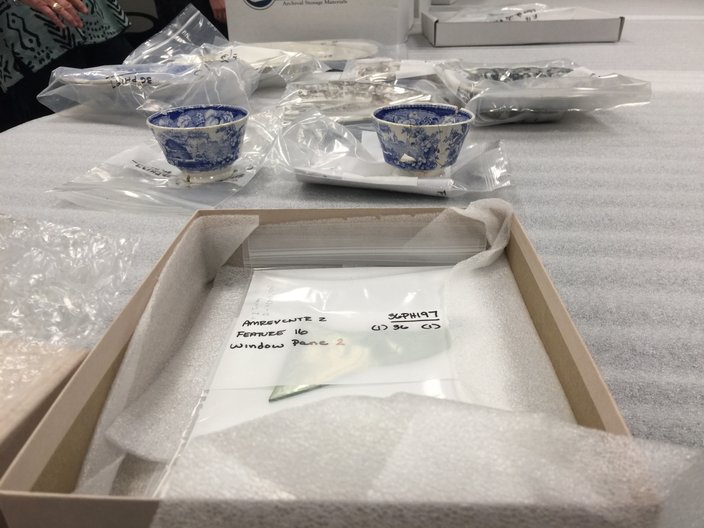 Many relics returned to the Museum of American Revolution on Tuesday were traced back to the site's former life as an illegal tavern in Old City.

That latter relic – pieced back together and set out next to a replica in a secure curator workspace in the museum's basement – speaks to the very nature of the museum itself, said Rebecca Yamin, lead archaeologist at the site.

“It’s so relevant to the mission of the museum that it was just too good to be true,” she said. “Also, the bowl is beautiful. It goes with a bunch of other wonderful artifacts that bring a tavern of the period to life. Taverns were the cauldron of the American Revolution. It’s where politics got argued. It’s where people, all different kinds, sat together and passed punch bowls around.”

This particular tavern – illegal, no less – sat just 30 feet from where staffers wheeled the boxes from the truck for safe keeping on Tuesday.

Also unpacked on Tuesday were artifacts discovered on site that were traced back to another Chestnut Street tavern of the Revolutionary Era: pipe stems, buttons and shells (from the site’s later iteration as a button factory in the 1920s), lead weights, marbles and more.

“When you do an urban site, you don’t know what you’re going to find,” said Yamin of fieldwork conducted from July to October 2014, and again in April 2015 and this past May. “We have a record of the whole history of Philadelphia on this one site, and that’s a neat story to be able to tell.

“We have the whole span of change in Philadelphia as suggested by remnants that really date to those periods. There’s something very special about being able to tell the whole story of Philadelphia on the site of a museum. It’s not usual. Archaeology often gets left out (of museums) because it’s not the history people are used to reading about in books.” 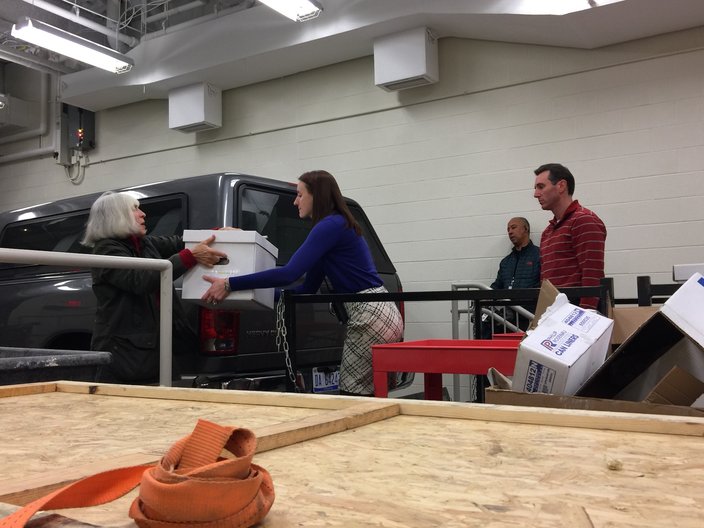 Juliette Gerhardt, archaeological lab director at Commonwealth Heritage Group, hands a box of artifacts to Michelle Moskal, assistant registrar at the Museum of the American Revolution, in the museum's loading dock on Tuesday, December 6.

What makes these relics all the more important is the fact that they “relate to everyday people” instead of the well-off who are often more regularly remembered as time goes by, she said.

“It fleshes out that part of what was happening, of the story,” she said. “When we’re thinking about the Revolutionary Period, it’s wonderfully exciting because you’re not just thinking about the people who were calling the shots, but the people who were worried about what’s happening to our society. These things connect you to that process. It’s exciting to have those connections.”

Standing in the basement room where all the boxes were taken upon arrival, Michael Quinn – the museum’s president and CEO – concurred with Yamin’s excitement over telling “the story of everyday people” from that era through these relics.

“This is a microcosm of Philadelphia history,” he said.