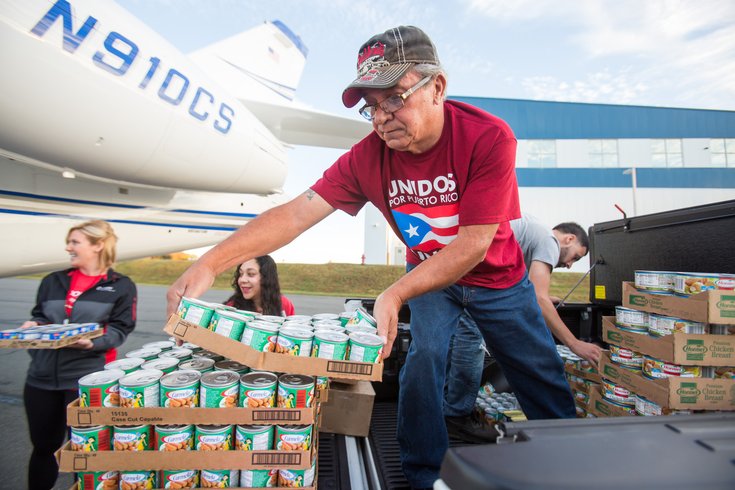 Camden County resident Frank Rivera was one of the volunteers who helped load food and water onto two planes bound for Puerto Rico on Tuesday, Oct. 10, 2017, at the Trenton Mercer Airport in Trenton, N.J.

Critical supplies delivered by two corporate jets laden with tons of supplies from volunteers in Camden County have made their way to Puerto Rican authorities for distribution, according to one of the good Samaritans who made the flight, interpreter Jinely Rosado.

Water, food and clothing collected by local volunteers landed Tuesday in devastated Aguadilla, on the island's northern coast, where residents are lacking food and water, and many have lost their homes in the aftermath of Hurricane Maria. The humanitarian mission had support from Cooper University Hospital, the Norcross Foundation and the Michaels Organization.

State Sen. Nilsa Cruz-Perez, a Camden County Democrat, as well as Frank Moran, the president of Camden City Council, and seven volunteers from Camden County collected the thousands of pounds of supplies.

The bottled water and food – canned meats and noodles mostly, since electricity and fuel are in scant supply on the island – came from donations from the Ravitz Family Market’s Price Rite grocery in Camden.

Clothes, hats and blankets from Cooper were also donated. 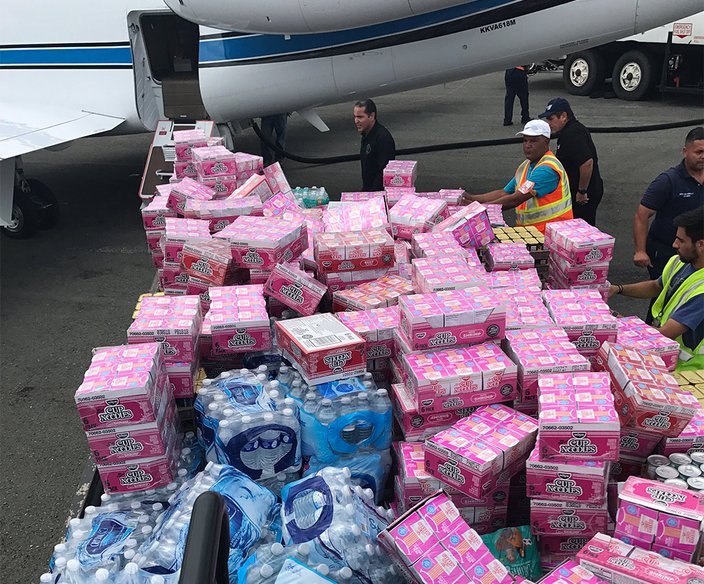 Workers load supplies sent from Camden onto a truck for delivery to a small village of about 600 called Arecibo, which has not received much assistance from the government since the hurricane hit Sept. 20. Arecibo is about 25 miles east of the airport in Aguadilla.

Each plane was able to carry a load of two tons, lead pilot Aran Bar-Or said Tuesday morning before liftoff.

Bob Saunders, coordinator of the Medical Coordination Center at Cooper University Hospital and manager of emergency preparedness, who had previously arranged for a supply of clothing and blankets to head to the island via a military transport, is awaiting the go-ahead to move the remaining supplies to upcoming military flight in order transport rest of the donations to Puerto Rico that could not squeeze aboard the twin jets.

The remaining supplies will get delivered to a National Guard Armory in Mount Holly once details are ironed out for the eventual flight out of Fort Dix to Puerto Rico, said Saunders.

Saunders said his job of “improvising at the last minute” helped pull the flight together Tuesday morning. He said making connections with military and police already on the ground should assure the supplies “go the last mile.”

"I had the easiest lift and everyone else did the heavy lifting," said Saunders. 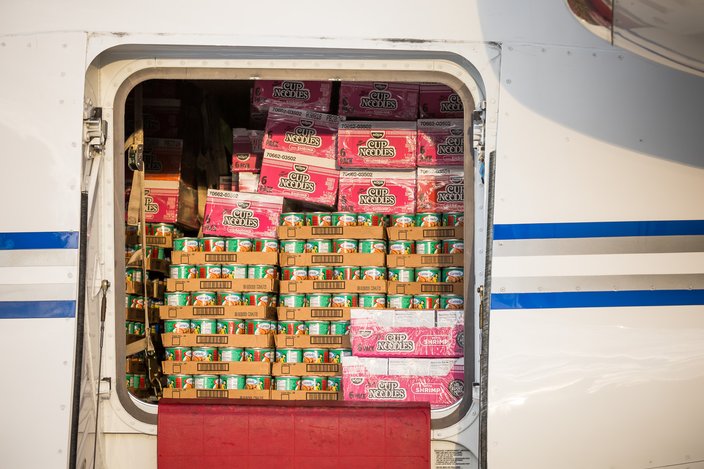 Each of the two jets flying to Puerto Rico were able to carry 4,000 pounds of cargo.

Lexie Norcross, founder and CEO of PhillyVoice, represented the hospital's foundation and also her family’s foundation.

She accompanied the supplies to the U.S. territory with Rosado, an interpreter at Cooper who had established contact with a health official in Puerto Rico to establish what is most needed.

Rosado confirmed Wednesday to PhillyVoice that local police had taken custody of the supplies, which were destined for Arecibo, a town of about 94,000 about an hour and fifteen minutes drive from the airport on the north coast.

Dr. Anthony Mazzarelli, a senior executive vice president with Cooper University Health Care, who coordinated the hospital's efforts, said many of his employees have family and friends on the island.

"We believe it’s our obligation to help in any way we can," he said. "We are happy to provide much needed supplies to assist in recovery efforts”.

The planes had landed at Rafael Hernández Airport, where they remained for about an hour on Tuesday, long enough to refuel and unload.

Cruz-Perez thinks as many as half of Camden’s Spanish-speaking residents have ties to Puerto Rico; Moran said he’s certain about 25,000 of the city's 74,000 residents are linked to the island.

Like the other volunteers, Moran, dressed in a “Support Puerto Rico” T-shirt, and Cruz-Perez spent part of Tuesday morning comparing notes about where friends and family live on the island, how they have fared since the storm, and what current conditions and recovery look like. 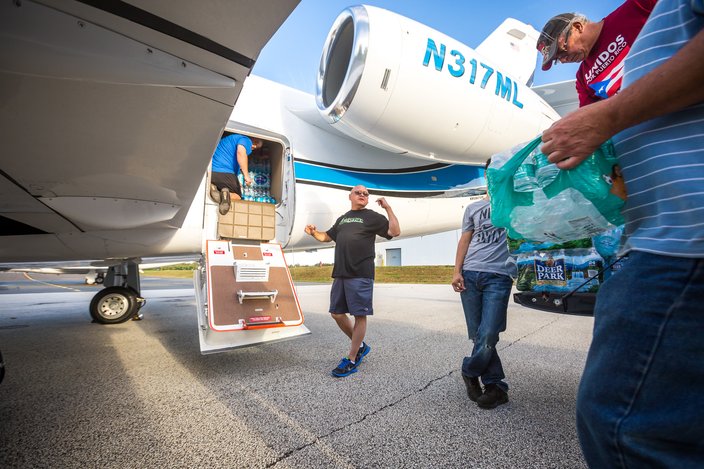 Lito Moran, center, and other volunteers work Tuesday morning to prepare two jets for a humanitarian mission to Puerto Rico.

“No help has been distributed in that area,” said Cruz-Perez of Arecibo. “They have little or no food and water. A lot of the residents have completely lost their homes.”

Saunders said Moran and Cruz-Perez had worked with “a very motivated” circle of volunteers.

The politicians, who remained on the ground, were assisted at the airport by volunteers Luis Rivera, Luis Miranda, Luis Morales, Antonio Roque, Efrain Rivera, Luis Camacho and Lito Moran.

They, along with Norcross and Rosado, formed a line and filled the cargo holds and closets of the planes with supplies on Tuesday.

Rosado, who has family on the island, one member with running water, but no electricity, said this is her first “mission trip.”

“Oh, man, this means a whole lot,” she said of the flight to Puerto Rico, where she has often visited often, though she was born and raised in Camden.

“On the ground, I will be the voice,” she said of her role. 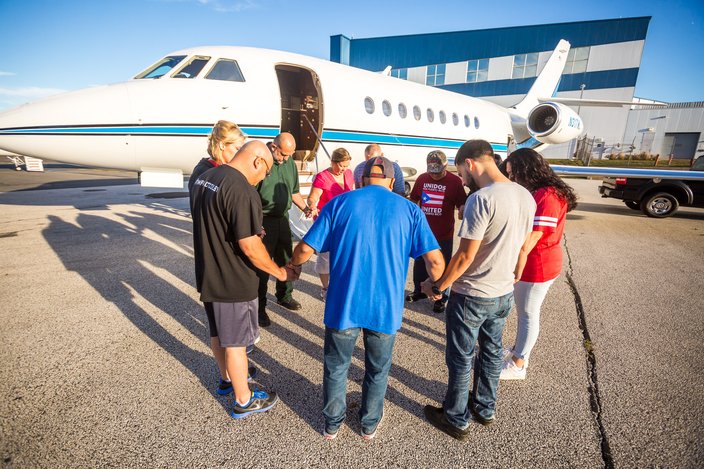 For her part, Norcross said her involvement stemmed from her family’s values.

“My grandparents and parents taught me that you shouldn’t need to be asked when people need help — it’s what we do for our neighbors. That’s why Cooper and The Norcross Foundation offered to send whatever aid they could to help the family members of our community in Camden who are suffering in Puerto Rico. 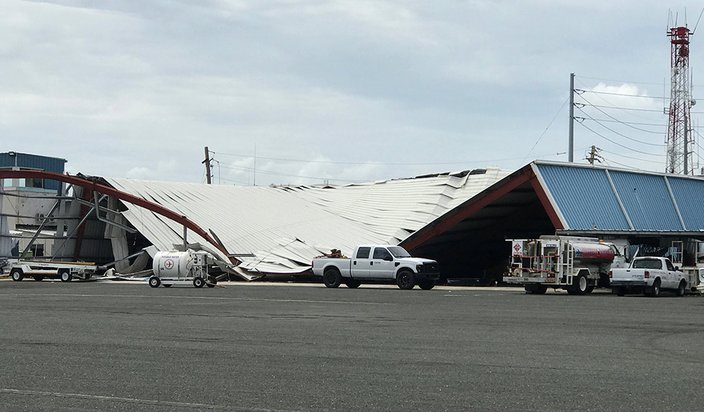 Hurricane Maria heavily damaged this building at the Rafael Hernández Airport in the town of Aguadilla.

“We were told that the number one thing they needed was clean water and that’s why we are headed to Puerto Rico with as much water as we could safely carry, along with some non-perishable food, clothes and blankets," she said.

“Puerto Rico’s recovery will be a long road, and Cooper and The Norcross Foundation will be working alongside our community — here in Camden and there in Puerto Rico — to help them rebuild.”

The Cooper Foundation also is running a fundraising campaign to assist the Caribbean island. Anyone who would like to contribute can donate to the Puerto Rico fund on the foundation's website.

The donations will be sent directly to Puerto Rico and distributed to the United for Puerto Rico Foundation and the Salvation Army.