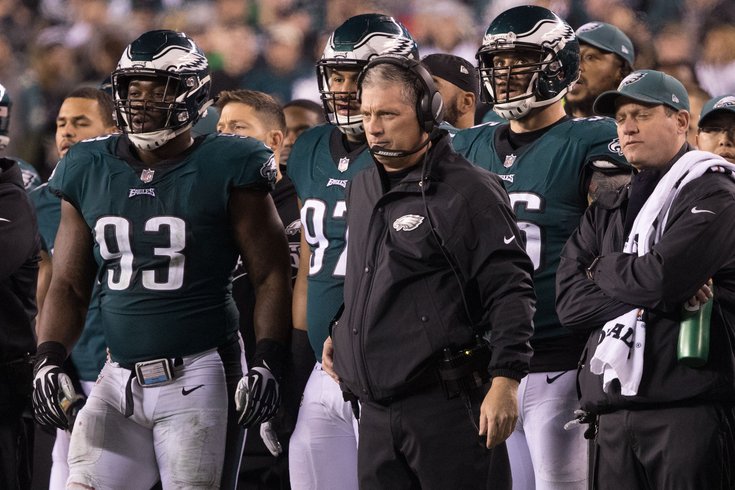 For Philadelphia Eagles fans, the 2017 season was a roller coaster of emotion, to say the least. But unlike the previous 56 times they strapped in for this same ride, the car never careened off the tracks before reaching its destination.

No, this time it concluded with the Eagles hoisting the Lombardi Trophy on Sunday night in Minneapolis, sparking a party in Philly that will like keep raging right through Thursday's Super Bowl parade, the first in the city's history.

But that doesn't mean it was a smooth ride throughout. If the season was a roller coaster, it was an old wooden one, like the Great White on Morey's Pier in Wildwood, full of bumps and bounces and moments when you weren't quite sure you'd reach the end in one piece.

Let's take a look back at some of those moments from the Eagles season – the moments some fans started to let that familiar feeling of doubt that had been realized each year for over five and half decades, the moments that would've derailed this team in the past – and try to offer some perspective on just what this team overcame on its way to capturing Philly's first Super Bowl...

Because there's a good chance you've already forgotten about some.

With Kendricks, Kelce on the trade block, Eagles fail to make a deal

It would seem the Eagles might bring Kelce bring in 2017. The team reportedly won’t cut him, and Eagles have said they want him back. But I’m just not buying that he’ll be around for this season. The Eagles have reportedly shopped him so it seems like they’re holding out hope for a trade. Parting with Kelce, who turns 30 in November, would save the cap-strapped Eagles a total of $3.8 million in cap room.

There’s no question cutting Kelce would be hard from an emotional perspective, but the reality is he’s paid like a top 10 center and he just hasn’t played that well for the past two seasons.  [Brandon Lee Gowton, Bleeding Green Nation | 03.16.17]

Cox's decision to miss OTAs, however, is a little more curious. Last offseason, he signed a new six-year, $103 million contract extension. While Cox played well last season, he was not the elite defender his contract would dictate he should be...

Leaders don't miss practice after signing contracts worth over $17 million per season, unless they have a very good reason. We'll see.  [Jimmy Kempski, PhillyVoice | 05.23.17]

Maybe the receivers are just that good, and the Eagles are going to break records offensively this season. Or maybe their corners just stink.

Any casual Eagles observer could easily identify that the cornerback position was likely to be the team's weak link in 2017. After eight days of training camp, the corners have done nothing to quell those concerns...

Unless the Eagles can somehow summon the powers of Mr. Miyagi to heal rookie Sidney Jones' ruptured Achilles so that he can start playing immediately, there's absolutely no way the Eagles can head into this season with the corners they presently have on the roster.  [Jimmy Kempski, PhillyVoice | 08.01.17]

Showing just how tight they had become, Wentz was the one who drove Matthews to the airport. He said Roseman did not ask for his input before making the trade and notified him just before it went public...

According to a source, the higher-ups were concerned about how a Matthews trade would affect the locker room. Chemistry is a fragile thing, and there's no telling how the dynamics will shift when a key component -- not to mention a best friend of the star quarterback -- is removed. Ultimately they decided to roll the dice in the name of adding balance to the roster. Most players understood the decision, but the football side took a backseat Saturday.  [Tim McManus, ESPN.com | 08.12.17]

Speculation in recent days has emerged that Philadelphia Eagles starting running back LeGarrette Blount may not make the 53-man roster when NFL teams make cuts after their final preseason games.

Not so, said Doug Pederson today, when asked about Blount's status with the team.  [Jimmy Kempski, PhillyVoice | 08.22.17]

"My beloved 76ers once hired a guy by the name of Roy Rubin from Long Island University. Poor Roy. He finished 4-47 before the Sixers canned him. 4-47! Years later, Fred Carter said ‘Letting Rubin coach was like letting a teenager run a big corporation.’"

"Hey Fred, meet the Eagles’ head coach, Doug Pederson! Now, everybody knows Pederson isn’t a head coach. He might be less qualified to coach a team than anyone I’ve ever seen in my 30-plus years in the NFL.

"Pederson was barely a coordinator before he became head coach. Can you imagined if we elected a United States president who didn’t have any real training? Sorry, don’t answer that." –Mike Lombardi   [Jimmy Kempski, PhillyVoice | 09.04.17]

At the very least, the optics aren’t favorable. One Eagles staffer said the only coach who probably doesn’t think Schwartz is trying to undercut Pederson is Pederson. Three players, who requested anonymity, said that it’s become well-known in the locker room that Schwartz is waiting to usurp power.

On the field, Sproles is the Eagles' most well-rounded running back, as he can run inside, run outside, be a weapon in the passing game, and he's easily the team's best back in pass protection. Obviously, because of his small size, however, Sproles has been never been used as a 'workhorse' type of back, but he is typically on the field in the Eagles' most crucial situations.

Additionally, Sproles' contributions over the years as a punt returner cannot be discounted. The Eagles have won games they otherwise might not have, if not for big plays on special teams from Sproles...

Off the field, the Eagles will be losing one of the most respected players in the locker room.  [Jimmy Kempski, PhillyVoice | 09.25.17]

"I think one of the things that I've talked about – and hopefully you've seen it with the players – is that it's definitely the 'next man up' [philosophy] and they rally around the guys who are hurt and support them. But at the same time, the bigger picture is that we still have a lot of football left and we still have a game this Sunday.

The Philadelphia Eagles suffered their doomsday scenario on Sunday when Carson Wentz tore his ACL while trying to run for a touchdown against the Los Angeles Rams. Doug Pederson confirmed the tear in his day-after press conference Monday afternoon.

In Wentz's absence, the Eagles turned to veteran backup Nick Foles, the last quarterback to suit up in the playoffs for the Eagles, back in a 2014 playoff game against the New Orleans Saints after the 2013 season. Foles was able to close out the victory on Sunday in Los Angeles but looked nowhere near as capable of Wentz of putting the team on his back through the playoffs. Foles will be the starter going forward, with third quarterback Nate Sudfeld moving up to the primary backup spot.  [Jimmy Kempski, PhillyVoice | 12.11.17]