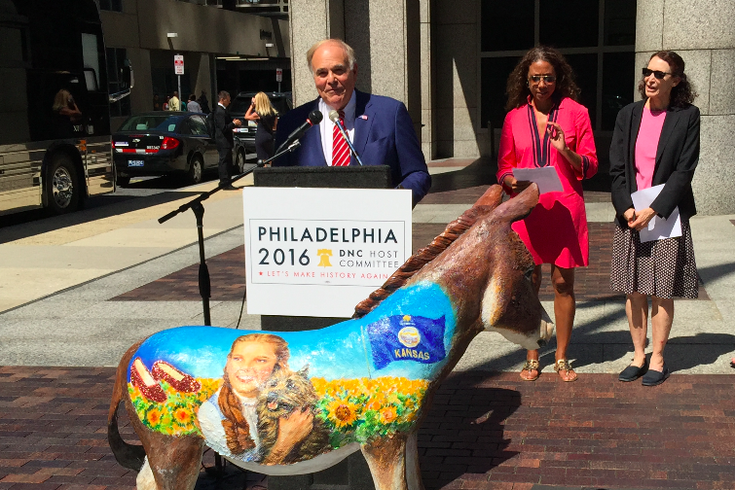 Ed Rendell speaks about the success of the 'Donkeys Around Town' initiative during Democratic National Convention month in Philadelphia; 52 of the 57 donkeys have been claimed but the remaining will be auctioned off at a later date.

After a press conference celebrating the impact that 57 fiberglass asses – er, donkeys – had during the Democratic National Convention, former Mayor and Gov. Ed Rendell was asked to weigh in on the tumultuous week in the world of Donald Trump’s presidential campaign.

The setting was the corner of 18th and Cherry streets, the location of Kansas’ Wizard of Oz-themed donkey featuring artist renderings of Dorothy, Toto and ruby slippers. (It just so happened to be Rendell's favorite one.)

There, Rendell – whose seen more than his fair share of political campaigns come and go – noted that the current one is unlike anything he’s ever seen.

But cool your jets with the thought that the dustup with the family of fallen soldier Humayun Khan spells the end of Trump’s candidacy, he said.

In fact, said Rendell, the latest string of controversial quotes from the Republican candidate could bolster his positioning as an outsider targeted by both Democrat and Republican establishments.

“Reports of his political death are very premature because all of this stuff feeds into his narrative that has made him so popular with the angry and the frustrated,” he said. “Every time he does or says something silly, you think, ‘Well, this is it, it’s over.’ Well, I’ve said 'this is it' 10, 15 times in the last year.

But this event wasn’t about politics, at least not directly.

The fiberglass donkeys will remain on display until Aug. 23, then taken to a warehouse for a touch-up by their artists and shipped to their final homes.

Instead, it was about the fates of 57 fiberglass donkeys – representing 50 states, five territories, Washington, D.C., and Democrats Abroad – placed throughout the city this summer. (The five unclaimed donkeys represent New York, Connecticut, Guam, Puerto Rico and American Samoa.)

But they will all remain on display throughout Philadelphia until Aug. 23, at which point they’ll be taken to a warehouse in Montgomeryville, touched up by the artists who created them and shipped to their final homes.

That’s 10 days sooner than initially anticipated, but wear-and-tear has forced organizers to get them into safekeeping earlier than expected. (The California and Alabama delegations have already taken their donkeys home.)

Upkeep became more difficult with the departure of volunteer “donkey doctors” who kept them presentable at all those different locations.

Several suffered damage – mostly from children sitting on them – but there was some minor easy-to-remedy vandalism and, in one outlier case, a temporary “kidnapping” of the Guam donkey which was removed from its perch atop the Philadelphia Museum of Art steps and thrown into nearby shrubbery.

If the five yet-to-be-claimed donkeys remain as such, they’ll be auctioned off online with proceeds to be split between the 28 artists responsible for painting them.

Breaking down donkey-related numbers, the DNC Host Committee noted that more than 2,200 people participated in an app-based scavenger hunt while the “Donkeys Around Town” program produced an estimated “2.5 million impressions on Instagram and a potential reach of approximately 36.8 million people on Twitter.”

After Rendell and Angela Val – Philadelphia 2016 Host Committee deputy executive director – spoke about how the reaction to the donkeys surpassed their expectations, Mural Arts Project founder and executive director Jane Golden noted that she was initially skeptical about Rendell’s donkey-based plans. That’s not the case retrospectively.

“I love to see when art stirs up this kind of enthusiasm,” she said. Of the mishaps that befell some of the artwork, she noted that “it was strange, but very exciting.”