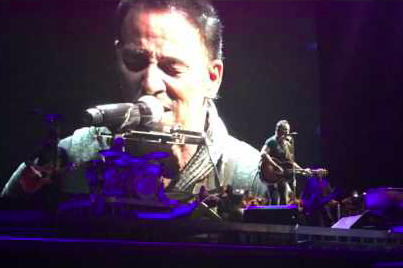 UPDATE: The challenge was leveled and the challenge was met. At MetLife Stadium on Tuesday night, Bruce Springsteen and the E Street Band played the longest U.S. concert of his multidecade career — a four-hour and one-minute affair, according to setlist.fm.

The occasion marked the finale of "The River" anniversary tour, a throwback to the legendary 1980-81 world voyage that put Springsteen on the map as an artist who will always play deep into his catalog, for hours. This year's tour — two North American legs with an intervening stretch in Europe — covered 75 scheduled shows and racked up $135 million in box office sales as of July.

The show came five minutes shy of his world record of four hours and six minutes set in Helsinki in 2012, although this certainly won't be his final chance to beat that on U.S. soil.

Check out the full 34-song setlist below and a video of the band's second encore performance of "Jersey Girl."

"Blinded by the Light"

"It's Hard to be a Saint in the City"

"Spirit in the Night"

"Working on the Highway"

"Out in the Street"

"Dancing in the Dark"

The Boss outdid himself Tuesday night at MetLife Stadium in East Rutherford, New Jersey, blasting out nearly four hours of music in what followers of the rock icon say was the longest U.S. concert of his career.

According to the fan site BackStreets, Springsteen's marathon 35-song set clocked in at 3:52:01, making it the third longest Springsteen concert ever.

Those in attendance at Tuesday's shows got their first clue with the string-accompanied opener, "New York City Serenade," which at 9:55 is Springsteen's longest song.

"The performance was excellent, having been rehearsed during soundcheck, even sublime — though still a strange choice to open a stadium homecoming show," BackStreets wrote. "It was almost akin to the acoustic pre-sets that Bruce has occasionally done as a treat for the early arrivals at shows in recent years: a bonus for the big fans that isn't part of the 'main event.'"

The longest show in Springsteen's entire career happened in 2012 in Helsinki, Finland, where The Boss, then 62, motored on for four hours and six minutes. At 66 years old, his stamina and endurance as a leading, standing musician remain unparalleled.

Here's the full setlist, with a few videos mixed in, from Tuesday night's record show:

"Something in the Night"

"The Ties That Bind"

"Spirit in the Night"

"Santa Claus is Comin' to Town"

"Out in the Street"

"You Can Look (But You Better Not Touch)"

"Death to my Hometown"

"Mansion on the Hill"

"Jack of all Trades"

"Working on a Highway"

"Land of Hope and Dreams"

"Dancing in the Dark"

Tuesday night's concert was the first of three at MetLife Stadium, including another Thursday and a third next Tuesday, Aug. 30. Will he go for the record? It's hard to imagine he wouldn't try. A man born in the U.S.A., leaving aside the intent of that song, probably wants his personal best to take place on a stage in the U.S.A. when all is said and done.