Report: Carson Wentz 'will be on the field' Week 1 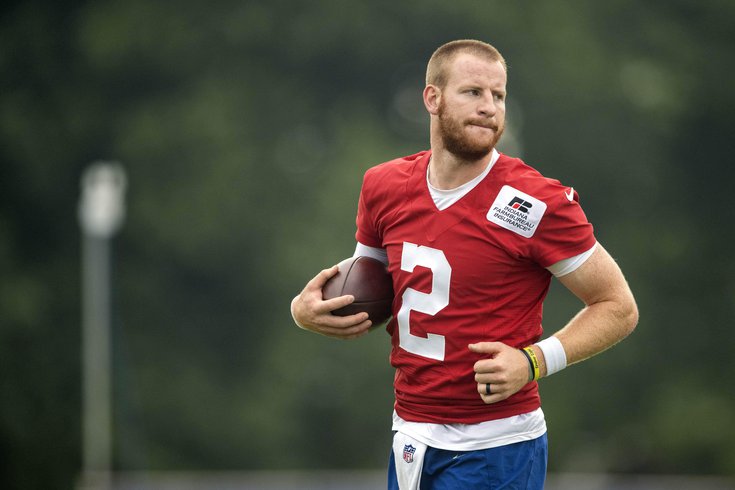 Carson Wentz will be a full participant in practice for the Indianapolis Colts on Wednesday, and according to Ian Rapoport of NFL Network, he "will be on the field Week 1."

#Colts QB Carson Wentz will be a full participant today in practice, coach Frank Reich told reporters. He’ll be on the field in Week 1. An impressive recovery.

"Will be on the field" doesn't necessarily mean "will start." We'll see soon enough.

Here is where we will make the obligatory mention that the Eagles traded Wentz to the Colts for a second-round pick that can become a first-round pick if either of the following two things occur:

As such, Wentz's full participation in practice and potential return for Week 1 is outstanding news for the Eagles.

MORE: Five (more) over/unders for the 2021 Eagles season | WTS: Jalen Hurts will be the Eagles' X-factor this season | Eagles at Falcons: Five matchups to watch

Wentz's initial timeframe for recovery after he had surgery on his foot was 5-12 weeks. If he does indeed play Week 1, he will have returned in 5 weeks.

Of course, that does not mean that Wentz's foot is 100 percent, and it could hamper him throughout the season. For a player who (a) instinctively looks to extend plays with his feet, often to a fault, and (b) already has mechanical issues stemming from shaky footwork even when healthy, being saddled by an injury such as this is a lot more damaging to a quarterback like Wentz than it would be for, say, Philip Rivers, a quick-decision pocket quarterback who played through lower body injuries for the Colts a season ago.

If you're an extreme optimist from an Eagles fan perspective, you might start to put the following formula together in your head:

There seems to be renewed hope for that scenario.