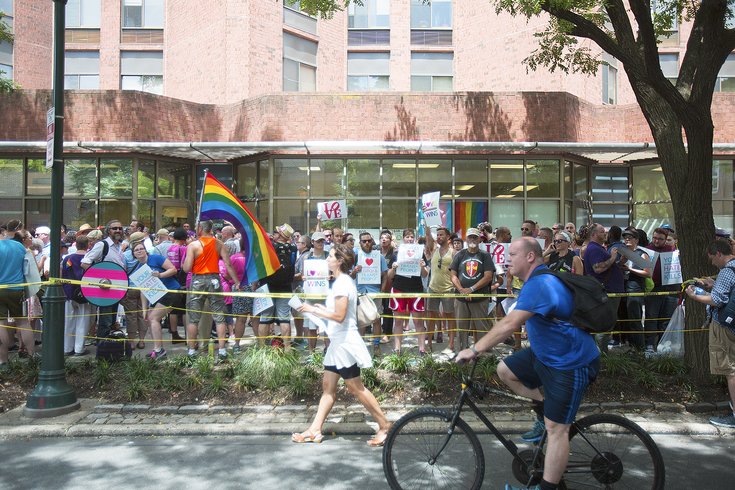 LGBTQ rights supporters counter-protested a protest by members of the Westboro Baptist Church, Tuesday, July 26, 2016, at the Mazzoni Center.

Abdul-Aliy Muhammad, a Philadelphia social justice activist and co-founder of the Black and Brown Workers Collective, is protesting the Mazzoni Center by declining to take his HIV medication, Mic reported Friday.

Muhammad, who worked at the center until 2016, told the publication that the decision comes as a message to Mazzoni, which provides healthcare to the city's LGBTQ community, along with its CEO, Nurit Shein.

The Black and Brown Workers Collective and other activists have been calling for Shein and Robert Winn, the center's medical director, to step down since January.

“I’m officially declining my HAART regimen until Nurit Shein resigns as CEO," Muhammad said in the post. "Nurit Shein has been allowed to continue power abuse and intimidation as allegations are unfolding about her knowledge of sexual misconduct by Dr. Winn. Nurit has constantly denied institutional racism within Mazzoni Center and perpetuated a culture that targeted Black and Brown staff. I will decline my life-saving medication until she steps away from Mazzoni. I do this in solidarity with the victims of Robert Winn."

The Mazzoni Center stood behind Shein during a Thursday meeting, Philly.com reported.

The center said that it is "urgently meeting individually and in groups with staff members to listen to concerns, address them and improve communication at all levels of the organization," according to the news site.

"Regrettably, many current conversations about Mazzoni Center on social media include misinformation," the Mazzoni Center said in a statement following Winn's resignation. "There is zero tolerance for anything but best practices and appropriate care at Mazzoni Center and as such any allegation or concern is evaluated and addressed in a way that is discreet and thorough to protect the rights and confidentiality of all parties – especially our patients.

Shani Akilah of the collective posted a video to the group's Facebook page Friday in support of Muhammad.