Suspect and bystander dead in chaos near 52nd and Sansom

By Kevin Shelly and Jon Tuleya

A Philadelphia police sergeant was ambushed and shot eight times by a gunman, who then shot a University of Pennsylvania police officer and four other people seemingly at random in West Philadelphia late Friday night.

The gunman, identified as Nicholas Glenn of West Philadelphia, was shot and killed by police near 48th and Sansom streets, authorities said during a press conference shortly before 2 a.m. Saturday morning.

A female bystander who was shot has died from her injuries.

The other five shooting victims were in various conditions but still alive Saturday afternoon.

Glenn, who has a history of drug charges, was arrested in a gang rape in November 2009, but the sexual assault charge against him was dropped in 2011, a police source said.

An officer who was at the scene of the firefight last night said the situation was "chaotic."

"This is a completely bizarre situation," Ross had said earlier.

The wild and horrifying incident began near 52nd and Sansom streets at about 11:15 p.m. Friday, according to Ross, when the suspect approached the patrol cruiser of Sgt. Sylvia Young and opened fire with a 9mm pistol. Ross said it's unclear where the gun came from since the serial number on the gun was "obliterated."

The man fired 18 shots at Young – two struck her in the left arm and six hit her bulletproof vest. During the Saturday afternoon press conference, Ross said that Glenn struck her service weapon, essentially disabling it and possibly leaving her unable to return fire.

He said that she's recovering at Penn Presbyterian Medical Center and was in good spirits on Saturday.

"Thank God there was not more loss of life," said Councilwoman Jannie Blackwell, who came to Penn Presbyterian around 11 a.m. Saturday. "I'm very sorry for the families and the wounded."

Blackwell represents the district where the shootings happened. The councilman said she came out to "lend support" and because of the "tragedy in my district."

Police on patrol in the area heard the shots and began pursuit of the gunman, who next approached a bar not far away and fired five shots into Maximum Level Lounge, in the 5100 block of Sansom Street.

A security guard was struck in his leg, Ross said.

The shooter then grabbed a woman, 41, from the bar and used her as a "human shield," the commissioner said. The gunman shot the woman in her right ankle before fleeing again.

Next, on 49th Street, the suspect randomly opened fire on a passing car, striking both a man and woman in the chest. The woman, 25, who was shot seven times in her torso, died from her injuries. The man is in critical condition at Penn Presbyterian Hospital, Ross said, but is expected to survive.

"Obviously, he was hellbent on hurting a lot of people," Ross said Saturday.

Near 48th Street, the gunman was firing more shots at police. Among those who had responded to the scene was Officer Eddie Miller of the University of Pennsylvania police force. 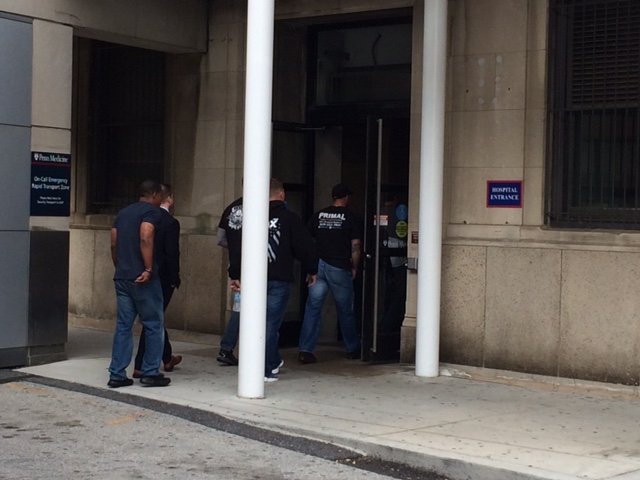 Police officers enter Penn Presbyterian Medical Center in West Philadelphia on Saturday, Sept. 17, 2016. Two police officers who were shot and wounded were being treated there after a gunman opened fire in West Philly late Friday night, hitting four others, killing a young woman.

Miller was one of the first officers to locate the shooter in an alley, said Maureen Rush, superintendent of the Penn Police Department. During a gun battle that ensued, Miller was shot in the right ankle and right pelvic area, police say. The gunman was later cornered and killed by police. He was pronounced dead at 11:47 p.m.

Miller is also being treated at Penn Presbyterian.

Police said that Glenn fired 35 rounds and had a plastic bag with 13 to 15 live rounds with him that was found after he was killed.

"He carried out one of most violent acts we've seen in Philadelphia in a long time," Ross said.

During the event a large section of West Philadelphia, from Pine to Market streets between 47th and 53rd streets, was shut down.

Philadelphia Mayor Jim Kenney visited with the injured police officers early Saturday morning, about an hour after the shootings.

Miller, 56, and a retired Philadelphia police sergeant who had served 33 years and has been with Penn's department for two years, was even cracking jokes, the mayor said. 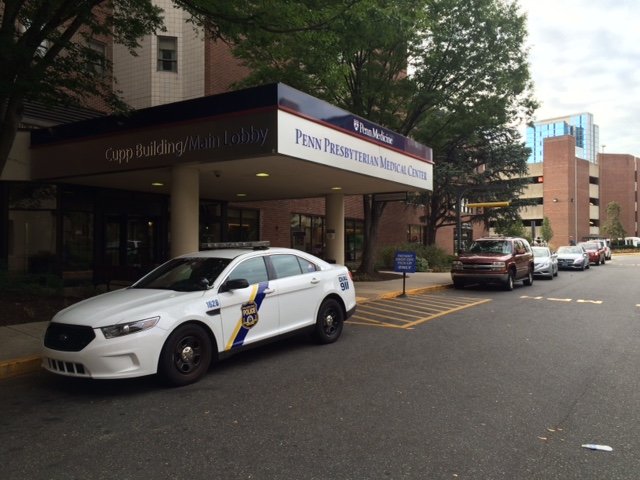 A police car is stationed outside Penn Presbyterian Medical Center in West Philadelphia on Saturday, Sept. 17, 2016. Two officers and four civilians were shot and injured by a gunman late Friday night, while the suspect was shot and killed.

Young, 46, is a 19-year veteran of the city police department and has two adult children, Ross said.

An officer who worked with Young and is friends with her visited her on Saturday. He said she is doing well, considering she was struck twice in the arm and six times in her vest.

"She was hard on me. But that made me a better officer and her a better supervisor," he added.

Young, who lives in the Northeast, was working on a special shift outside of her normal district, according to the officer. He added that leaving a note made it sound as if the gunman was intent on "suicide by cop."

Ross said the department has "no idea what sparked this. We have a lot of work to do in our investigation." 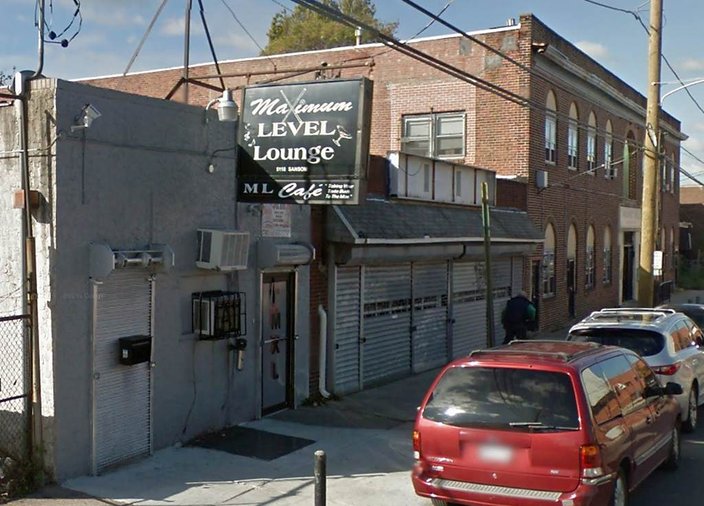 During a shooting spree on Friday night that killed a woman and injured several others, Nicholas Glynn fired shots into the Maximum Level Lounge at 5118 Sansom St. in the Walnut Hill neighborhood of West Philadelphia. He was killed by police.

Young is the second officer this year to be ambushed in a police cruiser by a gunman while on patrol in the city's 18th Police District.

On Jan. 8, Officer Jesse Hartnett was seated in a cruiser at 60th and Spruce streets when he was shot allegedly by Edward Archer, of Yeadon, Delaware County. Archer allegedly fired 13 bullets at Hartnett, who was 33 years old at the time, and four hit the cop in his left arm.

Hartnett has since recovered from his injuries, and Archer is in custody while he awaits trial. He is due in court for a hearing next month.

Ross said in the incident Friday night, the gunman did not say anything as he approached and began shooting, and Young protected herself by leaning into the passenger seat of her patrol car.

"It is a tough time in policing for a lot of reasons that you all know," Ross said. Following the shooting all Philadelphia police were ordered to patrol in pairs.

Kenney reminded all police to wear their bullet-proof vests while on the street.