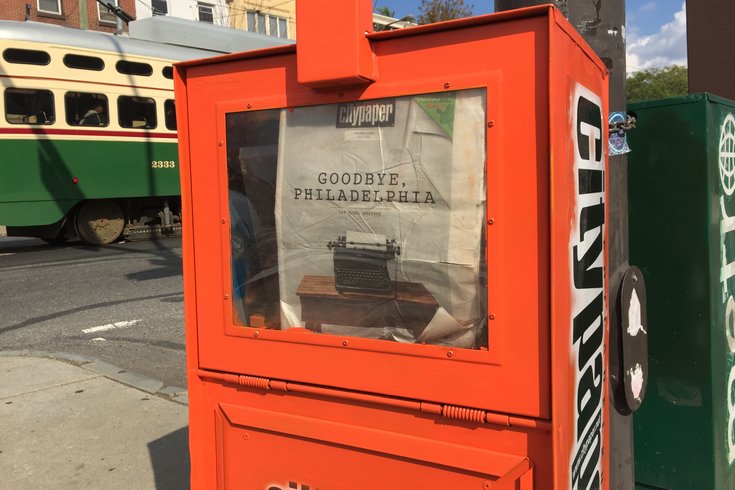 In May 2003, Philadelphia City Paper poached me from Philadelphia Weekly. It wasn’t so much an abduction or traitorous defection as it was a title/pay bump at a time when Philly’s alt-weekly wars still raged strong.

My first day on the third floor at 123 Chestnut St. was a Monday. A few minutes after arriving, the first assignment was received: Work overnight Tuesday into Wednesday; gather reports from writers out in the field covering a typically heated Philly primary; then, as the rest of the Eastern time zone slept, produce a cohesive election-day story. Got it?

What in the world – the inner-dialogue narrator asked – did I get myself into?

I've gotten myself into a situation where it’d be OK to refashion images of the lads from South Park for a “Why They Couldn’t Kill Kenney or Mariano” – get it? – cover story examining the politi-brawl between Johnny Doc and Vince Fumo and its impact on our soon-to-be mayor Jim and his then-soon-to-be-imprisoned peer Ricky.

Kids today would liken my task to ostensibly Storifying live-tweets from the polls but back then, kids (including myself) couldn’t have imagined what the Internet would soon become.

And, with all due respect to my time at PW, I’d also gotten myself into position to spend more than four years finding and developing a writing voice that has (I think) served me well for the past dozen years.

All of which is to explain why today – Thursday, Oct. 8. 2015 – feels like a #NeverForget moment akin to a friend’s deathiversary.

Nine days ago, Metro US announced it sold City Paper to the company that owns the Weekly, and that the transaction meant the 34-year-old journalistic mainstay would publish its final edition today. Current (well, now former, I guess) staffers received their execution date via company email. That’s ice cold, as was the uncertainty about what would happen with the paper's extensively excellent archives.

“Like a lobster, we were purchased to be killed and consumed,” wrote Patrick Rapa, my former co-worker who remained the paper’s music editor until today’s bon-voyage issue. “For the purposes of this metaphor, my co-workers and I are the empty red parts.”

Rapa’s parallel, while harsh, is apt in describing not just what happened to his paper, but to publications beyond.

It extends to a print-journalism industry financially neutered by a Craigslist that decimated classified-ad revenue structures and a time and age in which fewer and fewer people pick up the paper to remain apprised of the day’s issues and events. (And no, the Backpages of the world didn’t do much to help the alts with their prurient back-of-book offerings.)

Whining about cultural and corporate tides doesn’t do a thing to slow down societal evolution, though.

In that respect, its death feels like an inevitability. If it didn’t happen today, it would have happened some day sooner rather than later.

Maybe that’s why the litany of tributes from former editors, writers and staffers that have cropped up both in print and on the social-media outlets of the world feel like a deep, frustratedly accepting end-stages sigh. The same can apply to this post.

Once I wiped the sleep from my eyes after that introductory election-night experience, it quickly became evident that City Paper wasn’t a place that was going to sign the biggest free agent on the market. Rather, it sought out rough-around-the-edges upstarts and provided a springboard into professional-ish experimentation and freedom to cover what the Inquirers of the world wouldn’t dare touch.

It was nothing short of an exhilarating position.

It was the kind of place where I could write a 4,000-plus word story exploring the racial undertones of what led to the young kid who sat on my Fairmount stoop getting shot and killed.

And spend a day with a bunch of anti-war grandmothers as they went out of their way to get locked up at Broad and Race streets.

And playfully pen a superstition-fueled series about how the Eagles were going to lose each of their 16 regular-season games during a season that ended in a Super Bowl loss to the Patriots.

And introduce readers to political candidates through a series called “Cocktails with the Candidates” in which writer and candidate chatted over a variety of alcoholic beverages. (Lede: “Hello, my name's Brian, and while I'm not necessarily an alcoholic, I sure as hell felt like one on New Year's Day.”)

And edit a litany of award-winning investigative pieces about everything from under-reporting of sexual assaults on local college campuses to strains on the city’s emergency services departments.

And get a split-second cameo in an episode of “It’s Always Sunny in Philadelphia.” (Charlie and Sweet Dee tried to sell me some cocaine that had fallen off the back of a truck; I declined).

And read, after I woke up from a coma, a story that taught me many things about myself that I didn’t realize before I’d gotten nearly killed by a hit-and-run driver.

Most everybody who ever wrote for City Paper could put together a similar list of stories of which they’re most proud. That was the paper’s selling point: Letting its employees be themselves and find their way into the journalistic world on their terms.

If I was going to do so, I’d probably mention the time I’d written a Bell Curve item about a Philadelphia police detective who, after cracking a case online, was greeted by a joke about surfing Craigslist for hookers and blow. (And how that it was placed prominently on a corkboard at his or her office.)

However, the best thing I can say about the newspaper that ceased existing today is how, for more than three decades, it enriched the local journalism world with some very talented scribes, and some very important stories that, in sticking up for the little guy/gal, held powerful feet to flames.

It was vibrant. It was important. And it was necessary.

While I didn’t exactly read the paper closely in the seven years since my last day there, knowing it still existed was a soothing realization in the face of Philadelphia's journalistic contraction.

Real talk: The best career decision I ever made (writer's note: before coming to PhillyVoice last week, of course!) was opting not to walk out and try to get my job at Philly Weekly back instead of working overnight my second damn day there. Because, c'mon, can't I even unpack my boxes first?

So, goodbye, Philadelphia City Paper. Never forget that Philly is a better place because of your 34 years here.