NJTV kicks off community initiative with broadcast from Camden 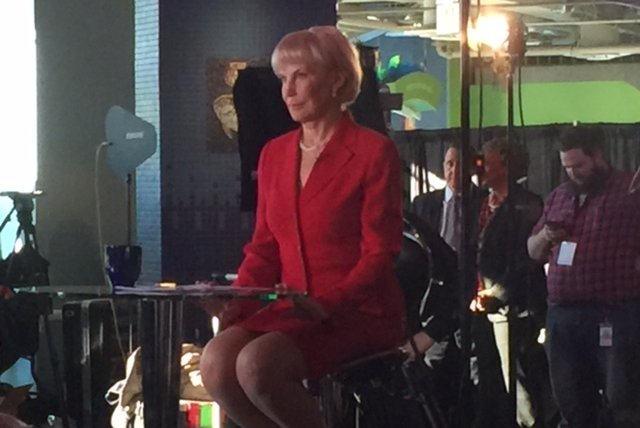 And time for public TV in New Jersey to get back to its roots as part of the "fabric of the community,” he explained.

The first stop for “In Your Neighborhood” was Camden, with a live broadcast Thursday from Adventure Aquarium that began at 5:30 p.m. with the nightly news, anchored by Mary Alice Williams.

While the half-hour news show covered the bases with state and national news tidbits, the meat of the broadcast followed as a host of locals discussed Camden issues.

Additional Camden-spiced segments followed right up until 10 p.m. You can see the whole lineup with video clips here.

Servidio said he picked Camden because “there are great stories to tell” in the city.

“We want to be more a part of the community. Hand-to-hand. That’s what public TV was. That’s what it needs to be again, today,” he said.

Anthony Perno, the leader of the Coopers Ferry Partnership, a non-profit development agency and the driving force behind many of the initiatives in the city, said he’s noticed a greater presence from the public TV network in the past year.

On the broadcast, he talked about Camden as a “vibrant community" with a story that is "not flattering."

He said NJTV seemed interested in his tale of “innovation forged out of adversity” in the city.

“I believe in a comeback story,” Perno said.

And while he’s seen a bit more interest from NJTV, "in a regular robust way, they haven’t been there,"

“This is a welcome change,” he added. “I hope this is the beginning of this conversation.”

Paymon Rouhanofard, superintendent of the state-run school district, talked about making strides in education – such as bumping the graduation rate from 49 percent to 70 percent in four years.

But he also talked about making changes to better holistically address what students deal with outside of school, such as poverty and the root causes of student absenteeism.

School nurse Sheila Colalillo was on the broadcast to discuss how nurses were working to bring down the asthma rate among city students, which is about double the statewide average. A number of nurses, including Renee Wickersty, were in the audience as support.

Wickersty admitted she does not routinely watch the broadcast, but she said she felt it was important to show that “Camden is turning around, and on the uptick.”

Servidio said next up in the traveling series is a stop in Trenton in early June, followed by New Brunswick, then Atlantic City or Asbury Park.