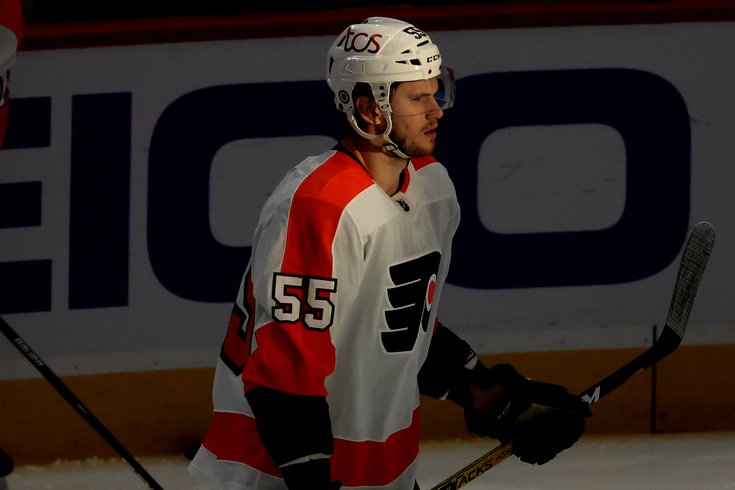 Knee injuries forced former Flyers defenseman Samuel Morin into retirement, but he is proud of the career he has had.

Samuel Morin doesn't know what he'll do next, but he knows for sure that it will still be in hockey.

Once a top prospect within the Flyers' system, general manager Chuck Fletcher revealed Tuesday that Morin's playing career was over.

The 6'6" defenseman had been struggling with knee injuries the past few years. Issues from them mounted and reached a point where he couldn't come back.

"This year, when I got hurt again before training camp, I knew it was pretty bad," the 26-year old told the media in a Zoom call on Thursday. "I was telling myself it was going to be fine, but around Christmas, I saw a doctor in New York and he told me to shut it down.

"My knee was really in bad condition, and...that's what it is."

It took time to accept, Morin said. But now that a few months have passed, he feels way better about the career he just turned in. There are no regrets.

Watch live as Flyers defenseman @sammorin55 meets with the media to discuss his retirement from the NHL. https://t.co/E5QQkycWIo

The Flyers, still under Paul Holmgren's regime at the time, selected Morin 11th overall in the 2013 NHL Draft.

He was a big, physical defenseman coming out of the QMJHL, but was also considered a project — most d-men of that build and style of game are.

His development was coming along though, progressing through one more year in juniors then to Lehigh Valley in the AHL, along with a handful of NHL games over the next several years.

But trouble struck in the 2017-18 season. Injuries held Morin to just 15 games for the Lehigh Valley Phantoms, and when he returned to try and help them in the Calder Cup Playoffs, he tore the ACL in his right knee.

The road to recovery was long.

The road got longer, even more draining physically and mentally, made even worse because of the restrictions the coronavirus pandemic put on both the NHL schedule and his ability to go home to Quebec.

"I was away from family all this time with COVID and all that stuff, so I'm back home right now," Morin said. "It's been really good to see my parents, my little sister, and my friends...I really missed my family during those years.

"It was a long time...With COVID, I was in Philly because I needed to be in Philly to workout because Quebec was so shut down."

He was also faced with having to change positions ahead of the condensed 2021 season. In a last ditched effort to save his career, as the Flyers had no room for him on the blueline to start, Morin was asked to switch to left wing.

By then, doubt was creeping in for Morin, the pain was taking its toll. He didn't know how much longer he could go.

But his family, who he credited heavily on Thursday for why he went as far as he did, encouraged him to keep going.

"I remember a couple times when [the Flyers] told me I was going to be a forward — I mean, I accepted it because obviously, I needed an opportunity to play — but I was like 'Oh my God, what am I going to do?'" Morin recalled. "Sometimes I just wanted to quit everything. I was like 'Man, this is not me. I want to be a d-man,' but my family was like 'just stay right with it, keep doing what you're doing.'"

Morin went on to play 20 games for the Flyers in 2021, and became loved in the locker room as a constant source of upbeat energy, despite all he had been through.

On March 27, at home against the Rangers, Morin scored his first NHL goal. It was huge.

"It's the best moment of my life," he said afterward. "It's been a hard couple of years for me."

"I think that's why everybody is so happy," now former teammate Travis Konecny said back then of Morin. "When you work so hard, and guys can see it, and you bring his energy every day, no matter if he is in the lineup or not in the lineup, it's something special and it just rubs off on the guys and we're so happy for him."


Now that he is back home in Quebec, Morin said he is going to take his time and analyze what his options are for what he wants to do next over the summer.

He did have talks with Fletcher about possible opportunities with the Flyers, and said he has also spoken with former Flyers defenseman Marc-André Bourdon — a fellow Quebec native who transitioned into coaching and then a general manager role with the QMJHL's Rouyn-Noranda Huskies after his playing career was cut short by concussions.

Morin's going to miss playing and all that came with it, but said he'll tackle his next role with the same approach he had back when he was an NHL hopeful, whatever it may be.

"I think in life, sometimes stuff happens and you just keep moving forward," Morin said. "I'm young, I'm going to be 27 soon, I have so much going moving forward for me. I'm looking forward to it.

"I want stay in hockey. I know it for sure. I love it, and I think I can — like I did in the NHL — I think I can climb the ranks. That's my goal. I want to have the same [attitude] I did when I was a little kid. I want to play in the NHL, I want to graduate the ranks and someday be a higher up in those ranks."