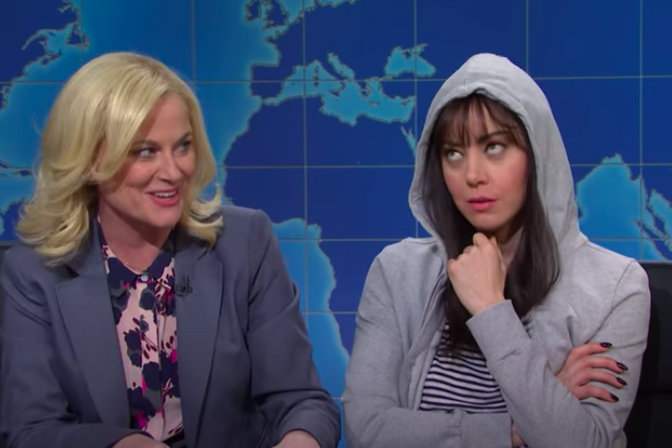 "Parks and Recreation" fans got to return to the fictional town of Pawnee thanks to a "Saturday Night Live" sketch that reunited two stars of the sitcom.

Weekend Update host Colin Jost was discussing a recent study's findings that local governments are struggling to hire new employees, when Plaza and Poehler joined him in character to offer tips. "Parks and Rec," which ran on NBC from 2009 to 2015, centers on the staff of a small Indiana town's parks and recreation department.

"Work for the water department," Plaza said. "You can drain the reservoir and find all the bodies and murder clues. Or just be a dog catcher and just say you couldn't find any. Because when you work for the local government, doing the bare minimum is doing your part."

Poehler, who was once the Weekend Update host, was more interested in finding out about Jost's job.

"How much fun is it working here? Do you guys just sit around cracking each other up all day?" Poehler asked.

She then asked Jost if she could try to tell a joke, and after passing on some "too mean" options she joked about a bus service for puppies in Alaska.

This wasn't the only segment during which Plaza took a trip down memory lane. During her monologue, she discussed her time working in NBCUniversal's page program, donning the signature jacket and taking viewers on a behind-the-scenes tour. Poehler popped up during the tour, to roaring applause from the audience.

Plaza also noted the time she had been voted Delaware's most famous person in a 2018 poll, beating out Joe Biden who sent a pre-recorded message for the star.

"Aubrey, you're the most famous person out of Delaware, and there's no question about that," Biden said. "We're just grateful you made it out of 'White Lotus' alive."

The episode was full of timely skits, including parodies of "The White Lotus" (Plaza starred in its second season), "Avatar" and "M3GAN." Sam Smith was the musical guest.

SNL's next episode will air Saturday, Jan. 28, with "Creed" star Michael B. Jordan hosting and Lil Baby as the musical guest.