Liam Ryan, of Barnegat Light, has earned social media fame with the videos posted by his granddaughter, Grace Pettit 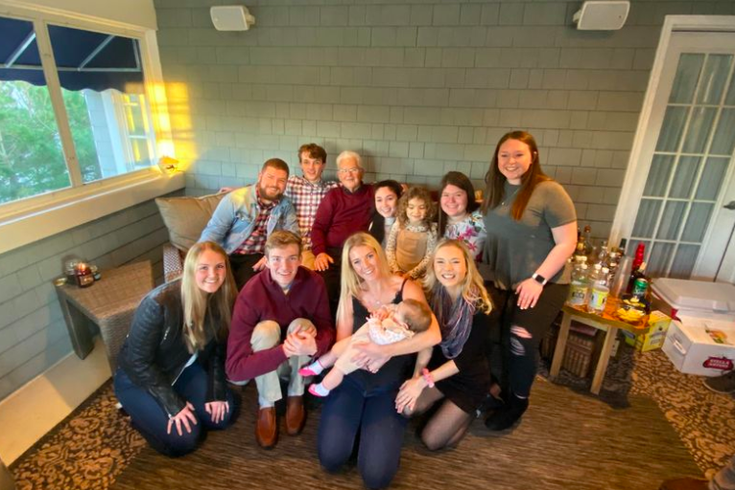 Liam Ryan, a Long Beach Island resident affectionately known as 'Gramps' to his grandchildren, went viral on TikTok thanks to videos posted by his granddaughter, Grace Pettit. Ryan, in the center of the back row, is pictured above with his 11 grandchildren.

It's never too late to become a social media sensation, as one South Jersey grandfather recently found out.

Liam Ryan, a Barnegat Light resident, stars in two TikTok videos that have been viewed millions of times during the past few weeks: In one he shows off his outfit of the day, and in the second he gives unique Christmas presents to his grandchildren. The videos were posted to the social media platform by his granddaughter, Grace Pettit, a Rutgers University alumna from Westfield, Union County.

"He's very thankful for all the support and everything, we both are," Pettit said this week from Hawaii where she teaches second grade. "We obviously didn't expect this to happen, but we're happy we can make people smile."

Pettit had visited Barnegat Light for the holidays. It's also where she spends her summers staying with Ryan, who she affectionately refers to as "Gramps." The pair had been relaxing after a night of holiday parties when Pettit asked Ryan to make a TikTok.

"He's made a few (TikToks) before with my brothers because he likes to dance," Pettit said. "So we'll do dances with him."

This time, Pettit asked her grandfather if he'd do a "fit check," the trend in which TikTokkers show off what they are wearing, providing details about where each piece of clothing is from. While Ryan didn't exactly understand the concept of the video – since most of his outfit was gifted to him, he explained who had given the clothes to him rather than share the names on the labels — the duo proceeded to show off their looks.

He shows off his jeans, plaid shirt and cardigan sweater, before descending into a giggling fit with Pettit about how to best display his sneakers, which were out of the video's frame. He also notes that his glasses are from the doctor. Pettit then takes a turn, describing her pants from Athleta, Rutgers sweatshirt and Adidas socks.

"It blew up out of nowhere, which was completely surprising," Pettit said. "He actually told me not to post it ... And I posted it anyway because I thought it was so funny. Then, a few days later I called him and told him, 'Gramps, people have been seeing it.' He's like, 'What are you talking about?' and he just thought it was hilarious."

The video, posted Dec. 18, has 1.9 million views as of Wednesday, along with over 340,000 likes and 7,000 comments. Among them, Gramps' new fans on TikTok expressed desires to see his outfits every day, commented how "precious" he is, and some wrote that the video made them miss their own grandfathers.

Pettit and Ryan continued their viral streak with another video posted on Jan. 2 that showed Ryan handing out Christmas presents to his 11 grandchildren.

The family members cheer as they unwrap their gifts to reveal pairs of Crocs. He then hands out a second round of presents — charms, or Jibbitz, for their new Crocs, each with a photo of his face (wearing a serious expression) on it.

"It's Gramps!" one of them exclaims. The video ends with the grandchildren wearing their Crocs, each embellished with a "Gramps" Crocs charm. Pettit and Ryan had worked together to choose the gifts and get the custom charms made by an Etsy user, which is how she knew to film the moment. The Crocs, while a quirky gift, have sentimental value for the family.

"My grandma used to wear Crocs all the time," Pettit said. "My Granny, she would always wear bright teal Crocs with a blue, matching cover up. She passed away in 2012."

The TikTok post of Gramps' Christmas gifts garnered even more attention than his first viral video, amassing with 3.9 million views, more than 815,000 likes and 13,000 comments. Even the official Crocs TikTok account commented, "Okay, now this is how you win Christmas!"

Ryan's social media fame is translating into real life fame, at least in his tiny Jersey Shore town. Pettit said people have recognized Ryan in the post office and at the supermarket.

With Pettit back in Hawaii for the spring, she said she may ask her grandfather's brother, who lives on a nearby island, to join her in some TikTok videos. She also still has unpublished videos of Gramps that she may share, although with all of the new eyes on her account, Ryan now requests that Pettit ask his permission before posting.

While Ryan may or may not star in future TikToks, he does want all of his new social media fans to know one thing.

"You know, he just doesn't like being called an old man," Pettit said. "He's like, 'I'm young.' He went skydiving last year to show all of us that he's still young."