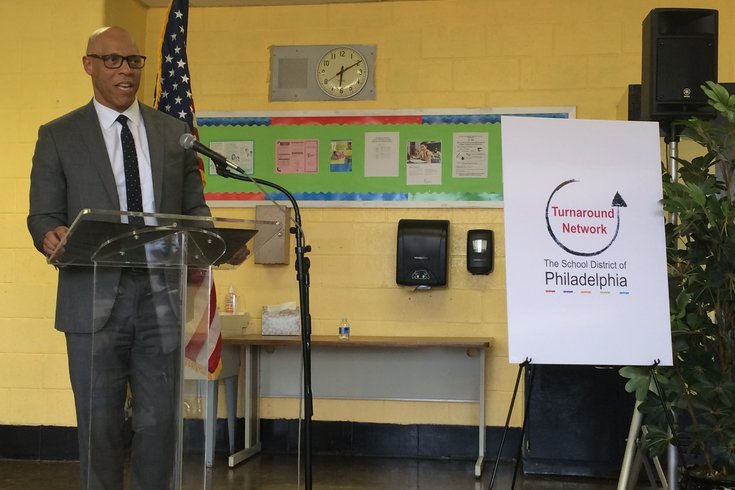 William R. Hite, superintendent of the Philadelphia School District, announces a new turnaround program for the city's schools on Thursday.

In a visit to Martin Luther King High School in the city's West Oak Lane neighborhood, Superintendent William R. Hite said the district would use about $16.5 million in current and redirected funding, mixed with an influx of about $7.2 million in new funding, to finance the plan.

The district is relying on approval of Governor Tom Wolf's 2016 spending plan – which would increase school funding by $350 million – and on new funding from the 2017 state budget as well.

"Our survival is contingent on what happens in Harrisburg," said Hite on Thursday. "A lot of things have to fall into place."

As designed, the new turnaround schools model would focus on 15 schools with what Hite called "chronically low academic performance" in an effort to improve learning opportunities for students at those schools.

The district has made an effort in past years to improve underperforming schools, including a Renaissance Schools initiative in 2010, through which some of the district's schools became Promise Academies and others became Renaissance Charters.

Eleven of the original Promise Academies will be included in the new turnaround model, and four other schools will be added. Cayuga Elementary School, currently a Promise Academy, will be removed from the turnaround plan, as a result of improved student performance, Hite said.

The schools continuing in turnaround efforts are:

Starting in the fall, leaders will be identified in each school, with three-week instruction cycles implemented to continually assess progress, Hite said. Teachers in the schools will be given opportunities to grow professionally with coaching and collaborative planning.

Hite also noted that, once the program is up and running, the district will endeavor to bring school nurses and counselors to every school.

This element of the plan was praised by Jennifer Clarke, executive director of the Public Interest Law Center, who said a lack of school nurses and counselors leads to "increased school absences, unmet medical needs and trips to the emergency room."

"To the extent Dr. Hite’s announcement becomes reality, the school district will save itself from costly, protracted litigation, and instead expend its scarce resources where they belong: on our children," she said in a statement after Hite's address.

But several principals in attendance offered mixed reactions to the new plan. One important element of the proposal would require schools in the program to participate in a 50-percent transfer process, which requires the principal and teachers to re-apply for their jobs. No more than 50 percent of any school's staff could be retained.

Those not accepted back at their school would be moved to other schools.

Schools providing "a compelling reason" to keep more than 50 percent of its staff, might be able to do so, Hite said.

Dywonne P. Davis-Harris, principal of Potter-Thomas Elementary School, said the 50-percent transfer process worked well at her school when it was made a Promise Academy several years ago.

"It was worth it," she said, noting the school retained about 10 percent of its employees. "It worked very well for us."

Davis-Harris's staff would not be required to undergo the transfer process again.

But Ximena Carreno, principal of Munoz-Martin Elementary School, said she was wary of the transfer process. She said her staff has rallied together since it pushed back on efforts to make it a Renaissance Charter school.

Upon learning that the school would be part of the new turnaround model, Munoz-Martin teachers were "disappointed" that they would have to re-apply for their jobs, she said.

"When we received the news, they were very disappointed," she said. "I feel like we are losing again."

Overall, Hite said the turnaround model is intended not to punish teachers and principals, but to find a way to provide a better education to the city's schoolchildren.

"At the end of the day, are our children learning to read? Are they learning to do math?" Hite asked the gathered crowd. "We have to be able to stand up and say 'yes'."