Commuters on several SEPTA Regional Rail lines will have to make adjustments during a two-week stretch in August as workers complete projects to improve aging infrastructure and ensure passenger safety.

The Southwest Connection Improvement Program, whose first phase runs from Aug. 4 to 19, will cover maintenance projects impacting all lines at University City Station in Southwest Philadelphia and select service on the Media/Elwyn, Wilmington/Newark and Airport lines.

Some of the infrastructure involved in the program dates back to the 19th century, while other portions stretch back to the 1940s.

Most of the work will be to rebuild mainline infrastructure on the Media/Elwyn Line between 30th Street Station and Arsenal Interlocking, just below University City Station. These tracks also serve the Wilmington/Newark and Airport lines.

Several interlockings will be reconfigured and replaced in order to enable faster speeds for trains passing through them. Other projects will upgrade and repair retaining walls, repair drainage structures, replace the overhead contact system and clean debris from the track areas. 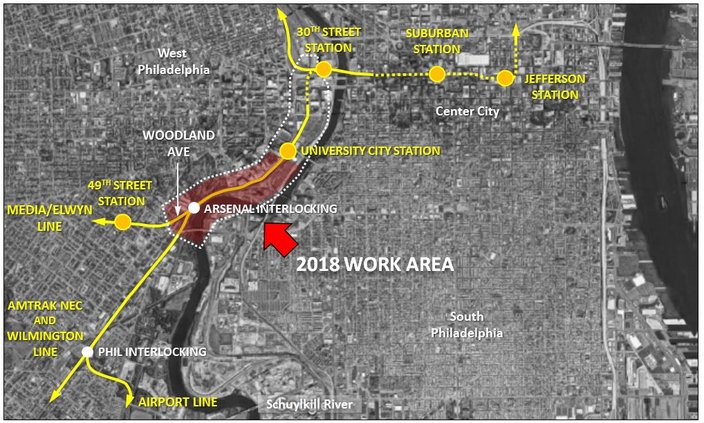 The work scheduled for August includes the following, according to SEPTA:

•Communication and signals prep work (for later phases of the project)

"While SEPTA has a rigorous inspection and maintenance program, the last significant capital investment in this area was made by Conrail and Amtrak in the mid-1980s, in advance of the opening of the Airport Line, and the infrastructure continues to age," SEPTA explained in a description of the project.

More information on the program, including alternate service options, can be found here.