Seth Joyner, Clyde Simmons to be inducted into Eagles Hall of Fame

The team announced the newest members at halftime on Thursday

By Adam Hermann
PhillyVoice Staff
Eagles Hall of Fame
from 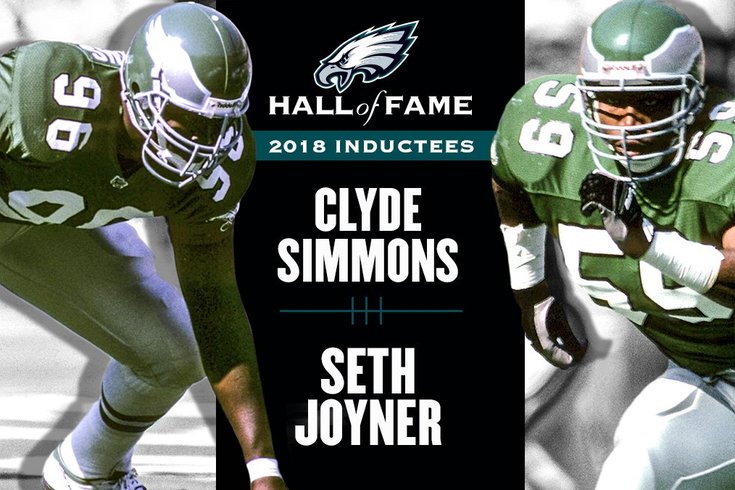 Seth Joyner and Clyde Simmons will be inducted as the newest members of the Eagles' Hall of Fame on September 23, when the Birds host the Indianapolis Colts. The Eagles made the announcement Thursday during halftime of the team’s first preseason game.

Joyner played linebacker for eight seasons in Philadelphia, from 1986 to 1993. He was named All-Pro three times and made two Pro Bowls. He’s the only player in Eagles history to record at least 35 sacks and 15 interceptions, and one of just two players in Eagles history with 20 forced fumbles.

“Seth Joyner was one of the most talented and fearless outside linebackers of his era, and the way he committed his heart and soul on every play spoke volumes about his love for the game,” Jeffrey Lurie said in a release from the team.

Simmons also played defensive end for eight years in Philadelphia, and also played from 1986 to 1993. He was named All-Pro twice and made two Pro Bowls. He ranks third in Eagles history in sacks with 76.0, behind just Trent Cole (85.5) and Reggie White (124.0).

“Clyde Simmons was one of the most feared pass rushers ever to play in Philadelphia, but he was also ferocious against the run and made his presence felt each and every week in the trenches,” Lurie said.

Here’s a little social media clip the Eagles put together about the two legendary Birds players:

Congratulations to Clyde Simmons and Seth Joyner, who will be inducted into the #EaglesHOF on September 23rd!#FlyEaglesFly pic.twitter.com/UGu1bgtwpC

David Akers was the team's lone inductee last year. Joyner and Simmons will be the 45th and 46th individual members of the Eagles Hall of Fame. Players are considered for induction three years after their retirement from the NFL.