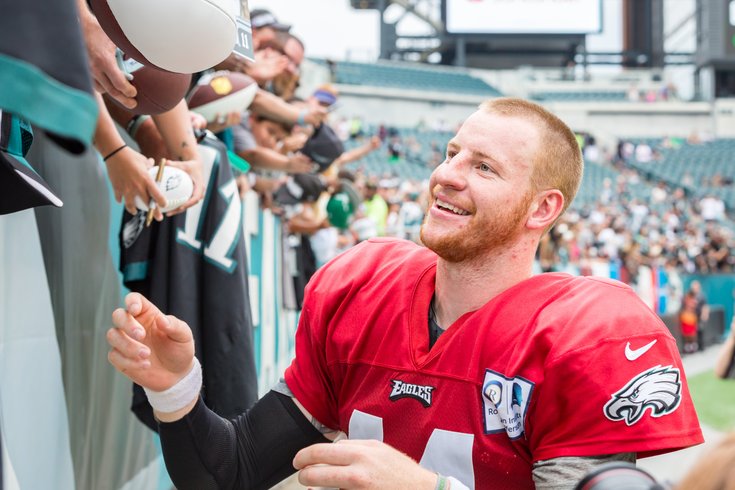 With the Philadelphia Eagles just 10 days away from kicking off the 2018 regular season against the Falcons at Lincoln Financial Field, ESPN has released its rankings of the top 100 players in the NFL — and the reigning world champs are well represented.

In all, the Eagles had seven players make the list, tied with the Vikings for the most in the NFL. And of those seven players, six are newcomers to the list. Talk about a Super Bowl bump.

The highest-ranked player was quarterback Carson Wentz, who, at 17th overall, was the fourth-highest QB on the list behind Aaron Rodgers (1), Tom Brady (2) and Drew Brees (6). Other quarterbacks ranked near Wentz include Ben Roethlisberger (18), Russell Wilson (19), and Matt Ryan (21).

Wentz finished second in the NFL with 33 touchdown passes last season, and ha was while missing three-plus games to end the season. He's still on the mend from a torn ACL and LCL, but he will recapture the magic before long.  [espn.com]

The only Eagles player making a return to the Top 100 is defensive tackle Fletcher Cox, who comes in at 29th, 28 spots better than a year ago. Only the Rams' Aaron Donald was ranked ahead of Cox in terms of interior defensive lineman. Gerald McCoy (46) was the only other to crack the Top 50.

Cox flies under the radar because of the position the plays, but he is a menace along het interior and one of the league's best defenders. He had 36 quarterback pressures for the Super Bowl champs last season.  [espn.com]

When Johnson plays, he is dominant. Suspensions aside, he might be the best right tackle in football. Just ask Carson Wentz. Over the past two seasons, the Eagles are 17-4 when he is in the lineup — and 3-8 when he's not.  [espn.com]

Here's a look at the other Eagles players to crack the top 100, all four of whom happen to be newcomers to the list (the number in parentheses indicates their positional ranking)...

So how did ESPN come up with their top 100 players?

We asked a panel of ESPN NFL experts to rate players based on how good they will be in 2018, using a scale from 0-100. We asked them to not emphasize past performance or positional value -- only greatness this season. We then averaged their ratings to create the top 100.  [espn.com]

In case you're wondering how the rest of the NFC East fared, the Cowboys had five players in Top 100 (led by Ezekiel Elliott at No. 15), while the Giants and Redskins had three each.