Gov. Wolf says project will create up to 3,700 new jobs; final selection and construction expected to start by 2017

By Sharon Lurye
PhillyVoice Contributor
Business Port of Philadelphia
from 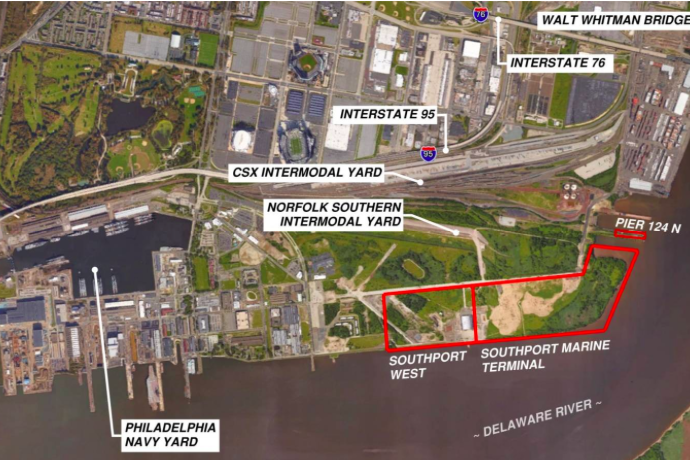 A bird's-eye view of the Southport Terminal, site of a proposed development in the Port of Philadelphia.

The first major expansion of the Port of Philadelphia in more than 40 years is one step closer to becoming reality, as the Philadelphia Regional Port Authority released a shortlist of six potential developers on Wednesday.

The six firms all bring different proposals on how to bring industrial and commercial business to an undeveloped, 196-acre site on a southern bend of the Delaware River. Gov. Tom Wolf has promised that the public-private project will create up to 3,700 new jobs, though plans for what exactly will be built on the site remain up in the air.

The site, known as the Southport Terminal, is broken into three parts: the 119-acre Marine Terminal, the 75-acre West Terminal and, optionally, Pier 124. Not every developer submitted plans for all three sites. Here's a rundown of each of the developers and what they're proposing, according to a Port Authority presentation:

Who they are: a Chicago-based real estate investment trust (REIT) and the largest industrial property company in their area

What sites they'll use: all three parts

Proposal: develop warehousing and facilities for roll-on/roll-off ships and other cargo. They may also include a local seafood distribution plant.

Who they are: partnership of Ullico Infrastructure Master Fund and Liberty Energy Trust of Conshohocken, the company that attempted to acquire Philadelphia Gas Works (PGW) in 2014

What sites they'll use: only the Marine Terminal

Proposal: develop a port with the capacity to hold 500,000 standard 20-foot-long containers

Who they are: an $8 billion REIT in Malvern, known for projects like the Comcast Center, the Navy Yard and the $1 billion Camden Waterfront plan.

What sites they'll use: West Terminal, possibly the pier as well, but no details were provided

Who they are: owners of the Girard Point and Point Breeze refineries in South Philly, the largest oil refining complex on the East Coast.

What sites they'll use: the Marine and West terminals

Proposal: create an import/export facility for crude and refined oil, with pipes connected to the PES refinery. It will include six tanks for storing crude and four tanks for storing gas and diesel, each large enough to hold 250,000 barrels. Whatever space remains can be used for non-energy-related cargo.

Who they are: a partnership of Spanish group OHL Infrastructure, Morgan Stanley and Penn City Investments

What sites they'll use: all three parts

Proposal: dredge up to three berths and build a port with capacity for 1 million containers (starting gradually with capacity for 376,000 containers in Phase 1). They'll also build a 35-acre energy park, facilities for roll-on/roll-off ships and auto storage for up to 9,000 cars.

Who they are: Texas-based infrastructure company

What sites they'll use: the West Terminal and the pier

Proposal: development of auto storage, processing and storage facilities for bulk products, as well as facilities related to energy/fertilizer products

The Port Authority sent out a request for qualifications this September and got seven responses. Only one applicant didn't make it on the shortlist — a group called "World Trade Center," which had plans for retail and office space rather than industrial development.

Candidates are expected to submit more detailed proposals by this summer. The Port Authority expects to pick a developer and start construction by 2017.