During his senior year at Boston University, Brett Brown experienced a true tragedy when, on Sept. 17, 1982, his teammate Arturo Brown -- together, they were known as the "Brown Brothers" -- collapsed on the court during practice and later died at an area hospital. Now the coach of the Philadelphia 76ers, Brown still draws inspiration from his late "brother" and hasn't forgotten the important lesson Arturo's death almost 35 years ago taught him.

Sixers coach Brett Brown asked that five minutes be placed on the clock in the team’s practice facility one night last week. Just five. That was the amount of time he promised to give himself to answer each question from the coaches attending the clinic he was about to run.

Some 550 of them were on hand – young and old, male and female, rec league and youth league, high school and college. And now they were seated on folding chairs ringing one of the courts in the building as he stood before them, feigning surprise at the turnout.

That drew the expected laughter, and then the man who presided over a 10-72 team last year, who has gone 47-199 in three seasons of coaching “basketball gypsies” (as he once described many of his players), was off and talking.

That was the first death that I experienced. It just changes the way you view the world. The reality of death makes you see things and think about things very differently.

For over 90 minutes, the 55-year-old Brown, who begins a new season Wednesday, discussed things like transition defense and how to deal with difficult players. (“You trade ’em,” he said, again playing the room for laughs.) He talked about defending bigger teams and observed, “If you give me a choice between size and speed, I’ll take speed every time” – an interesting admission from the coach of a club with an overcrowded frontcourt.

He also mentioned things from “his previous life,” as he likes to call it – how, for instance, he played for or coached under four Hall of Fame coaches, an apparent attempt to remind one and all of his bona fides.

In time, everybody packed up and went home, taking with them a handout that included a 30-year-old quote attributed to a securities analyst named Dan Montano. Every morning in Africa, he said, the lion and the gazelle must hit the ground running, for if the gazelle does not it will be eaten, and if the lion does not it will starve to death.

The point being that no matter who you are, “When the sun comes up, you’d better be running.”

The bigger point, as Brown learned most pointedly one afternoon 34 years ago, is that the clock is always ticking down. On all of us.

“We were each other’s best friend.”

In the fall of 1982, Brett Brown was headed into his senior year at Boston University, where he played point guard for one of those Hall of Famers, Rick Pitino. Before that, Brown played for his dad, Bob, at South Portland (Me.) High School.

The elder Brown, who is in five Halls of Fame in New England, was a taskmaster, a guy who made everyone toe the line – his son most of all. Brett Brown once recalled that he would reserve his dissent for family dinners, that there were times he would ask his dad, “What are you going to do, suspend me from the dinner table?”

Pitino was no day at the beach, either. On the first day he met with Brown and his fellow freshmen in 1979, he asked if everyone had a watch, and said he would buy one for those who didn’t. Then he urged all of them to set those watches 15 minutes ahead, a ploy that dates at least to the days of Vince Lombardi. The idea was to be early for every team function.

“If you’re 14 minutes early, that means you’re one minute late,” Pitino told them. "And you will regret the day you were born.”

There were six recruits Brown’s freshman year. Four of them transferred at one point or another prior to the '82 season.

Besides Brown, the other survivor was Arturo Brown, who came to BU from Panama via Brooklyn. A silky smooth 6-5 forward, Arturo only began playing basketball in eighth grade but developed quickly, and was soon one of the Terriers’ best players.

He and Brett also drew close; someone took to calling them the “Brown Brothers,” even though Arturo, unlike his teammate with the same last name, was African-American. In truth, though, the entire team was unusually tight according to Shawn Teague, a guard who was one year behind the Browns.

“We were each other’s best friend,” said Teague, whose son Jeff is in his first year with the Indiana Pacers after seven with Atlanta (and whose younger son, Marquis, now plays overseas after spending two seasons in the NBA; the Sixers briefly held his rights in 2014, though he never played for the team).

All the BU players seemed to room with each other at one time or another, the elder Teague recalled over the phone last week from Indianapolis, where he runs the family’s foundation and oversees a basketball facility. And Brett Brown served as co-captain his last two seasons, keeping things light when Pitino, who was in his first coaching stop, rode everyone ragged.

“He was fun-loving,” Teague said of Brown. “He did a lot of, I would say, crazy things – just kind of funny, just kind of wild.”

The only example he offered was rather tame. He said Brett Brown showed up in the locker room one day wearing a spiffy suit, saying he had to interview for a job. Everybody was suitably impressed until he unbuttoned the jacket and revealed a shredded lining, cracking his teammates up.

“I forgot about that one,” Brown said the other day.

Everyone seemed to gravitate to Arturo as well. There was just something disarming about him, something about his bearing that drew others in. Maybe it was his “gentle puppy-dog-eye look,” said Bill Burke, who coached him for a year at Brooklyn’s Nazareth High and was Pitino’s assistant the first two years the Brown Brothers played at BU.

Or maybe, Burke said, it was his smile.

“He could just relate to anyone,” said Teague, who roomed with Arturo as much as anyone.

It didn’t matter if they played for the team or not. Didn’t matter what their background might have been.

“He was just a good person, and made you feel like, you know what, you’re my No. 1 friend in this world,” Teague said. “That’s how he made everybody feel, so that was real impactful to me.”

“You could tell in his eyes that something was wrong.”

The afternoon of Sept. 17, 1982, the Terriers held a captains’ practice in the Case Center – i.e., a players-only workout necessitated by NCAA rules that prohibit coaches from overseeing drills at that point in the school year. The Terriers did some conditioning work, then played pickup.

At one point Arturo collided with a teammate while battling for a rebound, and was knocked to the floor. He tried to stand, then fell again as the others rushed to his side.

“You could tell in his eyes,” Brett Brown said, “that something was wrong.”

He was taken to the hospital, to no avail. The cause of death was heart failure, the result of an enlarged heart. He was just 21.

Brett Brown wandered the streets of Boston for hours afterward, trying to make sense of it all.

“That was the first death that I experienced,” he said. “It just changes the way you view the world. The reality of death makes you see things and think about things very differently … The whole experience, obviously, when you’re that young and it’s a teammate, is just very surreal. It bumps you around a lot.”

There was a funeral back in Brooklyn, then a season to play, a season that very much included Arturo.

“We put that out there on the line: ‘This is our brother in the sky. We’re right there with him, and he’s right here with us,'" Teague said. “That was the driving force, no question about that.”

The Terriers wound up going 21-10 and reaching NCAAs for the first time since 1959. And afterward Arturo’s No. 44 was retired, his memory forever retained. 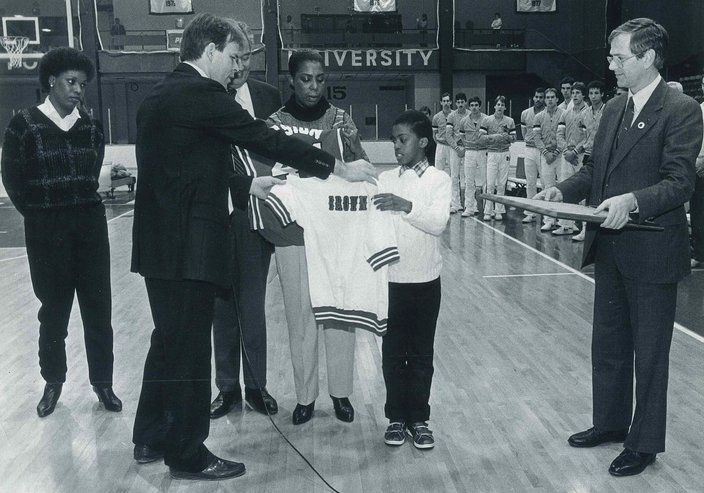 Arturo Brown's family during a ceremony at Boston University following his passing in 1982.

A year later, Brett Brown went on a backpacking trip to New Zealand and Australia.

What began as a months-long adventure turned into a 17-year stay. He would meet the woman who would become his wife, and settle on the coaching track, as Teague, Burke and others suspected he would.

Brown started out working under another Hall of Famer, Lindsay Gaze – “the Pete Carril of Australia,” as the Sixers’ boss described him – and, in time, coached the national team in three Olympics. Then it was on to San Antonio, where he was part of Gregg Popovich’s staff for 12 years, a span in which the Spurs won the first four of their five NBA championships.

All in a previous life, though.

The clock continues to tick down. Brown knows that as well as anybody.