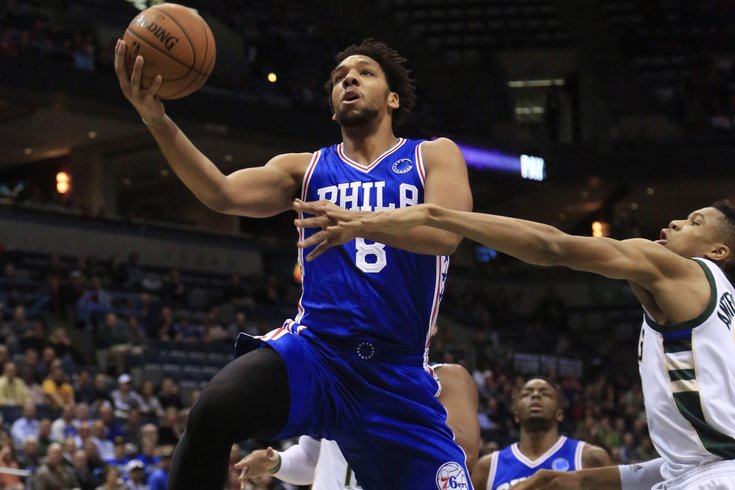 It was Jabari Parker's season debut for Milwaukee, but it was another former Duke Blue Devil that stole the show in Wednesday night's game between the Philadelphia 76ers and the Bucks.

No, not Miles Plumlee.

Rookie Jahlil Okafor looked sharp, finishing with 21 points, while Parker finished with just two points in sixteen minutes. Without Robert Covington -- he didn't make the trip after re-injuring his knee -- the Sixers also got a boost from rookie T.J. McConnell, who made his case to be the Sixers starting point guard, and Nerlens Noel, who finished with a double-double (17 points, 12 rebounds).

Still, it was not enough for the Sixers (0-4) to pick up their first win of the season, ultimately falling late to the Bucks, 91-87.

Here's what I saw from the Sixers in the loss, including more on Okafor, McConnell and, of course, Sauce Castillo.

•    The Bucks tried double teaming Jahlil Okafor in the post, but without much success. Okafor finished with 21 points on 9-of-13 shooting to go with six rebounds. He also showed what he's able to do running the floor.

•    T.J. McConnell should be the starting point guard going forward. Not only did he have a great all-around game (7 points, 12 assists, 9 rebounds, 1 TO), but the Sixers offense just ran so much more smoothly with him running the point instead of Isaiah Canaan. And the +/- numbers reflect that. The team was plus-four in scoring during McConnell's 34:33 compared to minus-16 in just 15 minutes with Canaan on the floor.

McConnell also passed the eye test. First off, the Sixers spacing was much better, due in large part to his ability to get into the lane while maintaining his dribble. It often seems like Canaan either goes to the basket or picks his dribble up near the elbow. That eliminates any chance at creating open looks like this:

McConnell -- making his first NBA start -- also made a few nice lead passes to start the break. And when he wasn't running the floor or kicking out for three, he was setting up guys on the block.

Jah out of the double team -> McConnell -> Grant slam https://t.co/uB5QJazS2Z

It's also worth noting how nicely Okafor -- he would have certainly gotten an assist if this was hockey -- worked out of that double team.

•    Canaan isn't McConnell's only competition at PG. The Sixers also added former Celtic Phil Pressey to the roster prior to Wednesday's game against the Bucks. He even got a little run, finishing with a rebound and assist in six three minutes.

•    Nik Stauskas didn't have his best night shooting. He was third on the team in scoring with 14 points, but shot just 26 percent (5-of-19, 3-of-14 from three). He also turned the ball over four times, including on a critical possession late in the fourth quarter with the Sixers down just one point. The Bucks hit a three on the next play to go up four points with under 50 seconds left.

Bucks crowd just tricked Canaan into thinking the shot clock was running out.

The Sixers will now head to Cleveland for a rematch against the Cavs, who beat Brett Brown's crew, 107-100, earlier this week at the Center. Tip from The Q on Wednesday night is scheduled for 7:30 p.m.