Dario Saric put on a passing clinic vs. Sacramento, with GIFs and stuff

There have been games when Dario Saric was knocking down his jumper this season, but Tuesday night felt like the most impactful version of him. And if we want to cut to the chase, his hockey assist in the fourth quarter was the highlight among highlights:

Just check out the face of Robert Covington, the Sixers’ other star in the 122-119 win over Sacramento. It really says it all: 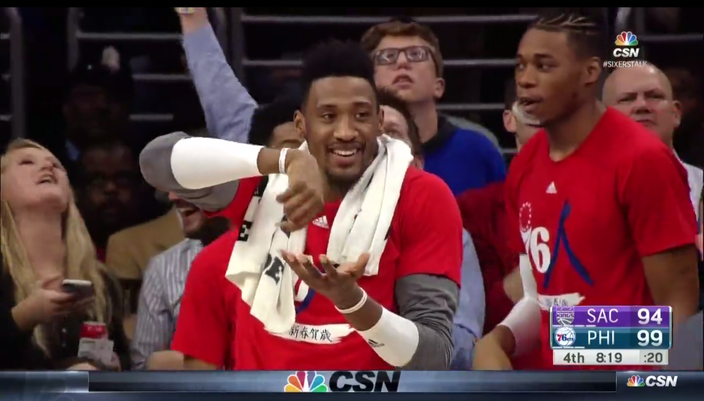 “I don’t know how to say it, but I expect when I throw that pass to Jahlil, maybe he will finish,” Saric said. “But he passed to Nik and it was a great play.”

Saric might be a little bummed that his great pass won’t show up in the stat sheet, but last night was him at his absolute best. Saric took advantage of a mismatch on both ends (DeMarcus Cousins) and scored 17 points on 8-11 shooting. Not the fleetest of foot, he can still attack a traditional center off the dribble.

But more than anything, Saric’s passing was both extremely creative and infectious. This no-look dime to Covington was sublime:

“I saw him before he was cutting,” Saric said matter-of-factly, summing up the type of vision that raises his ceiling as a player.

Saric finished the night with a scorching 158.3 offensive rating. Brett Brown saw the type of hot streak Saric was on, so he ran plays to get him the ball out of the timeout. This one worked perfectly, as Saric attacked Aaron Afflalo’s closeout and got Nerlens Noel a dunk:

“If you see anything, he is tough,” Brown said. “If he is anything, he’s highly competitive. And I think we’re seeing the versatility of a skill package whether it’s driving it, shooting it, posting it, that to me makes him quite unique when it comes to a team.”

The Sixers are still the league’s worst offense mostly because they lead the NBA in turnover percentage, but they do share the ball: Their 63.8 assist percentage is third in the league, per NBA.com. Moving forward, Saric can help foster a culture of making the extra pass.

A nice little bounce pass to a cutting Noel…

Saric has elite vision for a player his size. After the game, he made the point that the Sixers bench units often don’t feature a dominant one-on-one offensive player.

“In that case, we need to share the ball,” Saric said. “Try to move, try to open space for each other. And we did that well.”

Saric still has to make some improvements on the offensive end of the floor, but at least you were able to see a glimpse of his elite skill. More than anything, I am curious to see what the offense looks like when he shares the floor with another tall playmaker in Ben Simmons. Those two could be a lot of fun together in the open floor.