Millions of words have seemingly been spilled on The Process, but don’t let anyone tell you that it was anything but splendid for Fourth of July barbecues.

There were many methods to Sam Hinkie’s madness, but a major part of the plan was that when the rest of the NBA started frantically working the phones the first week of July, the Sixers largely put their feet up.

OK, that’s not fair. The excellent “Nik Stauskas trade” (the deal with no downside, Hinkie’s Sistine Chapel) went down late July 1st and that front office was likely doggedly looking for value around the league by leveraging their cap space. What they were targeting differentiated them from everyone else: future picks or young players who could be had for cheap. For the other 29 teams, free agency is largely about this upcoming year; for the Hinkie-era Sixers, it was all about three years down the line.

This summer, the Sixers finally dipped their toes into veteran free agent waters, signing three players of note. Over the next few days, we’ll have a primer on what each of them brings to the table. First up is the local guy, Gerald Henderson.

Who? Gerald Henderson, a 28-year-old, 6’4” swingman entering his seventh NBA season after five years in Charlotte and one in Portland. Before going to Duke, Henderson played high school hoops at Episcopal Academy, forming a memorable tandem with Wayne Ellington.

Contract: Henderson signed a two-year deal with the Sixers, worth $9 million in the first year and an almost completely non-guaranteed $9 million (per The Vertical) in Year 2. There is no need to mince words here: this was a bargain, a hometown discount. The contract is excellent value for a player of Henderson’s caliber in this crazy free agent market, and as of now, my guess is that he’ll make that $9 million here in Philly next year.

Considering how team-friendly the deal is for Philly, it makes Portland’s decision to pay Evan Turner $70 million even more head-scratching. The Blazers already had Henderson in the rotation, and he’s a better fit as an off-ball wing with Portland’s two star guards (Dame Lillard, C.J. McCollum).

Projected position: Right now, my best guess is that Henderson is the Sixers’ starting shooting guard on opening night, manning the 2-3 spots with Robert Covington. Regardless, he’ll sop up plenty of minutes in the Sixers’ shallow wing rotation.

What does he bring to the table? Let’s start with what Henderson struggles with: three-point shooting. Henderson is at 31.9 percent from deep for his career, although he bumped that number up to 35.3 percent last year with some strong work in the corners: 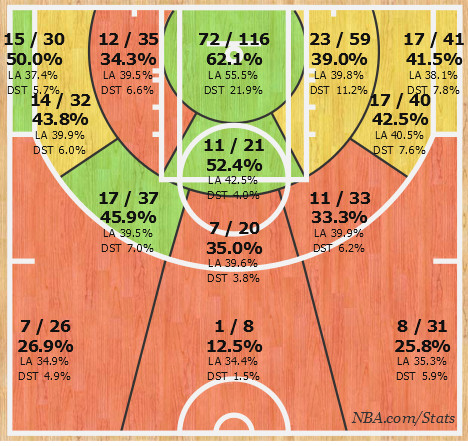 Henderson isn’t a traditional floor spacer, but the good news is that he does everything in his power to mitigate that not so insignificant weakness. He’s an extremely fluid cutter off the ball, and Terry Stotts used his talents very well within Portland’s 6th-ranked offense. Take a look at how he generally keeps moving within these “Zipper” sets:

Henderson is a perfectly capable secondary ball-handler, and while he won’t rack up a bunch of assists, he knows how to keep the ball moving and the offense flowing. He’s a bouncy athlete, too. If a defender falls asleep or simply forgets about him, Henderson can also cut backdoor and easily finish above the rim:

Perfect offensive players aren’t available for $9 million. Those dribble pull-ups that Henderson favors look a whole lot worse when they’re not falling. His shooting efficiency for his entire career is below average for a reason. There will be nights when the ball isn’t going in the basket, but on balance, he appears to be a good fit with Ben Simmons and the rest of the Sixers' young nucleus.

Above all else, the Sixers signed Henderson for competency, something he can provide.  He should be able to have a positive impact on the worst offense in the NBA with his cutting, shot creation (he can get off his shot and find higher percentage looks in a pinch than, say, Ish Smith), and general willingness to keep the ball moving.

Defensively, Henderson is far from a stopper, but his athleticism on the wings helped Portland defend two points better per 100 possessions when he played. He’ll likely see his minutes increase from the 19.9 per game he played last season. If Henderson can stay healthy (he underwent hip surgery 13 months ago), he should be up to the task in a relatively pressure-free environment.